University students 400 strong came out in force to the steps of the Legislature on Feb. 3 to let Premier Christy Clark know that student debt in B.C. is too high, and enough is enough. It was a diverse spread, with members of the general public standing in solidarity with student body leaders, university representatives from abroad, and students from every conceivable year and avenue of study.

For many, protesting wasn’t a question, but a responsibility. “It’s our one way of saying we don’t agree with the amount we have to pay for schooling,” says Natalie Fish, a third-year Nursing student. “If we do nothing, it’s like we’re voting for the system.” 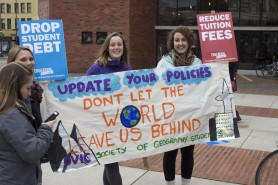 UVic Society of Geography Students demonstrators get the word out while preparing for the march. Photo by Myles Sauer 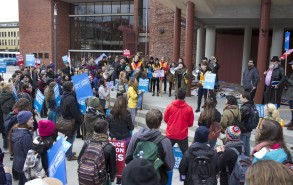 The crowd gathers for a final rally before beginning their march. Photo by Myles Sauer 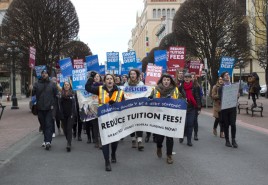 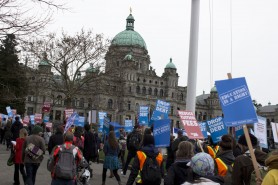 Students arrive at the Legislature. Photo by Gwen Rosser 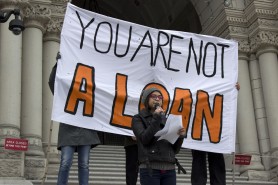