Practice makes perfect: A review of Nathan Fielder’s The Rehearsal 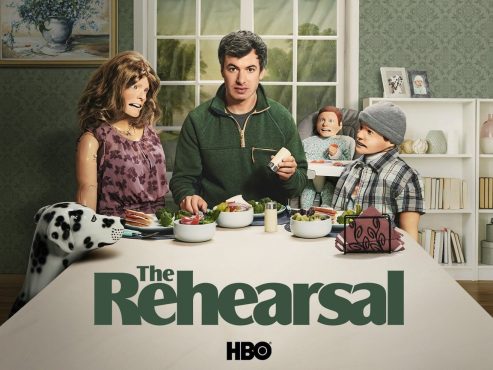 One of the biggest issues with The Rehearsal is that it’s almost impossible to explain to anyone what exactly makes it so great.

Nathan Fielder — the creator, writer, and star of HBO’s docuseries The Rehearsal — is a UVic grad who has had a cult-like following since the release of his Comedy Central show Nathan for You in 2013.

Fielder, like his comedy, can be odd and confusing at times. He’s awkward, insecure, and somewhat of a pathological liar. His brand of filmmaking lands somewhere between a serious docuseries and a prank show, blending the lines between fiction and reality. He’s so desperate to make sure social interactions go well that he is willing to practice them beforehand over and over again — and that is the premise of The Rehearsal.

The pilot episode has Fielder helping a man deal with a difficult situation that he has been putting off: telling his friend that he only has a bachelor’s degree, not a master’s. To do this, Fielder puts HBO’s lavish budget to full use, creating a life-size replica of a bar inside a warehouse. Actors are hired to be in the background and make the situation feel slightly less artificial.

With an actor hired to play the part of the subject’s friend, Fielder runs them through every possible outcome, allowing the man to be prepared for anything that might happen in the real situation.

While Fielder has an unmatchable skill when it comes to thinking up outlandish ideas like this, his true genius comes from his ability to find the most unique and idiosyncratic individuals who are willing to be a part of his show.

Throughout its short six-episode season, The Rehearsal goes through many drastic changes. It’s clear that the original ambition for the show was to do more large-scale experiments in public like what is seen in the pilot episode. But like many shows, it was heavily affected by COVID-19. Busy social settings were no longer possible, so the scale and size of the show shrinks down.

While many shows and movies let the pandemic affect their quality, The Rehearsal does just the opposite. Having limitations on what was possible allowed for creativity that never would have come to light otherwise.

Fielder has always tiptoed the line of morality with his work, as sometimes it can feel almost exploitative the way he uses willing participants as a joke. The Rehearsal is not free from this, but as the series progresses this concern is brought up and explored in a way that only Fielder could pull off.

If you are not a fan of awkwardness, cringe, or avant-garde docuseries, The Rehearsal may not be the show for you. But if you enjoy humor, weirdness, pure creativity, and a concept that is explored to its fullest extent every episode, you owe it to yourself to at least give the pilot episode a chance. Once you start, you might find it impossible to look away, and catch yourself rehearsing a coherent way to convince your friends to watch it too.