President and students: a divided relationship 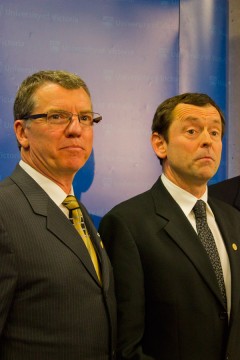 At the end of June, UVic President David Turpin will retire, and Jamie Cassels, a UVic law professor, will assume the post of UVic president. Many students, although aware of this change, do not fully understand the role of the university president. Some have questions about student involvement in the president’s selection and role in the institution.

Turpin, who was appointed in 2000, says university presidents run the large organisms of universities that meet the needs of a diverse number of stakeholders. The majority of students, however, most likely are not aware of the president’s involvement.

Political science major Sydney Scout, 19, says, “For me, I have no idea who the president is. I think it would be good for the president’s role to be more visible. There is definitely a division between students and the president.”

Turpin views this division of students and administration as a natural process. “When I was an undergraduate student, I had no idea, you know —  ‘department head? Huh?’ ” says Turpin. “It would surprise me if everyone did know.” A president’s role is successful, according to Turpin, if students have the freedom not to concern themselves with administrative issues. Students then have the ability to focus solely on their studies, and governance is not a concern.

The president’s main responsibility is to attend to the day-to-day administration of the university. Students, university employees, the local community, government and the university alumni are all invested in the university. For the institution to function effectively, their needs and expectations must be met through budgets and strategic planning. It is President Turpin’s role — soon Cassel’s — to work with each group and propose ideas on how to further university relationships and build the credibility of the University of Victoria.

Andrew Weaver, faculty member of the school of Earth and Ocean Sciences and deputy leader of the Green Party of British Columbia, finds the prospect of a new presidency refreshing. “The role of the president is to come in and bring some new ideas on the way stuff is governed,” says Weaver. “It’s healthy.”

This healthy process, however, may have fundamental problems. Weaver believes that it is imperative to involve students in the governing of a university, just as it is integral for undergraduates to be involved in a democracy. The problem lies in the procedure of choosing presidential candidates. Students have representation on search committees for various applicants; but the process is secretive to protect the privacy of those applying. Shortlisted candidates and their qualifications are not made public.

The private method of selecting appropriate candidates is the central area that could be improved, according to Scout. She says the appointment should be a public procedure. “It should be as transparent as the elections of the [UVic Students’ Society] UVSS members,” says Scout. “It’s a representative of our school in both cases.” The reality, however, is that only the student representative on the presidential search committee and those on the university Board of Governors may view the possible candidates for the entire student body. Knowing who is selected, therefore, is only possible after the appointment.

Although the process of choosing presidents may be an issue for some, Turpin strongly believes in the current system to select new administrators. “I think the university is in extraordinarily good hands,” says Turpin, reflecting on the appointment of Cassels. Cassels, according to Turpin, has strong leadership qualities that are effective in building an intimate community.

As of July 1, Turpin’s new community will be the Discovery Islands, where he will spend the summer reflecting on his next steps and work on projects outdoors. “My plan at this point is no plans,” says Turpin. “I’ll be sitting on the sidelines, watching and cheering on.”