A history of pro basketball in B.C. 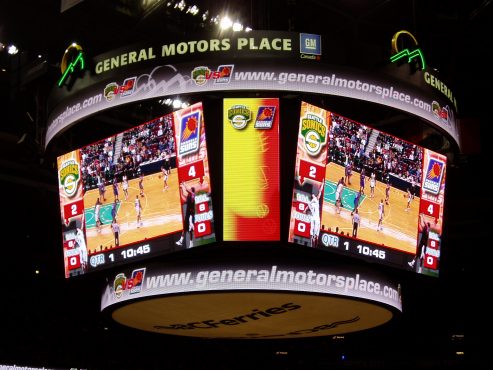 A pre-season game between the Seattle Sonics and the Phoenix Suns, held in Vancouver. Photo by Jennifer Stoddart via Flickr

The Toronto Raptors’ exhibition game on Thursday, Sept. 28, at UVic’s CARSA, will be one of the only times an NBA team has taken the court in B.C. in the past sixteen years.

But the Raptors’ intrasquad match won’t be the first time the province’s hoops fans watch as a team plays itself. Between the ill-fated Vancouver Grizzlies and the cross-border Seattle Supersonics, the region has seen more than its fair share of basketball self-destruction in the past two decades. Yet those 20 years have also witnessed the rise of a Vancouver Island player to the ranks of the sport’s all-time greats.

To put these highs and lows in perspective, here’s a walk down memory seawall through the key points in the history of pro basketball in and around B.C.:

But after the quick success of the Orlando Magic, who have just reached the 1995 NBA Finals in only their 6th season, the NBA overcorrects by placing heavy restrictions on its newborn Canadian twins. The Raptors and Grizzlies are barred from picking in the top five of the 1995 draft or receiving the top pick in the next two drafts. So instead of eventual Hall of Famers Kevin Garnett (Fifth, 1995) or Allen Iverson (First, 1996), Vancouver comes away with Oklahoma’s large son Bryant “Big Country” Reeves and Georgian (the state) forward Shareef Abdur-Rahim.

B.C.’s Steve Nash was drafted in 1996. Photo by Scott Mecum via Wikimedia Commons

The Grizzlies select Steve Francis with the second overall pick despite him so set against playing for them that he deliberately missed his shots in workouts. Over the summer, Francis forces a trade to Houston where he wins Rookie of the Year.

The fiasco solidifies the Grizzlies’ reputation as an undesirable destination for players and a second-class member of the league, arguably sealing the team’s doom.

Women’s pro hoops come to the northwest when the Seattle Storm debut. With no restrictions on their draft position, Seattle’s rough year-end record (six wins, 26 losses) allows them to draft Australia’s Lauren Jackson, who goes on to win three WNBA MVPs and two championships, all with the Storm.

For various reasons  — including the early pick restrictions, a low Canadian dollar, and even the Francis exit — the Grizzlies struggle and Canucks ownership group Orca Bay Sports sells the team. Purchaser Michael Heisley initially promises to keep the franchise in Vancouver but moves it to Memphis in 2001. In the 2001 draft, the Grizzlies trade disgruntled star Abdur-Rahim to acquire the third pick and select Spanish big man Pau Gasol, who wins Rookie of the Year and leads Memphis to three actual good seasons in the mid-2000s.

The Grizzlies finish their time in Vancouver with 101 wins (in 460 games) and the lowest win percentage in a city for any NBA franchise — but also give us some of the most iconic jerseys of any NBA franchise. So you know, you win some, you lose some.

Steve Nash wins the 2005 MVP award after leading the Phoenix Suns to the second-best NBA offense ever (according to cross-era comparison stat Ortg+).

Victoria-born Nelly Furtado raps, “Is it the truth or are you talking trash / is your game M-V-P like Steve Nash” on the iconic 2000s banger “Promiscuous.”

The next month, Nash wins MVP again. Coincidence? You decide.

Nash becomes the ninth player in league history to take the award in back-to-back years.

Supersonics ownership fails to get the city to pay hundreds of millions for KeyArena upgrades or a new arena, so new owner Clay Bennett files to move the team his hometown Oklahoma City for 2008–09. When it turns out that was his plan all along, despite the NBA’s requirement that he try in good faith to keep the team in Seattle, former owner Howard Schultz attempts to regain the team but fails.

In summer 2008, BC residents’ remaining option for seeing NBA basketball packs up and leaves. It takes with it a skinny rookie named Kevin Durant who goes on to win four regular season scoring titles, be named NBA MVP, and embarrass himself publicly by using fake twitter accounts to defend his free agency decisions.

North Vancouver’s Robert Sacre is drafted with the final pick of the 2012 NBA draft and goes on to play four years as a bench center for the LA Lakers before signing in Japan.

Kelly Olynyk, who starred as a 6’10’’ point guard for the South Kamloops Secondary Titans in high school, is drafted 13th by Boston. Olynyk plays four years mainly as the Celtics’ backup center before signing a four year, 50 million USD contract with the Miami Heat in July 2017.

Vancouver hosts pre-season Raptors games as part of the Canada Series of Raptors exhibition games outside Toronto. The Raptors win all three matchups against California opponents including a match against eventual NBA champion 2016-17 Golden State Warriors that sells out in minutes.

The NBA expands its season schedule to begin two weeks earlier and reduce back-to-back games. With fewer preseason games on deck, the Canada Series is cut and replaced with training camp in Victoria. 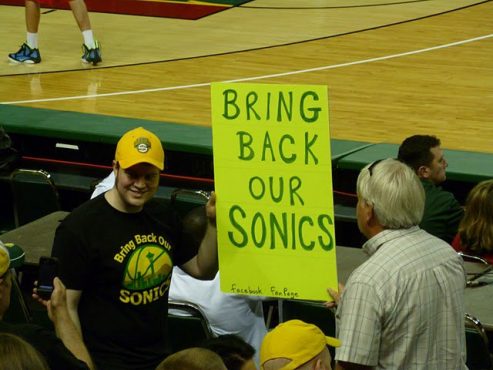 Fans at a charity basketball game in Seattle. Photo by Matthew Addie via Flickr

Much of what comes out of the NBA’s front office is part of a strategic dance between the league, the cities it bargains with for facility funding and the players it bargains with for share of revenue. So it’s hard to tell exactly how close the NBA is to returning to Seattle — commissioner Adam Silver won’t go beyond saying it’s on the shortlist of expansion cities, and won’t even commit to a timeline for expansion period.

But the conventional wisdom is that Seattle is first in line for an expansion team because of its controversial loss of the Durant-Westbrook-era Sonics combined with its top-15 market size.

In September 2017 the City of Seattle reached an MOU to renovate KeyArena with private funding to attract NBA and NHL expansion teams, which means Seattle will probably have an NBA-ready arena by the 2020s.

Unfortunately, Vancouver is unlikely to get in on the expansion action. Some argue that putting teams in both Van and Seattle is efficient for travelling, but since Seattle can pull in Lower Mainland fans for Mariners and Seahawks games, the NBA likely wants to test a new market (Louisville, Kansas City, Las Vegas, or Mexico City are apparently the main options along with Vancouver) rather than double-dipping in the Pacific Northwest.

Looks like it’s just Raptors exhibition games for us for the foreseeable future, so enjoy them while they’re here.