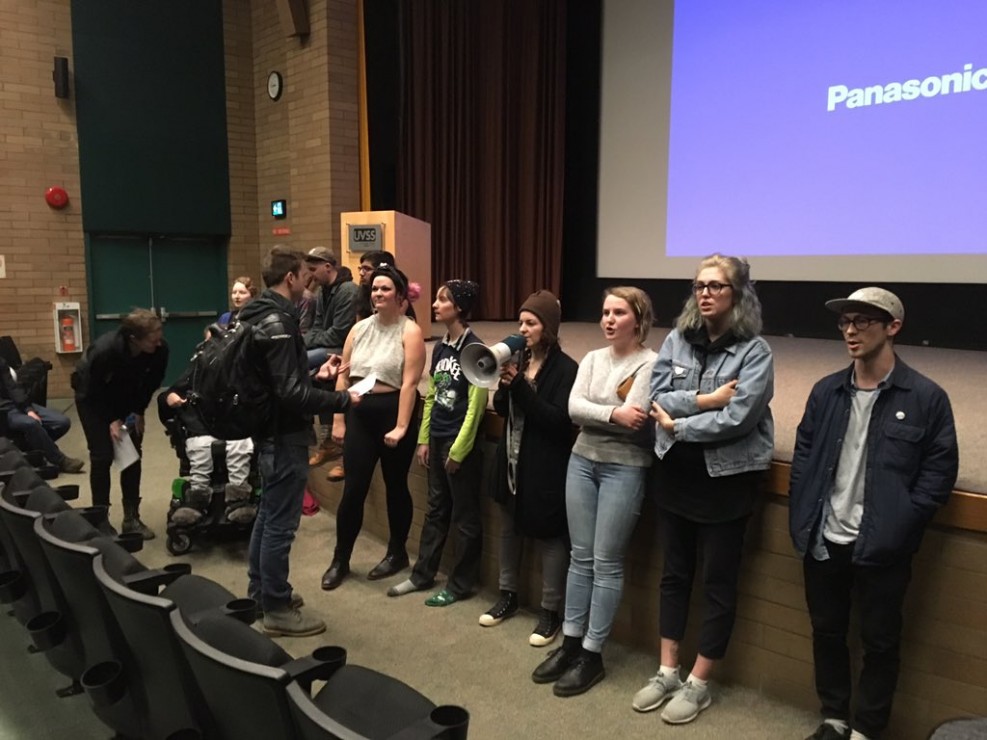 Members of the campus community were put at odds with one another after raucous protest interrupted an UVic Effective Altruism club event at Cinecenta on Wednesday, March 1.

The event, which featured a screening of a TED Talk on effective altruism by Princeton professor and ethicist Peter Singer followed by a Skype Q&A, was met with protest on the grounds of Singer’s past defense of the right of parents to euthanize severely disabled infants.

Protesters argued that giving Singer a platform was implicitly supporting the murder of disabled people, and that his views supported eugenics. Those in support of the event, meanwhile, argued protesters were infringing on people’s right to free speech.

Singer criticized for past writings

The UVic Effective Altruism club first formed in the fall of 2016. Effective altruism, as defined by club co-president Wray McOuat, is “the idea that charitable giving should be directed toward the most worthy, most cost-effective causes, as determined through rigorous evaluation.”

Singer, a key figure within the effective altruism movement, is widely known for his utilitarian perspective on ethics, animal rights, and euthanasia. It’s the latter of which that sparked outrage from disability advocates on campus — advocates such as Luka Garvin, who opposed Singer on the grounds that his views are seen as ableist.

Although Garvin reached out to the members of UVic Effective Altruism prior to the event to voice concerns, McOuat and Luke Frymire, co-president, ultimately decided to proceed as scheduled.

“It is a difficult decision [to proceed]. We’re not taking this lightly,” Frymire said prior to the event in an interview with the Martlet. “We totally respect what [protesters] have to say.”

“For me, it just goes back to the fact that we’re not promoting his views on [euthanasia] at all,” McOuat said. “It’s just all about solving climate change and all the stuff that we can all agree on.”

To Frymire, providing a platform for Singer was a matter of hearing all sides. “I mean, [McOuat and I are] trying to do good things here, everyone wants the best for everyone here, so just silencing one side of the argument is not a good way to find the best solution to all of these things.”

But Garvin said whether or not Singer’s views on euthanasia came up was irrelevant. “If it was, let’s say, [former Breitbart News executive chair] Steve Bannon, talking about the merits of recycling, would you let him onto UVic? I don’t think so,” they said. “Because Steve Bannon practices hate speech, and ableist speech is hate speech, no matter what you believe.”

Meg Tronson, Garvin’s support worker, said Effective Altruism should have done more to reach out to the disability community and work out alternative solutions.

“It’s just ironic that Peter Singer and the altruists community show a real lack of listening or meeting together to see what could be done differently.”

Prior to the event, a candlelight vigil was set up in the main SUB hallway in honour of the the Disability Community Day of Mourning, which was coincidentally on the same day. A chalkboard with the names of disabled victims of filicide — murder by one’s caregiver or family member — stood on display for passersby to see.

A candlelight vigil in honour of the Disability Community Day of Mourning is set up outside Cinecenta in the SUB. #uvic pic.twitter.com/HTqe8Nz94U

As people slowly entered the auditorium, a small group of students stood on stage with a microphone and read out a list of names of disabled people killed throughout 2016 and 2017.

“People who were their caregivers, who were meant to provide stability and care and love, decided these people weren’t worthy of life,” said Tareem Sangha, one of the students on stage.

Effective Altruism attempted to begin the TED Talk at 3:30 p.m., but were temporarily deterred by the resounding vocal response from the protesters. After a few minutes, they proceeded anyway, with the video’s captions on and sound amplified to compensate.

What began as two conflicting defenses of free speech soon hindered discussion of any kind, as the Effective Altruists and protesters battled with the volume to deafening proportions. Protesters used a megaphone to read prepared text to the audience, and numerous audience members shouted back at them to leave.

One protester even temporarily unplugged the adapter connecting Effective Altruism’s computer to the projector before fleeing out the side door of Cinecenta. The club was able to quickly start the video back up with a replacement adapter.

All the while, Singer’s TED Talk and Q&A continued, and the room grew cacophonous. Shouts of support for Singer’s free speech were met with chants of “eugenics is hate” and “disabled lives matter,” and neither side showed any signs of backing down.

“It’s a trainwreck,” said one student in the audience. “I wanna leave, but if I leave now, [the protesters] get their way.”

At one point, campus security entered the auditorium and spoke with protesters about taking away their megaphone, though they left shortly after without doing so. Saanich police had also been called, but were quickly called off.

Keith Cascon, manager of campus security, said there was “a brief second” where it looked like protests would escalate, but when they didn’t, police intervention was deemed unnecessary.

Cascon said that Effective Altruism had reached out ahead of time to let CSEC know there would be a protest during the event.

“We told them that if there are any issues . . . to give us a call,” Cascon said. He also explained that campus security respects everyone’s rights to free speech, including protesters.

Despite the stated focus on the effective altruism movement, Singer was in fact asked to address his views on euthanasia, but his answer was inaudible over the din of the auditorium. Though the club did record a portion of the event, the recording of Singer’s answer has not been made publicly available as of yet.

The Q&A wrapped up just before 4:30 p.m., about half an hour before the event was originally scheduled to finish. Cascon said campus security had suggested that Effective Altruism find a way to wrap the event up early rather than continue for the full length of time.

Even after Q&A had ended and the audience had largely dispersed, Garvin and their fellow protesters lingered at the front of the stage. “That was emotionally draining,” Garvin said as other protesters calmly discussed plans for the evening.

Protestors are still here. Some audience members sticking around as well. pic.twitter.com/jH36qA11PH

On the other side of the room, Effective Altruism members were in a similar bubble of post-hysteria high.

“I’m kinda disappointed that we couldn’t do the event the way we wanted, but I’m still doing well,” said McOuat. “The turnout was wonderful, absolutely, I’m very happy with it.”