The lack of a sexual assault policy on B.C. campuses has become a public issue in recent weeks, and it’s only going to get bigger if a UVic activist has anything to say about it. 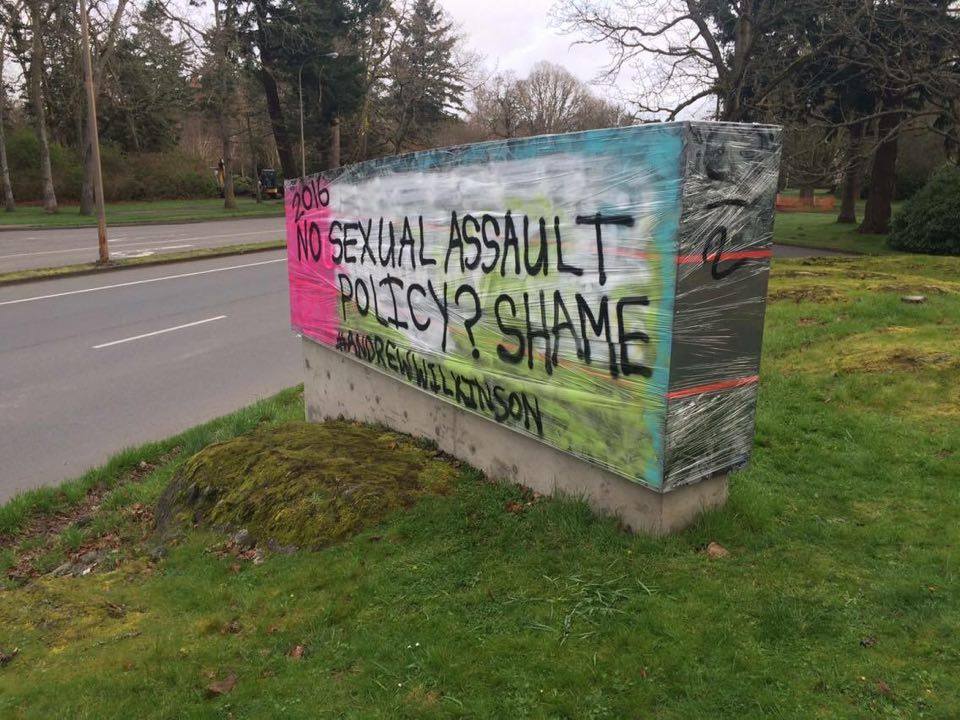 This sign by Henderson Road was used as a tool to protest the university’s response to recent sexual assaults. Photo provided by Daphne Shaed

The graffiti went up around 7:45 a.m., and according to Shaed, was torn down around 8:30 a.m. “Security services tore it down pretty quickly,” she said. “They respond quicker to graffiti than they do to sexual assault on campus.”

And if you’re worried about damage to the sign, don’t fret: Shaed took care to ensure no paint got on the sign itself. “The sign was not damaged in the process,” she said.

According to Shaed, the protest was meant to “speak to the fact that there’s a real lack of support and policies on campus and in campuses in British Columbia.”

Shaed was referring to a lack of any provincial framework for how universities respond to incidents of sexual assault — a lack that was made clear earlier this month when a student was arrested after allegedly assaulting four other female students.

The issue is starting to gain traction at the provincial level, however; on the same day of Shaed’s protest, Andrew Weaver, MLA for Oak Bay-Gordon Head and Leader of the B.C. Green Party, tabled the Post-Secondary Sexual Violence Policies Act. According to a press release, the bill “aims to address the pervasive occurrence of sexualized violence plaguing universities and colleges in British Columbia,” and would make universities and campuses legally responsible for developing and maintaining policies that “provide education for students, support for victims, and work to prevent the occurrences of sexual violence.”

Shaed said the timing of protest was an accidental but welcome coincidence. And judging by the response on social media, the message was heard loud and clear: the UVSS posted a photo on its Facebook page and called for members to “stop the violence, end the violence [sic]; a thread was posted on a UVic subreddit with a photo; and of course, students were all over it on Yik Yak.

The publicity all works to campus advocate’s advantage, Shaed said. “It’s great that we’re seeing these things that are coming forward . . . because of the pressure that people like myself are putting on the institutions and on the government to move forward with something. And it’s been a long time coming.”

“There needs to be a way for us to address these things more swiftly,” she said.

Shaed’s been previously involved in the gender-neutral washroom protest that took place on Feb. 15, and the rainbow crosswalk paint protest on Feb. 16. But even if things start moving at the provincial level, don’t expect Shaed to quiet down. “I’m quite forward about [protesting],” she said. “I’m going to continue to do activism on campus.”

“As long as there’s one person that comes into my office [looking for help], then I’m going to continue doing the work that I do.”