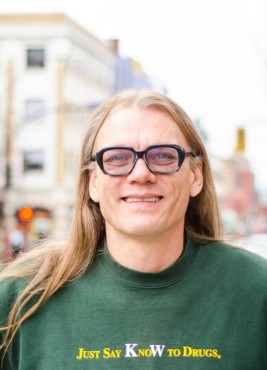 In 2009, Owen Smith (no relation to Ted) was a baker for the Cannabis Buyers Club. In 2009, Owen was also arrested for possession of THC with the purpose of trafficking. The police interrupted him while he was making baked goods and skin products for the patients of the Cannabis Buyers Club who wanted to receive treatment, but couldn’t (or wouldn’t) inhale smoke to receive their medication.

It has been a long and arduous journey, but after many hearings the B.C. Court of Appeal gave a split decision of 2-1, and according to Ted, this will be the first medical marijuana case to reach the Supreme Court of Canada (SCC).

Ted Smith is the founder and former owner of the Cannabis Buyers Club. He has been right beside Owen through the whole process and recently found time to talk about the upcoming trial and the reasons to pursue it.

Adam Hayman: After being successful in the B.C. Court of Appeal, who made the decision to appeal to the SCC? And why do you think that decision was made?

AH: Being an election year, a Liberal government would approach the SCC ruling differently than the Conservative government. Is it frustrating facing the reality of that?

TS: Well, I don’t know about that, really. You know, the Liberal government now claims to be pro-legalizing. The old program, which was a very poorly written program, was designed by the Liberal government in the first place, and so I think the bureaucrats in Health Canada would be fighting us here ‘cause really they’re protecting the drug approval process and the pharmaceutical companies.

AH: After the trial, what’s next for you, Owen, and the Cannabis Buyers Club?

TS: Well, in some ways things have changed a lot since the arrest. Owen doesn’t work for the Buyers Club anymore. Owen works part-time with me at the Cannabis Digest newspaper, and there’s online stuff. He’s writing blogs and he actually does the layout in the newspaper too . . . After we won at the B.C. Supreme Court, the police took the decision to Revenue Canada and they came after me for not paying back taxes, so I declared bankruptcy against a quarter million dollars and turned the Buyers Club into a non-profit society and walked away from it. So, it’s really functioning by itself. In the mean time I’ve also published my textbook for Hempology 101. So, I’m getting into more of a national and international leader in the movement now, helping other clubs and working with the newspaper on a multitude of issues.So is Owen, and I imagine after this court case Owen is going to have any number of opportunities with people, so he can kind of freelance after this . . . The Buyers Club is going through some radical change as a result of this decision. It’s going to be really put into the spotlight. The club makes a lot of their own products; they’re very unique. The club is going to grow with it’s membership and its product line. There is also a lot of research going on. There are researchers getting involved with the club now.

AH: What are some of the main research topics that have been presented to you so far?

TS: A lot of it is strain related. Each strain has a different cannabinoid profile and terpene profile so extracts have dramatically different effects depending on processing and which strain is used . . . Looking into the different  types of products you can make from cannabis as well. Suppositories right now seem to be an interesting direction to go. My girlfriend Gail recently just about died from cancer, actually. She was in the hospital and she wasn’t able to eat anything and we started giving her cannabis suppositories and they had immediate and obvious beneficial effects. So there are suppositories, eye drops, topical uses . . . There’s a whole range of topical products, so doing the strain research is just the beginning to allow all these other kinds of studies to happen.

AH: With this trial breaking past the barrier of the SCC, what other important medicinal marijuana patient issues do you think could be taken through this process now that you guys kind of blazed the trail?

TS: There is an injunction that is being heard in Vancouver right now over patients trying to grow their own [medicine] and the government trying to stop that. The ability to grow your own medicine is critical to many patients, like my girlfriend, who couldn’t afford to purchase the amount of pot she uses. They kind of go hand in hand; in fact, what’s being called the Allard injunction has included the argument of extracts in it, so that’s very tied together, so if patients are allowed to grow their own medicine and make extracts legally it’s going to save a lot of lives and save a lot of money. So that’s the next big thing. Hopefully that will get to the Supreme Court as well.

AH: How far do you think Canada, or perhaps B.C., is from joining the ranks of Washington and Colorado?

TS: Well, B.C. won’t do anything on its own unfortunately although we certainly are seeing less enforcement here in British Columbia, which is nice, but it’s not even uniform across B.C. though, right? You go to Vancouver and there’s a dispensary every other block and then you go to a more conservative town like Prince George and they’ll bring a shotgun to your head if you open a storefront. But certainly we have an increasingly tolerant attitude towards it here and it’s wonderful to see. I think people like myself have been working in the community long enough that it has become pretty apparent that cannabis use doesn’t cause people to become degenerates—quite the opposite in fact. We can be outstanding members of our community, so I think we are going to see legalization across United States and the world. That’s why I think this case here can be—and it’s already building up to be—an important moment in Canadian cannabis history. At this point we’re really going to be turning the tide here and the absurdity of the laws and regulations are going to be obvious for everybody. So, this is going to be a real wake-up for the public.

This interview has been edited and condensed