Jamie Cassels, centre, at a Raptors basketball game in 2017. Photo via APShutter

The presentation, delivered in the atrium of the Continuing Studies Building to a packed house, ran thirty minutes on the dot. Afterwards, the audience was invited to ask questions and fill out a feedback form about the strategic plan.

Since the official launch of the strategic plan only took place in September, the update was more of a reiteration of the original press release explanation of the plan. But, due to intensive consultations on the program via feedback from the Thought Exchange Program  — an online forum for the community to provide input about UVic’s challenges, opportunities, strengths, and weaknesses — there were some areas for Cassels to expand upon.

Now that the school semester is making a transition from 2017 to 2018, Cassels had prepared a thematic analysis in response to the feedback received in the fall term.

At the update, Cassels recognized that, in a general university setting, core developmental changes — like ones suggested in the Strategic Plan  — are worth critical discussion, research and academic excellence require effective communication of needs in all departments of study, and accommodation for students and faculty is vital for both short and long-term stability within the community.

Certain steps and commitments of importance were brought up during the update— many of which Cassels primarily introduced in the form of hypothetical questions, rather than statements of intent. Although the questions raised were intentionally left open, they were meant to imply that UVic attentively assesses priorities as a community and encourages proactive discussion. In effect, the relevant ideas that emerged could be transformed into goals and strategies for UVic to accomplish.

Cassels insisted that the strongest themes from the consultation were “People and Values”; he spoke often about UVic’s commitment to equity, diversity, inclusion, collegiality, and collaboration. 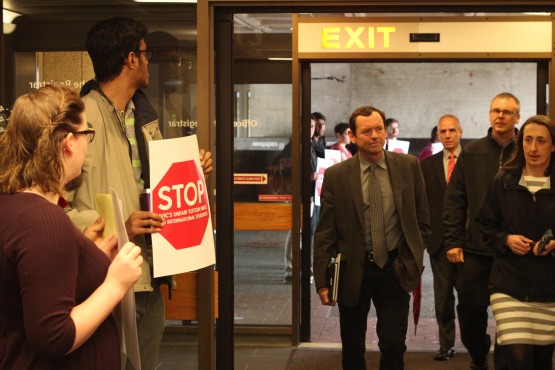 “The idea that our organization is large enough to have a very substantial impact and to offer multiple pathways, and yet there still is that human scale to it that allows for personal interaction,” Cassels noted in favour of shared values between the community and the campus. In essence, Cassels was referring to UVic’s focus on both students success and academic research, while actively demonstrating an appreciation of place.

General research successes, energy infrastructure, and development projects — including the Queenswood property being repurposed into an oceans and climate campus hub for Ocean Networks Canada — were brought to attention. On the subject of social and environmental sustainability, Cassels noted that UVic is serious in their commitment to the Indigenous community and reconciliation.

Cassels spoke in brief about the success of the fall term, strong enrollment rates, and that students report to feeling like they’re getting a high quality education.

“What do we do about amplifying our teaching excellence and our concept of dynamic learning that empowers students for a successful future, that transforms them, that gives them an engaged experience, and that prepares them for global citizenship?” he asked.

In terms of structure and implementation of the strategic plan, Cassels advocated how public input can definitely help solidify and implement the ideas that create an outstanding post-secondary institution.

He added that UVic is already a leading school in the country, but he advises “it’s probably a goal for UVic where we could become Canada’s leader in relation to that kind of learning experience – which very importantly includes the integration of research and education.”

During the process of strategic plan implementation, Cassels said “there will be strategies around the co-curricular and support programs that focus on the student developmental experience and that focuses on resilience, persistence, and success.”

On the topic of how UVic’s physical place can benefit the community, Cassels made reference to the ideals of the Campus Plan — how the land is conscientiously used by the institution. He suggested that the goals of the strategic plan can be better achieved if they implement elements of the campus plan that make the campus “more animated, more livable, a place that is a real magnet for people who come and create that collegial and collaborative environment.”

Cassels made it clear that the campus should be concerned with whether it can be more ambitious in regard to creating sustainable futures that will positively shape the country that we want to live in.

The update ended with an assurance from Cassels to the crowd that the UVic Senate hopes to release a draft plan by mid-February, which will be they will take feedback on before a final plan’s release in May 2018.