The University of Victoria Students’ Society (UVSS) Board of Directors held their Annual General Meeting (AGM) on Thursday, Oct. 12.

It’s 2:30 p.m. and everyone is still grabbing pizza. There are not many people at the UVSS AGM yet but our live-tweeting is officially begun! pic.twitter.com/rvoOJLkS4O

After briefly meeting quorum (113 students), it was quickly lost in just under five minutes as students left the room. As such, the majority of the agenda had to be skipped, as without quorum all special resolutions cannot be proposed or voted on.

Quorum was just met. There is a round of applause.

No quorum means that special resolutions, including the proposal to implement Faculty Directors, cannot be proposed, let alone passed. There are a few things the attendees can do, though. For example, the room just amended a typo.

The meeting continued with a limited agenda.

Following a territorial acknowledgment, approval of the meeting’s chairperson, and adoption of the limited agenda, Director of Finance and Operations Curtis Whittla gave a presentation on the UVSS’s finances, specifically highlighting the 2017-2018 audit of financial statements as well as the 2018-2019 budget proposal.

Curtis Whittla, Director of Finance and Operations, is now presenting on UVSS finances – the audit and the budget. Students pay $74.35 per semester, per student, to the UVSS.

Whittla’s presentation broke down the $74.35 each full-time undergrad student pays to the UVSS, showing members that $21.80 of this amount goes toward general UVSS operations, $18.95 goes to funding the Board of Directors and their initiatives, and $33.60 goes to funding advocacy groups, Clubs and Course Unions, and affiliated organizations like CFUV and the Martlet.

Whittla  also broke down the total revenue brought in by the UVSS from operations and businesses such as Food and Beverage services, ZAP Copy, and Subtext. He then compared these figures with the total expenses incurred by the UVSS in carrying out their operations.

According to the presentation, UVSS Food and Beverage Operations have not turned a profit since 2013-14, while Catering and Conference services continued to generate revenue. 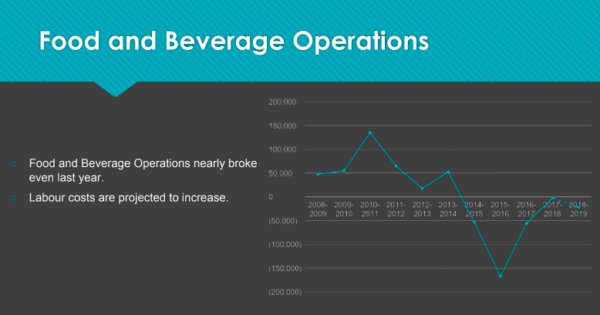 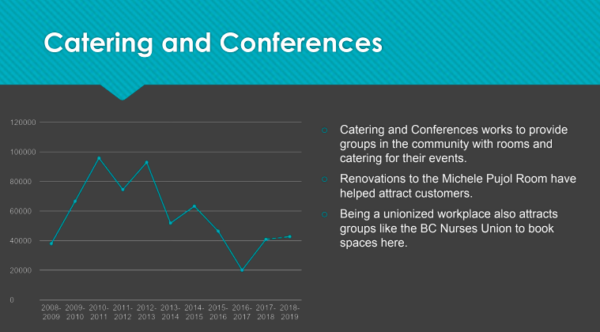 For Cinecenta and Munchie Bar, 2016-17 proved to be their most profitable year, followed closely by 2017-18. According to the presentation, although Cinecenta does not generate much revenue, Munchie Bar — which serves as the theatre’s concession — offsets this. 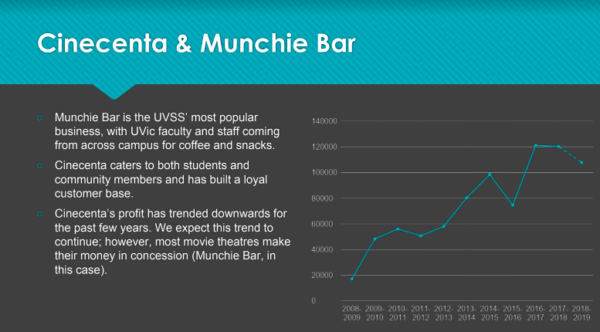 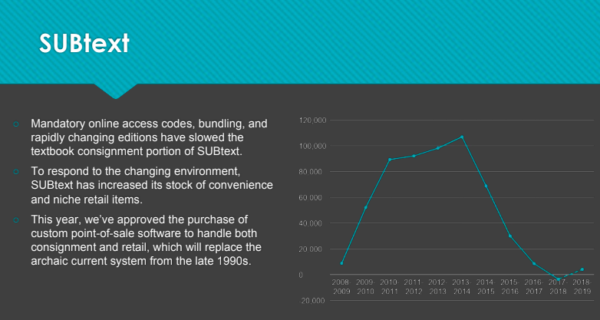 Whittla continued the presentation by pointing to the health and dental insurance plans and the university bus pass as other expenses paid for by the UVSS.

Despite losing quorum, attendees were still able to adopt the 2018-19 budget, and receive the 2017-2018 audited financial statements.

The motion has now been brought forward to adopt the draft budget for 2018-2019.

A motion is brought forward to approve the audited 2017-2018 financial statements. The motion passes.

Following Whittla’s presentation, each Lead Director gave a update on what they’ve accomplished over the past few months.

Pierre-Paul Angelblazer, Director of Outreach and University Relations, spoke about upcoming and recent events hosted in the SUB for the municipal elections, while Noor Chasib, Director of Events, talked about various initiatives he is organizing to engage students from first year to fourth year. He also mentioned the possibility of a ferry shuttle service the UVSS is hoping to offer over November reading break to ease the hassle for students who will be transiting from the university to Swartz Bay during this busy time.

Next up, reports from the Board. First up is Angelblazer, speaking of recent outreach events organized by the UVSS, including the various municipal election debates and candidate fairs they have recently held.

"We've been increasing our focus and commitment to the student experience," he says, stating that the UVSS has been working to ensure engagement of students from first year to fourth year.

Chasib also says they're looking into implementing a November-reading-break-specific ferry shuttle service. For anyone who has had to transit over the holidays, you'll know this is an issue.

Director of Campaigns and Community Relations Ainsley Kerr then discussed a few of her recent initiatives, including the new Peer Support Centre in the SUB and several events that occurred over Sexualized Violence Awareness Week earlier in October.

Now for an update from Ainsley Kerr, Director of Campaigns and Community Relations. "Campaigns, as always, has a lot on the go," she says, and points to the new Peer Support Centre located in the basement of the SUB.

Next up was Isabella Lee, Director of Student Affairs, who livened up the room with her speech, speaking enthusiastically about Clubs and Course Unions Days. Lee also mentioned that she welcomes feedback from students, and encouraged attendees to reach out to her with their constructive criticism.

Now for an update from Isabella Lee, Director of Student Affairs! Lee is very enthusiastic as she speaks of Clubs and Course Unions Days and a new website coming in the future.

Whittla followed with an additional update on finances. Most news regarding Whittla’s portfolio was previously covered during his presentation, so his update at this time was brief.

Question period passed quickly, as just one student had questions regarding student engagement and how students can get involved with the new Peer Support Centre.

Question period! The Martlet's Staff Writer Emily Fagan has a question about engagement — What has the UVSS done this semester to improve attendance and engagement at this year's AGM?

Fagan has another question — What's the best way to get involved or find support with the Peer Support Centre?

The meeting ended promptly after question period, but the Martlet took a moment to speak with Angelblazer on the issue of UVSS student engagement.

Speaking on the subject of reaching then losing quorum, Angelblazer said, “It was personally disappointing. We had quorum for three minutes less than last time.”

Angelblazer was one of the main proponents of a motion regarding Faculty Directors that had been put on the original agenda for the meeting. If passed, the implementation of this policy would mean that some positions on the UVSS board would be restricted by faculty. This change to the UVSS’s governance structure was to be voted on at the AGM, however because quorum was not met, the motion could not even be brought forward, let alone passed.

Regarding whether he would continue trying to implement Faculty Directors, Angelblazer said that it would depend on when the UVSS’s Semi-Annual General Meeting (SAGM) would be held.

“It would be be a pretty big change, but if we’re able to have the SAGM in January we can have it on the agenda again, but any later than that it would have to be something picked up by the next board,” he said.

As for improving student engagement with the UVSS, Angelblazer said that it’s not such an easy thing to track.

On how [the problem of student engagement] can be solved, Angelblazer said that this was the million dollar question.

“If an election gets 20% voter turnout, is that high engagement compared to that board getting elected and them not making quorum at any of their general meetings — does that mean … better engagement, or not?

Angelblazer talked about the actions that did and did not work in getting people to attend the AGM this time around — the location, he said, worked well, however the time did not.

He also pointed to the success of tabling in the quad earlier in the day as an outreach method.

“We’re never going to get 100 per cent engagement. That’s not a realistic goal … I would say the smaller level of government that you go down, the less voter turnout there is,” citing lack of engagement in municipal elections as an example of this problem.

“I think people care even less, because the stakes are a lot lower,” he said.

As for how this problem can be solved, Angelblazer said that this was the million dollar question.

“It’s hard to get people to care when it doesn’t seem like it’s something that necessarily affects them,” he explained. “It’s trying to show how the decisions that are taken by the students’ society — how those [decisions] impact [students].”

The next UVSS Board Meeting will be on Oct. 15 at 6 p.m. in the Vertigo room of the Student Union Building.