Racist remarks lead to cover up of chalkboard in library foyer 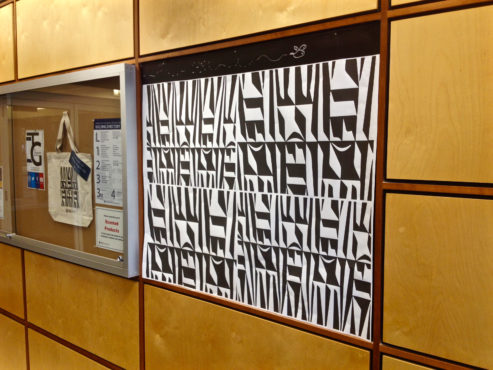 The covered up chalkboard in question, where a bee has still found space to fly in the sliver of free space that remains. Photo by Mike Graeme, Senior Staff Writer.

Due to the recurring appearance of racist remarks, the communication chalkboard in the foyer of the McPherson Library at UVic was covered up on Oct. 16.

“It didn’t go unnoticed. Let’s put it that way,” says Lynne, a library worker at the main desk, who asked the Martlet not to use her last name.

Lynne says the chalkboard was an important part of her daily library life and served as a space to connect with other like-minded individuals.

“I’m a beekeeper and so there was somebody that was always writing about the bees out there [on the chalkboard]. I kept wanting to catch them so I could have a discussion about bees and then next thing you know some guy decides to put some racial slurs up there and then [the UVic Libraries] just took it away.”

The removal of the chalkboard is reminiscent of the Third Space Zine Wall Project, which was a giant whiteboard erected outside the Student Union Building (SUB) in March 2017 — after Donald Trump’s inauguration — to generate discussion around challenging white supremacy. However, the project also became a platform for hate speech and was quickly taken down.

Shailoo Bedi, director of academic commons and strategic assessment at University of Victoria Libraries, says, “UVic has made it very clear that ours is a welcoming and inclusive campus and that we will not tolerate messages that affect the well-being of our campus members.”

“Through consultation with Campus Security Services and the Equity and Human Rights office, UVic Libraries decided to remove the chalkboard to ensure that we are supporting our university policies and values.”

But Lynne says there are other ways that the issue could have been dealt with, adding that the main issue involved someone repeatedly writing racist comments related to China.

“The guy kept coming back. We’d erase it and then he came back,” she says.

“If they just had a conversation with the guy it might have been [resolved]. Instead of doing that they [covered it up].”

A conversation with the man writing the comments did in fact happen. But it wasn’t a calm one, says Michael Nyquist, a fourth-year English student who happened to walk by the chalkboard the day it came down.

Although Nyquist doesn’t agree with racism or hate speech, he agrees with Lynne that the university missed an opportunity to get to the root of the issue by simply removing the medium.

“I just walked out of the library into this crazy, tense situation where four people were standing around, and a librarian was furiously erasing the chalkboard and another guy was just looking kind of distressed and infuriated,” he says.

Like Lynne, Nyquist had a long-standing connection with the library chalkboard, and incidentally had been a participant in the bee conversation that Lynne spoke of.

“To give some context for this super tense situation, about a week prior, maybe about two weeks prior, people had been drawing these pictures of bees and wasps on the chalkboard,” Nyquist says. “It was really lovely. I actually added to the conversation a bit. I put my two cents one day of the week.”

After seeing the confrontation, Nyquist approached the group to inquire about the situation.

“I asked the one guy who looked really infuriated and he was saying that he wrote something about the Chinese government and he’d rather live in a free state than a security state — a military state,” Nyquist says.

The chalkboard incident marks the one year anniversary of the white supremacist posters that were posted around UVic in October 2017.

Bedi did not share the specific comments on the chalkboard with the Martlet.

“I won’t want to add more hurt and pain in reproducing them through this article,” she says.

She did disclose that there were hate messages about China as well as references to Indigenous peoples.

Although Nyquist doesn’t agree with racism or hate speech, he agrees with Lynne that the university missed an opportunity to get to the root of the issue by simply removing the medium.

“It tramples the conversation. It takes away opportunities to confront racist views and opinions and ask why they happen,” he says.

“It’s not like by erasing something you’ve changed anyone’s opinion. The opinion’s not going to go away. The person still exists with that feeling and opinion, and knowing why they feel that and trying to get them to communicate it in an open space is far more important than silence.”

Nyquist decided to keep in touch with the student who wrote the chalkboard comments and they have been communicating via text.

Nyquist says the student has sent him news articles to help him understand their point of view. One of these stories, published in The Globe & Mail, said that Chinese military scientists have been partnering with Canadian universities to study military tactics and to bring that knowledge back to China.

While Nyquist acknowledges that it’s not constructive to write comments that might make people feel uncomfortable with their ethnicity or culture, he also thinks that public spaces for communication are important in our algorithm-driven online world.

“A lot of things that are going on conversationally in the world happen online. And online is such a bubble,” he says. “Online forums get so streamlined and it’s so easy to fall into conversations that you agree with and it’s just self-propagating ideas.”

But Bedi says the library is not the place to be having uncomfortable conversations that threaten people’s feelings of safety.

“The atmosphere of the Mearns Centre-McPherson Library is congenial, collaborative, and supportive. It is a comfort to our university community that UVic Libraries is a welcoming, safe place to study and engage with friends while supporting the academic ambitions of everyone using our resources and facilities.”

“I think in some weird, warped, and twisted way, everybody’s thoughts and feelings in the world are valid. Even if those opinions are potentially violent or oppressive, they are valid because they’ve experienced and felt them,” he continues.

“It’s more important to understand why they’ve come to those conclusions than to cut them down.”

The chalkboard incident marks the one year anniversary of the white supremacist posters that were posted around UVic in October 2017. The posters read “(((Those))) who hate us will not replace us,” and were likely directed at people of Jewish ethnicity, as Neo-Nazis use triple parentheses to refer to Jewish people in online forums.

On Nov. 12, UVic Pride led a walk to tear down white supremacist messaging that has recently been popping up around Victoria. Their mission was to replace the propaganda with posters that promote inclusivity.

It is safe to say racism has had a consistent presence in UVic’s public spaces, and opinions remain mixed on how best to deal with the issue.

For now, a bee drawn with chalk has still found space to fly in the sliver of  chalkboard that was missed by its paper plastering.