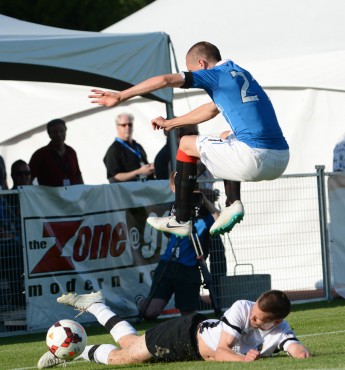 In front of an estimated 6 000 fans, many of whom had travelled from across western Canada and beyond to see their beloved Glasgow side, Rangers came away with a 2-1 victory thanks to a pair of heads-up first-half goals.

There was no shortage of fanfare for what was easily one of the biggest sporting events in Vancouver Island history. The capacity crowd was treated to a perfectly executed skydiving performance prior to kickoff, followed by halftime entertainment in the form of a local bagpipe regiment accompanied by traditional Scottish dancers.

The Scottish side kept up the pressure, and in the 10th minute a pass from Ian Black found its way through a group of players in the box before landing at the foot of Calum Gallagher. The 19-year old was able to jam the loose ball home to provide Rangers an early edge.

The Highlanders didn’t let the early setback get to them, however, and just two minutes later brought the game back level. A great individual effort from Cam Hundal allowed him to shake off his defender before burying the equalizer in the left side of the net.

Rangers never lost control of play though, and just before the half-hour mark found themselves back in the lead. A long shot in the 29th minute forced Elliott Mitrou into giving up a large rebound. In an effort to pounce on the ball, Rangers forward Nicky Clark fell to ground, but with Mitrou unable to reset after the shot, Clark was able to chip the ball in while on his back to put the ‘Gers’ ahead.

The 2-1 scoreline held up through halftime and beyond. The Highlanders had a pair of solid chances in the final 25 minutes, but a shot just wide right from Carlo Basso in the 67th minute was followed up soon after by a point blank save by Rangers goalie Steve Simonsen on Hundal.

The final whistle brought with it raucous cheering from Rangers supporters, whose consistent chanting and applause would fool many into thinking this was much more than an exhibition game.

Rangers defender Darren McGregor was in awe of the fan support so far away from home. “It’s unbelievable. I’ve come from St. Mirren which are a relatively small team in Glasgow. To come to a team like this and see the support worldwide, it’s incredible,” said McGregor after the game.

This should serve as no surprise however to anyone with knowledge of Rangers organization and their history. Even when the club was demoted to the Third Division and forced into insolvency in 2012, fan loyalty never wavered.

“I really take my hat off to these guys,” McGregor said about Rangers’ loyal backers. “The one thing they’ve done through all the ups and downs is they’ve supported the team. They’ve always turned up whether it’s away or home or in a different country. They’ve been outstanding.”

Scotsman and Highlander Blair Sturrock were presented with the season MVP award after the game. The recognition was well earned by the Dundee native, as Sturrock led the team in goals and shots during the 2014 PDL season.

Sturrock was understandably pleased to see his hard work recognized. “I’m happy,” said the forward after the game. “I’ve worked hard for the fans and I’m happy to have it. It’s great.”

Sturrock was also optimistic that the display would serve to grow Victoria’s soccer fanbase in the future. “It’s great for the fans to get them more excited about soccer,” he said.

“In seasons to come as Highlanders grow, maybe more and more fans come and this sort of scene could be every weekend,” concluded Sturrock.