The day after he was sworn in, Prime Minister Justin Trudeau announced that the long-form census would return in 2016. The long-form census was repealed by former PM Stephen Harper in 2010 due to the claim that the 61-question form was an invasion of privacy. In an effort to fulfill his promise of evidence-based policy, Trudeau is bringing it back.

During the election, all opposition parties promised to bring back the mandatory long-form census. The removal of the census is regarded by UVic history professor Dr. Eric Sager to be “one of the biggest mistakes in recent decades by a government at any level in Canada.”

“The census is the single most complete portrait of the Canadian people as a whole . . . There is no substitute for it,” said Sager.

The long-form census is used by policy-makers to evaluate the demographics of an area in order to create effective policy. The census is useful when determining the need for hospitals, schools, businesses, public transit, housing, and everything in between.

Sager disputes the Conservative Party’s claim that the census is an invasion of privacy, pointing out that census forms are only ever read by computers and by data entry operators, who read the forms as quickly as possible, absorbing none of the information on the page. 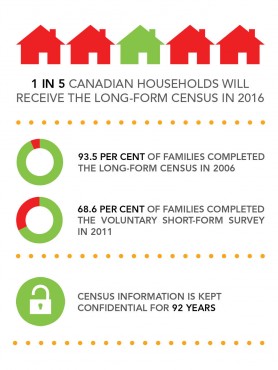 In order to avoid the supposed intrusion of privacy, Harper introduced a voluntary national household survey. In 2011, 30 per cent of Canadian households received a questionnaire exactly like the long-form census. Only 68.6 per cent of recipients completed the form. With such a large gap in the data, areas like Northern Saskatchewan are almost complete statistical blanks, where 40 per cent of the province had no viable results. Due to its higher cost and lower yield of data, the national household survey was generally regarded to be a disaster.

“The problem with 2011 is that we suddenly have an interruption in [Canadian census] data,” said Sager. “You can’t compare 2011 with 2006, and they won’t be able to compare 2011 with the results of 2016 census. So the tracking of all these essential indicators over time is just missing from 2011.”

To maintain a proper, random sample, one in five Canadian households will receive the long-form census in May 2016. The rest of the population will receive an eight-question short-form census.

Once collected and calculated, this data is released in tabular form. Anyone may access the aggregated version of the data, but personal census forms are not released until 92 years after the census is completed, and only if the person filling out the form gives their consent in the final census question.

“We hope and pray that most Canadians — all Canadians — will say yes to that question. Because if they say no, their information is never going to be available to their descendants,” said Sager.