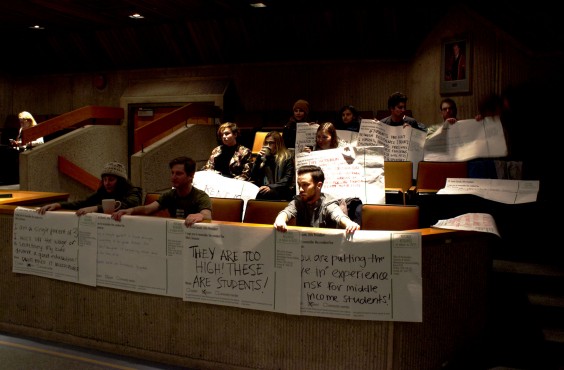 Students and UVSS directors protested against residence fee increases at the Board of Governors meeting on Nov. 24. Photo by Myles Sauer, Editor-in-chief

The rent is too damn high, and is only going to get higher, driving students and UVSS directors to stage a protest at the Board of Governors meeting last Tuesday, Nov. 24.

The protesters took spots in the Senate Chambers viewing gallery and held up banners with testimonials written by students condemning further increases.

The fee increases are part of a 10-year plan previously approved by the Board of Governors on Mar. 31, 2015. Residences fees were hiked 13 per cent last year, and are set to increase by a further six per cent in both the 2016-17 and 2017-18 academic years, for a total increase of 12 per cent. According to UVic administration, these fee increases are necessary to cover deferred residence maintenance costs, as well as the construction of a new 600-bed residence tower.

The meeting was called to order without incident, with BoG Chair Erich Mohr saying that the board is united by the support of the students, and that there’s “no one on this board that would wish to be seen to dissent from that.”

A motion was brought forward at a Finance Committee meeting the day previous to lower the residence fee increase for next year from six per cent to 2.9, which would bring it more in line with provincial tenancy law. (The current standard allowable rent increase for 2016 is 2.9 per cent, but the Residential Tenancy Act excludes university residences from those conditions.) That motion was amended to 2–4 per cent to allow some wiggle room, but it was unsuccessful.

UVSS Chairperson and student representative Brontё Renwick-Shields requested that the increases not go forward, because they’re double what is allowed by B.C. legislation.

She also hand-delivered a box of cards written by students opposing the increases to President Jamie Cassels.

Student representative Kayleigh Erickson said that while she “understands the complexity of the issue,” she could not support increasing fees. Erickson said she’s worked with numerous first-year students that can’t afford residence because of their financial situation, and that the high cost of living has a detrimental effect on residents’ mental health.

“I don’t think we know the solution,” she said, “but I don’t want the solution to be placing the burden on students.”

In response, Cassels stressed that “access and affordability are very important values and strategic goals” for UVic.

However, he also said that the increases were about striking a balance between affordability and being able to properly provide and maintain certain services. “I wish there was an easy and painless solution, but it’s about tradeoffs.”

“We could reallocate money [from other UVic services] . . . those tradeoffs are all there. We’ve explored every single one of them, but there isn’t a pot of money elsewhere that doesn’t come with painful decisions.”

Order-in-council appointee Isobel Mackenzie said that “to govern is to choose,” and that while she respects the board’s decision to move forward with the increases as originally planned, she said “it’s important to understand that we’ve made decisions to appropriate costs to certain groups of people.”

“We are choosing not to find that money somewhere else, and that’s a legitimate choice to make. But some of us believe we could’ve . . . [found] that money elsewhere.”

Residence fees will increase by six per cent in the next academic year as planned.

Correction: The residence fees are part of the university’s budget, so the Board of Governors votes in April on the fees as part of the budget framework. Budget planning will proceed with a proposed 6 per cent increase, but it is not until the April vote that any fee increase is determined.