Review: The Madwoman of Chaillot 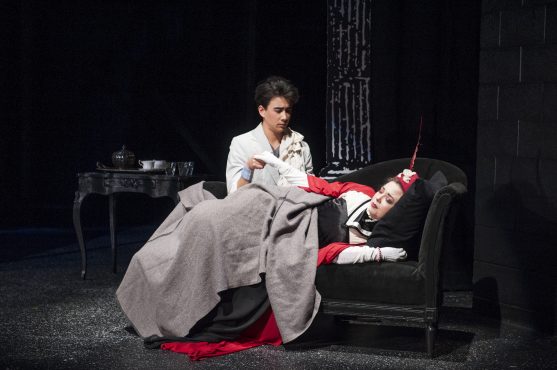 Photo provided by the Phoenix Theatre

The audience stares at the red curtain for several long minutes waiting for the lights to rise, the sound to fade, and the actors to appear. There’s a low muttering from the other patrons, a nervous laugh at the awkward limbo between announcement and performance. Finally, the curtains part to reveal Paris.

It’s the kind of Paris found in charcoal on the pages of an artist’s sketchbook, with the tall, romantic townhouses, the Eiffel Tower, and cobbled streets.

The Madwoman of Chaillot is written by Jean Giraudoux, adapted by Maurice Valency, and directed by Conrad Alexandrowicz. It is a dramatic satire of the Nazi invasion of Paris, loosely disguised as a story of greedy businessmen seeking their fortunes through oil deposits underneath the city. We follow the eccentric titular character, known as the Countess Aurelia, as she works to expel these prospectors from her home town and to reconcile her idealism with the evils of the world.

Staying true to the original themes of war, invasion, and plunder, the script unfortunately fails to engage the audience, even in the capable hands of director Alexandrowicz.

It’s unclear if the material needed a heavier hand or if the play was already stretched to its limits. But it feels safe to say that Alexandrowicz did the best he could with a script that was more focused on its themes than its characters.

There are few things more disappointing than seeing people you like and respect work on projects that are clearly not pushing their abilities or skills.

For The Madwoman of Chaillot, it’s apparent that the talented cast was limited by the script to one-note roles rather than given the opportunity to explore character and depth. Sarah Jean Valiquette as the Countess Aurelia, Nicholas Guerreiro (President), Chase Hiebert (Prospector), and Mary Van Den Bossche (Ragpicker) each found their ground within the  large ensemble cast, all working to bring as much character as possible to thin and undeveloped roles. 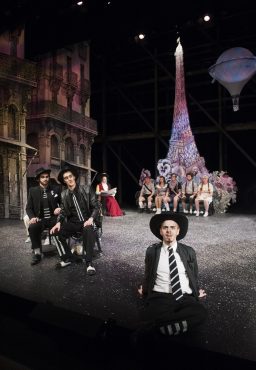 Even the supporting cast, including Rachel Myers, Taryn Yoneda, Lucy Sharples, and Nathan Patterson, tried to push away the restrictions, but their efforts were drowned out by endless thematic tangents and absurd monologues. The absurdity and irrelevance is shown through discussions of imaginary friends, a dead cat named Dicky, and an odd romantic subplot that relies heavily on the “love at first sight” trope. At the superficial level, the absurdity is amusing, but in the greater context of the play it is unrewarding.

However, the theatrical design to come out of the Phoenix Theatre is often the most innovative and engaging work I’ve seen. It continually pushes the boundaries of what I expect and what I think is achievable, and the work done by Patrick Du Wors on set, Michelle Ning Lo on costumes, and Matthew Wilkerson on lighting design exceeds all my expectations. Alongside Alexandrowicz, their unified vision of a colourful, cheerful Paris becoming infected by greed (represented by grey scale) is cohesive and complementary.

The Pleasantville aesthetic (established by Gary Ross’ 1998 film) of grey versus colour will never go out of fashion — colour is an easy and striking way to draw attention to themes, but it’s the creative application that raises the technique from commonplace to spectacular.

From the reflection of rainbow light on set to the splashes of colour on ash-coloured costumes, the wonderful visuals highlight the slow  plot and drab  script.

It’s obvious that the Phoenix has all the parts necessary to make good theatre — Madwoman is a good example of individually great work but a disappointing whole. The limited scope of script material is detrimental to the development of new talent, and we can only hope that the Phoenix decides to bring in more contemporary and engaging work in the future.

The Madwoman of Chaillot runs at the Phoenix Theatre from Nov. 9–25, with evening shows at 8 p.m. from Monday through Thursday and 2 p.m. matinees on Saturdays. Tickets are regularly $26, with $20 and $15 tickets for seniors and students respectively.