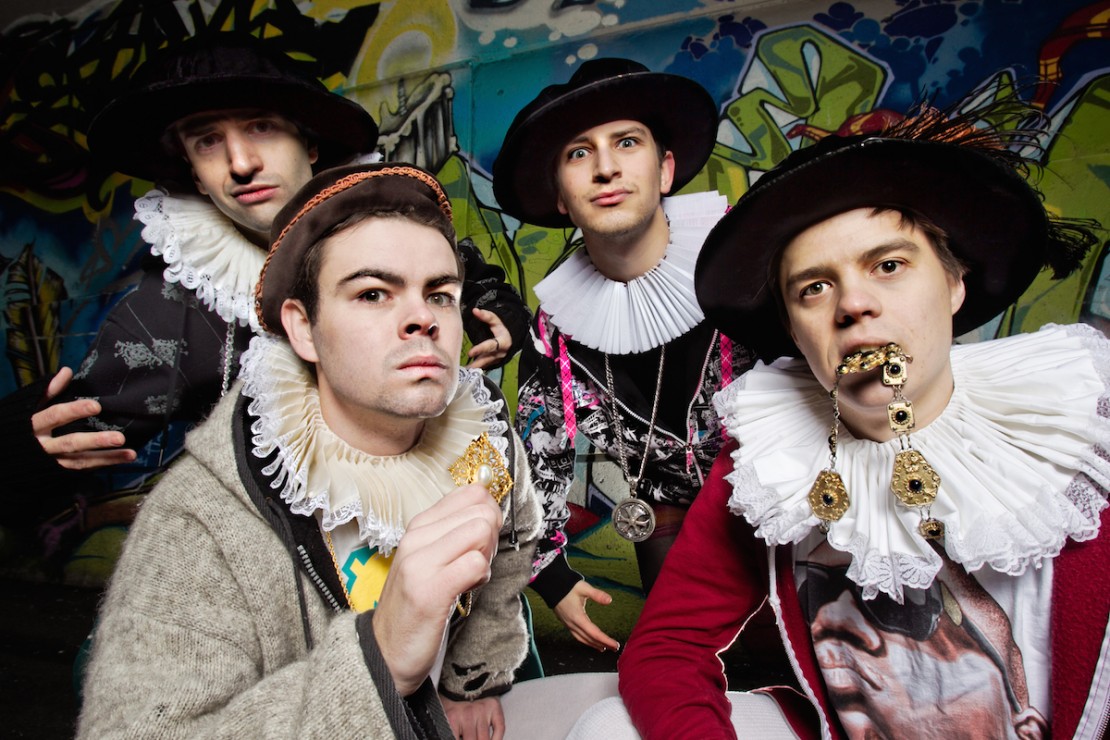 The Belfry has gone gangsta for its summer production of The Bomb-itty of Errors, which re-imagines Shakespeare’s Comedy of Errors with hip-hop bite, fusing novel rap beats with the bard’s original iambic pentameter. The bawdy, extroverted production, which was staged in Vancouver two years ago with the same dynamic quintet (Brian Cochrane, David Kaye, Niko Koupantsis, Jameson Matthew Parker, and DJ Oker Chen), takes the bard’s ribaldry to a new level and modernizes the wickedness of Elizabethan humour.

From the set and costume design to the original music, The Bomb-itty of Errors immediately makes clear its intentions to be over-the-top, base, and shock-them-until-they-crack funny. The use of neon, glow-in-the-dark colours, Marge Simpson-eque wigs, and crude jokes all work to accomplish this goal. The production provoked laughter by shocking and pushing the audience’s comfort zones, and the actors often interacted directly with patrons in the front rows.

As a firm introvert and non-participator, I felt grateful to be in a position where I could enjoy the audience interactions without the paralyzing fear of being called on myself. In fact, the meta-fictive elements of the play were by far the most compelling of the production. The rap segments often referenced Victoria landmarks, like the Butchart Gardens, and openly encouraged a post-show gathering at the Fernwood Inn.

Unfortunately, The Bomb-itty of Errors simply isn’t my humour of choice. Though exuberant, well acted, and successful in all of its intentions, the production lacked the finesse that I have come to expect from Shakespeare adaptations. For the most part, my laughter was prompted by shock, rather than the bard’s wittily cloaked savvy and I felt that the over-the-top humour undercut the ingenuity of the play’s plot, in which two sets of twins, who are separated at birth, find themselves in the same city.

Though no doubt sourced from the original play, I couldn’t help but be offended by the sexism, racism, and body discrimination from which The Bomb-itty of Errors derived much of its humour. I was disappointed to find that these offensive jokes were not redeemed by shrewd social commentary or insight into the human condition, as they are in many of Shakespeare’s comedies.

Despite these issues, The Bomb-itty of Errors is a very successful production. The skillful dropping of beats and the hilarious cross-dressing shenanigans prompted moments of innocent and intoxicating humour that are sure to make anyone laugh. I sincerely commend the acting, directing, and overall design of the production. If you are a hard-core South Park fan, or are just looking for some jaunty, ribald fun then this is definitely the production for you.

For more information, go to http://www.belfry.bc.ca/the-bombitty-of-errors/