Compared to his Victoria fanbase, Joey Bada$$ stands in stark relief. Raised in Brooklyn, amidst a street culture different from anything on Vancouver Island, he was shaped by fellow New York-area rappers like Nas, Biggie and Jay-Z. Joey probably had never heard of Victoria – let alone Rifflandia Festival – before. This incongruity between artist and audience was palpable during his set at Rifflandia on Sunday, Sept. 20. 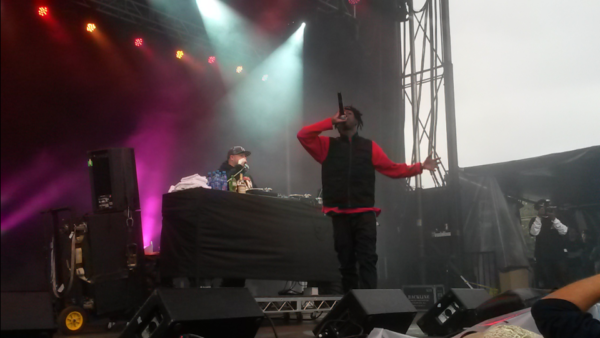 Joey Bada$$ (right) on stage at Rifflandia Festival. Bada$$ had some mic problems, but that didn’t stop him from unleashing some sick rhymes. Photo by Emmett Robinson Smith.

Joey seemed aware of this misalignment as he walked onstage, accompanied by Statik Selektah, who produced some of Joey’s new-ish debut LP, B4.Da.$$. When Joey opened with the album’s first track, “Save the Children,” his movement was limited as his eyes nervously darted around, assessing the audience. And who could blame him? Here were a bunch of predominantly white, middle-class teenagers treating his words as their own, as if they too had lived in Brooklyn’s streets. However, by the time Joey’s third song, “World Domination,” came on, and both he and the crowd were shouting, “Who the fuck passed you the mic / and said that you could flow?,” the disparities between the rapper and the crowd became almost irrelevant.

As the set progressed, Joey grew noticeably more appreciative of his audience, shouting things like “Victoria, what’s up?!” on multiple occasions. When “Paper Trail$,” one of the bigger singles from B4.Da.$$, came on, Joey shed his black vest, revealing a red sweater with the word “TANK” written in yellow in all caps, and the number 40 on the back. Although he was probably just overheating, it reflected a growing comfort with the audience.

Technical issues reared their head during the performance, however, as Joey’s mic was too quiet. He wasn’t inaudible, but for a rapper whose strongest asset is his lyricism, it was disappointing to be unable to clearly hear his remarkable arsenal of rhymes. Statik Selektah’s mic, which he used to echo Joey’s lines, was harsh by comparison.

Joey’s eloquence on the mic is both a benefit and a drawback. B4.Da.$$ is striking because of the torrential flow that Joey spews. But it’s hard to perform lines like “Listen, enter the chamber, get hyperbolic / They raisin’ Macs, I raise stakes to keep them brolic / My visions is macrocosmic, pass the chronic” and move around without fainting. Joey pushed himself to be physically dynamic when he spat, but the complexity of his rhymes was a hindrance to his onstage presence. It sucks being a good rapper.

Pro Era member Nyck Caution brought energy to the final portion of the set, going balls-out into a song called “Live for the Highs, Live through the Lows.” The duo, and the crowd, went HAM during an inexplicable recording of Kanye and Jay-Z’s “Niggas in Paris,” which served as a precursor to the show’s climactic final two songs. When Joey yelled “We need some ladies up here!” and launched into “Teach Me,” the stage became a female-dominated dancefloor. After grinding with one of the women brought onstage, Joey ended the show with “Survival Tactics.”

It was fitting to finish with the song that propelled him to stardom: part homage to deceased Pro Era second-in-command Capital STEEZ, part tribute to the ’90s gangster rap that shaped Joey, it was also a reminder that no matter how far he’s come, Joey Bada$$ is from the place where “everywhere you go just ain’t safe.” 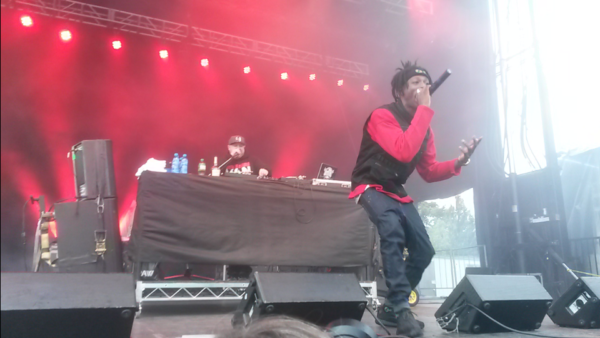