Gang Signs is a Vancouver-based indie-electronic music act comprised of Matea Sarenac, Adam Fink, and Peter Ricq. Their music, once described as “slacker dance,” is an affecting combination of pulsating bass, reverberating synth, breathy male and female vocals, and much more. Their new LP, Geist, is set for release on Oct. 2, and they’ll be playing at Copper Owl on Sept. 19 at 9:30 p.m. for Rifflandia Festival. Contributing writer Emmett Robinson Smith caught up with Ricq over the  phone for an interview ahead of their performance.

This interview has been edited for space and clarity. 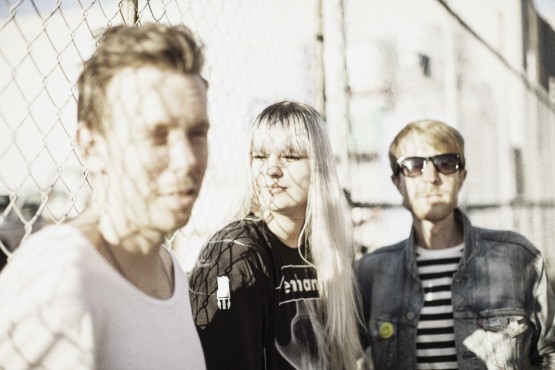 Emmett: Are you happy with Geist?

Ricq: Yeah. I think we got it mastered about a year ago so we’re just really eager to show people what we’ve been working on because it’s been a while. Matea [was] like, “why can’t we release it now? I just want people to hear it.” And we’ve just all been eager to take it to the next step, you know? We’ve been kinda holding back this whole time.

E: What were you trying to do with this LP, compared to your EP [self-titled, released in August 2012?]

R: The EP was recorded all in my house — just myself — and we actually got the chance to do it in a studio, but I’m not really an engineer, and for me, putting the drums on it just didn’t sound as clear as it could have been. And this time it was just to be able to put out a record that you can play in a club and it sounds good, and something that we’re all happy with. That was the approach — just make it more professional. Something that we’re really proud of is that when people hear it, they’re like, “oh, this isn’t just some garage indie band.”

E: So have you been playing a lot of new material at shows?

R: Yeah, we have. About two thirds of it is now new stuff. We still play some of our favourite ones from the old record, and there’s also two songs in the first record that we put on the new one, just because they’re songs that we liked and we were wondering, “how different would it sound if it was redone properly?”

E: How was playing with Fucked Up? They’re pretty crazy. [Note: Gang Signs played a one-off show with Fucked Up on Aug. 22 at Wise Hall in Vancouver.]

R: It was really fun. It was weird. I was wondering how that happened, because some hardcore bands were confused as to how that happened. Like, “Why don’t we get to open up for Fucked Up?” The guy doing the tour video, Jesse, introduced our band to Fucked Up. And he was a fan. And then Zach, who put on the show, he just knew us. And the fact that we got asked by those guys was like, “Ok, yeah, I think we should do it.” And I’m a fan of Fucked Up. And Adam – he’s [our] drummer – he was gonna go anyway. So yeah, it was a nice response. DOOMSQUAD, who toured with fucked up are a rad band. They also played on stage during Fucked up’s set.

E: Who else do you listen to?

E: Are these a lot of Vancouver bands that you’re naming? I know you guys have mentioned in the past how awesome Vancouver’s music scene is.

R: Yeah, for Vancouver bands . . . fuck . . . I know Adam is really into that. [A few] Vancouver bands that I like [are] Skinny Kids, Robbie’s band Sabota. [Robbie is the other half of Humans, another of Ricq’s acts.] Dralms… The Ballantynes are really awesome. [Adam] actually drums in so many bands in the city that he’s just always playing shows and meeting everybody in the scene. Such a charismatic guy. He loves everybody and everything, so it’s really easy to be in a band with a guy like that. And he’s always supporting all his friends, too.

E: With Gang Signs, what do you think you bring to the table within that scene?

R: I think Gang Signs is different from most other bands in the city. Usually, people who have interest in electronic music but aren’t necessarily doing it ask me for my thoughts on how to do it. I think this city needs more eclectic bands who do kind of what we do. Like, not necessarily being in a rock band, not necessarily being a house producer . . . I like the mix of things, and I think people, when they see us, they’re asking questions like, “Oh, how’d you guys do that?”

E: So, your new album: Why did you choose “SW” as your single?

R: Well no, actually the single before was “Mate.” It had a video .And the other one was “SW.” I didn’t even pick that. It was the publicist. They were like, “Yeah, we want to do this song.” And also, that song did have a video . . . And I’m directing five videos. I just finished the fifth one today. Like half an hour ago. Yeah, it’s fun. They’re all very different. The reason I chose “Mate” as the first one is I thought it complements the record really well. Some of the other songs, like “So Long,” I think it’s a great track, but very different from the rest of the record. I think “SW” also kinda sticks with “Mate.” So that is probably a good depiction of what you would get into if you listened to the record. I think it’s important for the first tracks to not make it too far off from what the rest is like. I don’t know if you’ve done that before — you buy a record and you like the first single, and then nothing is like it, and then you’re kinda pissed off.

E: Yeah, that happens all the time. It sucks.

R: I didn’t wanna do that to whoever would buy the record.

E: In “SW,” I’m wondering about the line, “I opened my eyes, we were a single number” — it’s at that point [that] the song starts to get a little more intense. I’m just wondering if you can elaborate on that.

R: I think it’s just about waking up somewhere, and you’re with that somebody who’s gonna help you through something, but you’re just alone. That’s all it is. Basically really simple. And then where they are in that story is that they’re in the sea. They’re on an island, so being alone on an island, like in that movie . . . what’s that movie? Tom Hanks . . . [Editor’s note: Castaway (2000), of course.] He makes his friend Wilson, because being alone is just not natural whatsoever. I think that’s what it is. It’s like being shipwrecked on an island. And it starts off, you’re with somebody, on a boat, and everything is just so much easier with them, and if they leave, being one person to survive is really hard. Whether it’s anywhere. Making music alone is kinda hard sometimes. Doing a lot of things alone is kinda boring. That’s why everyone wants to be in a relationship I guess. [Laughs]