Highlights and let-downs from the September music festival 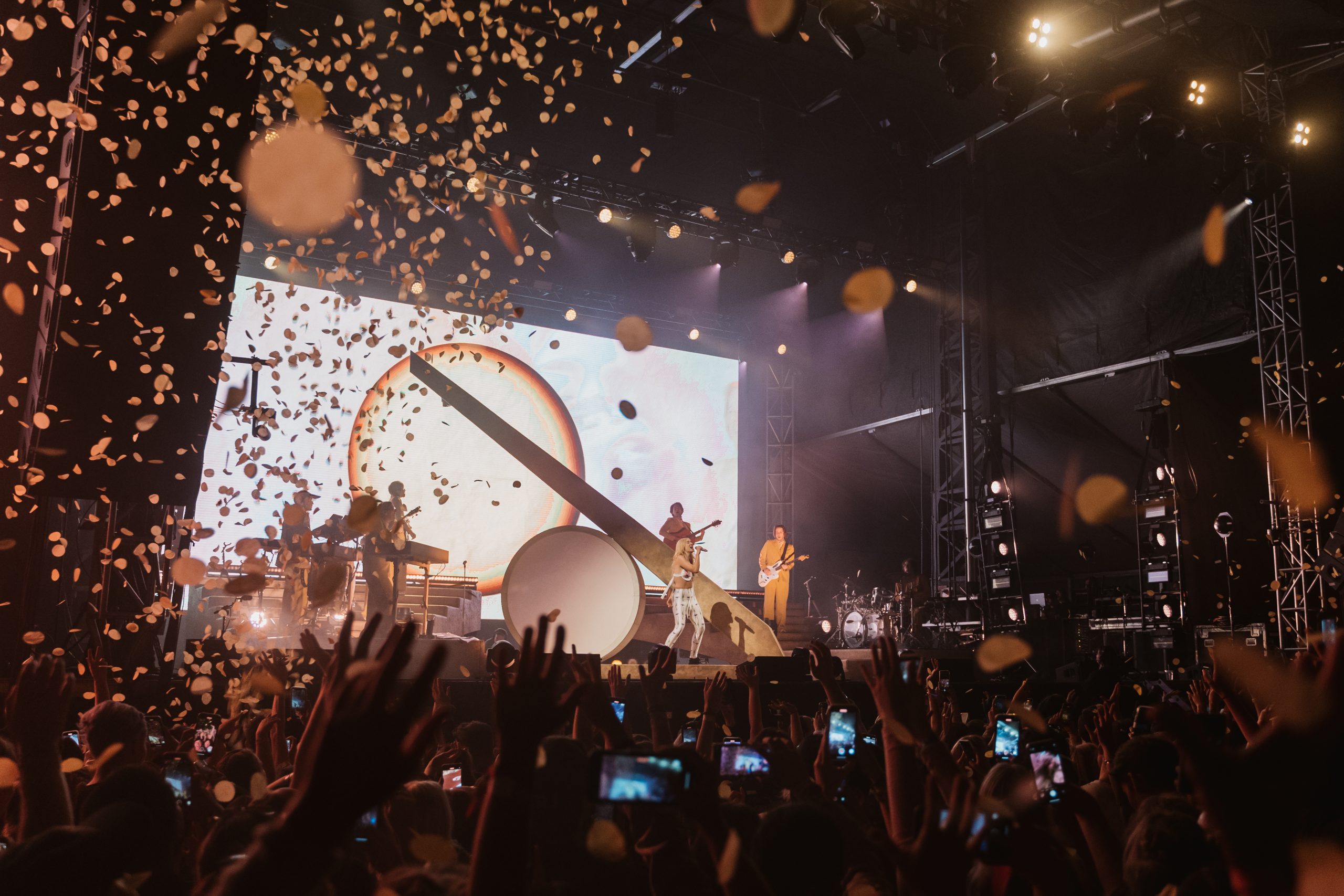 After a four year hiatus, Rifflandia returned to the City of Victoria, starting on Sept. 15 and closing out on Sept. 18. The festival began in 2008, its first ever lineup featuring Brother Ali, Current Swell, The Beatnuts, and Sweatshop Union, to name a few. Since its inaugural year, the festival has become an important part of Victoria’s musical presence and economy.

This year, armed with a media pass and a comically large Nalgene water bottle, I attended Rifflandia, seeking an impression of one of Victoria’s most anticipated musical events.

Day one of the festival started at only one of its two venues: Electric Avenue. Headlining the main stage was Dillon Francis, a Los Angeles electronic musician and producer. He shared the packed venue with west coast bass-funk artists Stickybuds and the Librarian.

Notably, Bridal Party – a local Victoria band – also performed, headlining the venue’s smaller, secondary stage. They are a must see live show if you get the chance.

With only one venue open and a relatively modest lineup, day one represented a successful ‘getting into gear’ for the days to come. 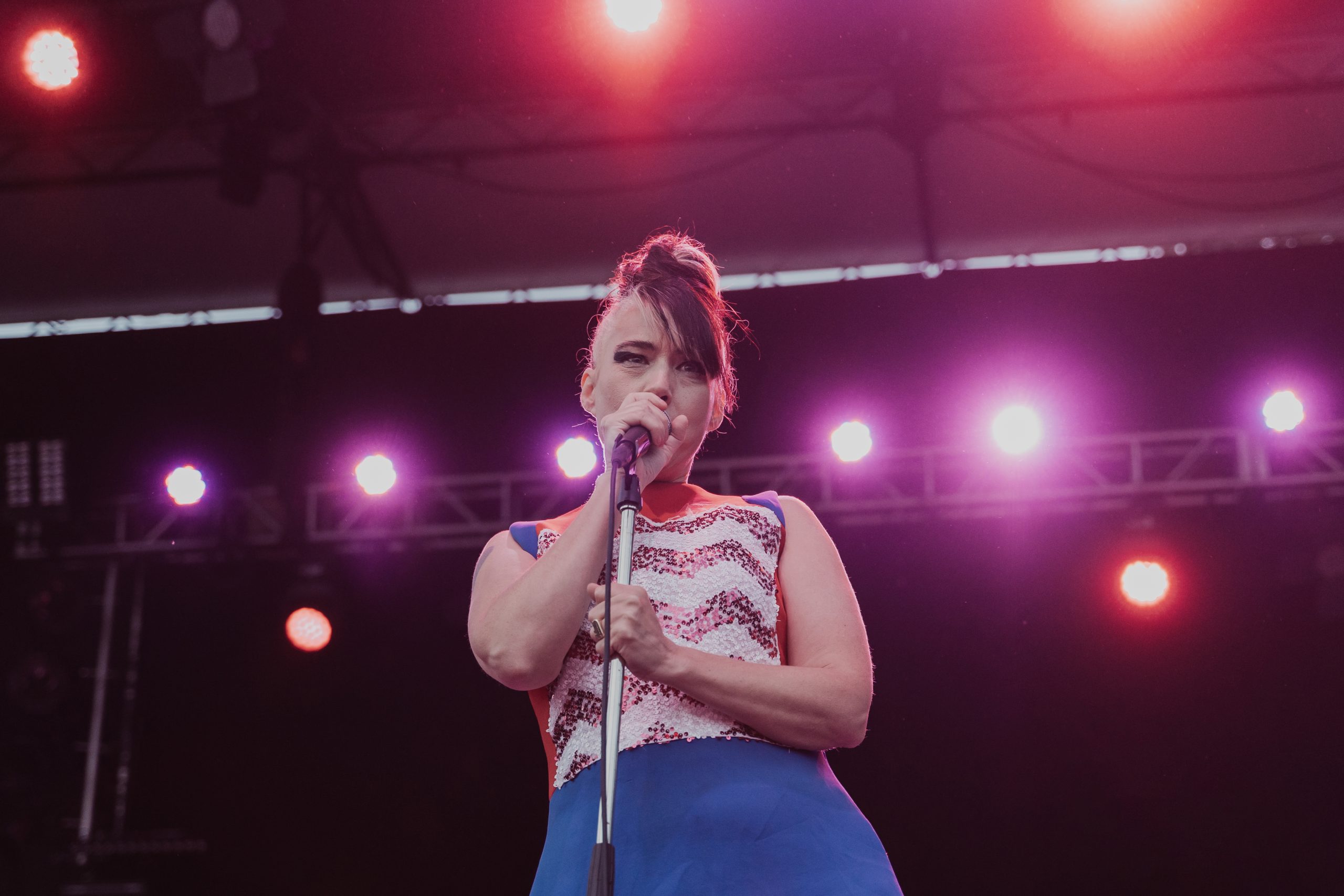 I spent the early evening hours of day two at the Park, Rifflandia’s colloquial term for its venue constructed at the Royal Athletic Park near downtown Victoria. As a punk fan, I was waiting in anticipation for the promised back-to-back performances from iconic groups Pussy Riot and Bikini Kill.

But, with little notice, Pussy Riot canceled their set.

The rug had clearly been swept out from underneath the feet of punk fans who bought their Rifflandia tickets with the sole purpose of seeing the two groups. An awkward gap between shows was filled with what appeared to be a somewhat improvised “Rifflandia Welcome” speech, which only killed part of the hour prior to Bikini Kill’s set.

Having reunited in 2019 after their 1997 disbandment, they met the crowd with energy and a clear zest for performance. As a band that played a catalyzing role in the empowerment of women in the punk scene, seeing Bikini Kill engage with their audience, complimenting fans’ outfits, and taking the time to mention their commitment to fighting for abortion rights in the United States, I felt like I was watching the real deal. Bikini Kill’s music aged with grace, and without selling out –– which is something to be said.

Frankly, I’d pretty much written off the rest of the night, still riding the stoke of Bikini Kill’s set. I was not prepared to have my mind absolutely blown by Ben Harper and the Innocent Criminals.

Armed with a kit drummer so deep in the pocket you would think he was digging for spare change, Ben Harper and the Innocent Criminals delivered a set imbued with musicality.

Leon Mobley, the band’s percussionist, engaged the crowd with dynamic and choreographed drum solos, while Harper’s vocals subtly highlighted the depth of his talent.

After Harper’s set, I mosied down to Electric Avenue.

I arrived in time to catch the second to last DJ set of the night: Whipped Cream.

Whipped Cream is a Nanaimo local and an energetic DJ. As someone who would never pursue a live DJ set on their own time, I was surprised by her. It was engaging and playful, and it felt good to see a Vancouver Island local on the stage.

My time enjoying the DJs at Electric Avenues was short-lived. The headliner of the night was DJ Diesel (Shaq) and, as you can imagine, it was a novelty piece more than anything.

All I really have to say about Shaq’s set is that no one seemed bothered when, twice in the span of five minutes, he enthusiastically told the crowd, “I love you, Vancouver!”

That about sums it up. 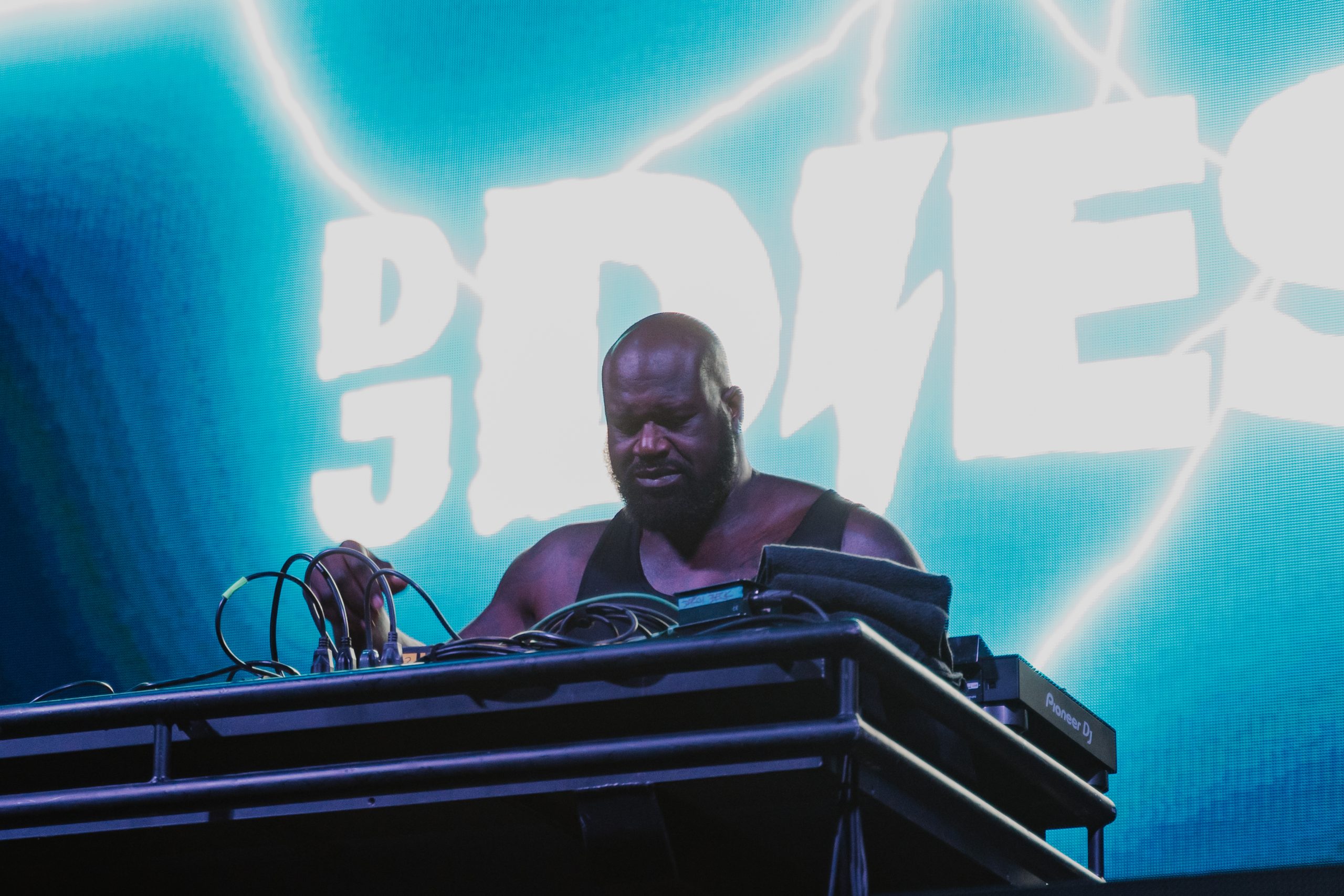 For me, day three started with Cypress Hill. Standing in the media pit next to the main stage’s bass speaker, my ears underwent a trial of biblical proportions. Delivering a super fun set, Cypress was loud, likable, and recognizable. I just wish I had brought earplugs and a spliff.

After that, I was looking to fill time before headliner Charlie XCX took the stage. I wandered across the park to the smaller Rifftop stage to see who was playing.

It turned out to be Fantastic Negrito –– an underdog replacement for the Black Pumas, who had pulled out of the festival citing tour burnout.

Fantastic Negrito was on stage, but it would be a disservice to say he and his band were simply playing. They were holding court.

Fantastic Negrito has described his live shows as “church without the religion.”

His rootsy blues music was rhythmically poignant and his vocals were emotionally gripping.

Charlie XCX’s set was cool if you like stadium pop. My favourite part was when she asked all the bad girls to scream, and you better believe I was screaming. 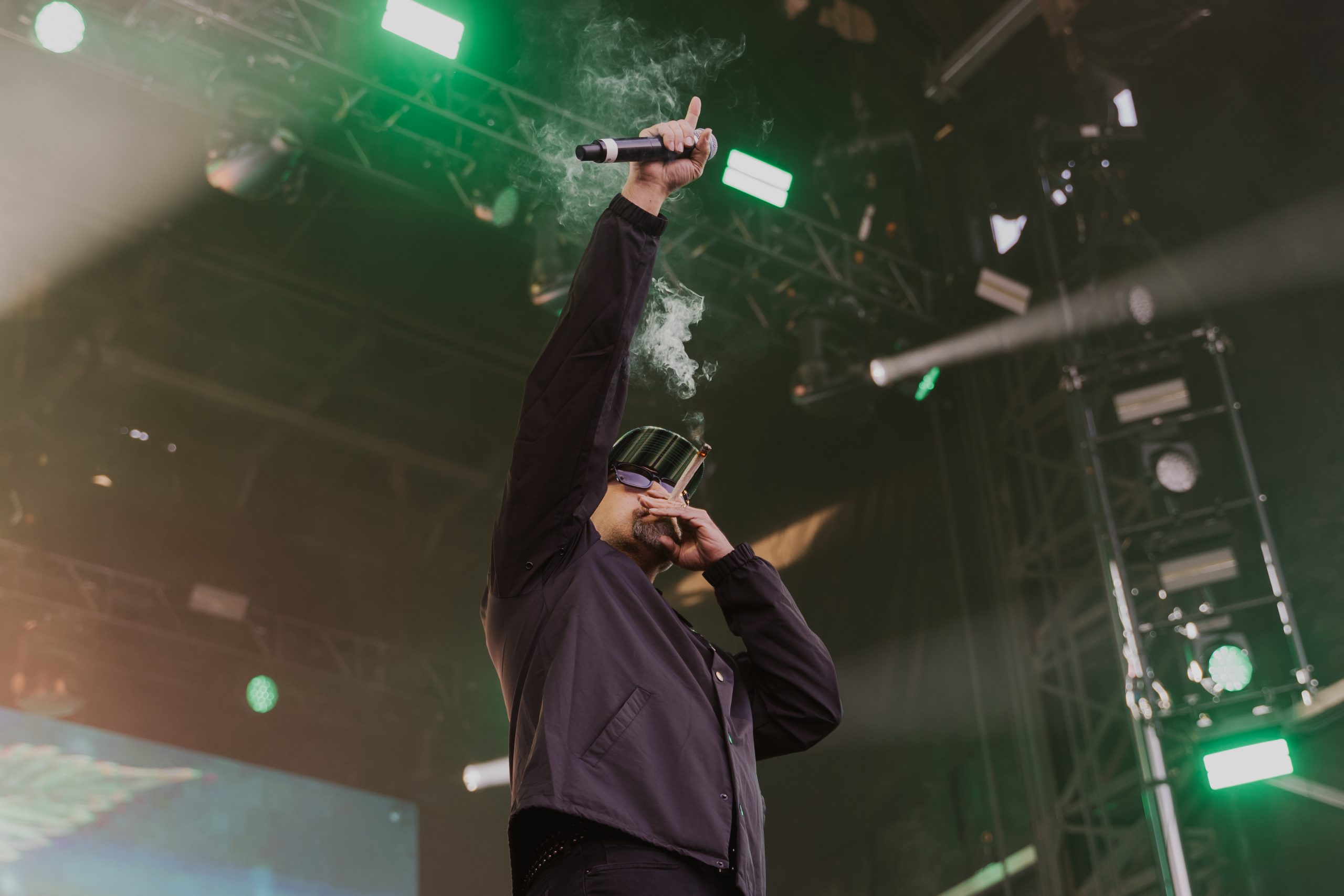 Day four, in terms of big names, was the real showpiece of Rifflandia. It began with a main stage performance from Zeta Psi alumnus Lauv –– a San Francisco born singer with a dreamy electro pop sound, influenced by jazz roots.

Maybe I was simply in a more receptive mood, but Lauv delivered a moody, appealing show, certainly a festival highlight.

After Lauv, BBNO$ played the smaller Rifftop stage. BBNO$ has been attributed as calling his music “ignorant but melodic” which holds as an apt description of his silly but lively performance.

Closing out day four, and the festival itself, was New Zealand pop aristocrat Lorde. She drew the largest crowd I saw all weekend and brought an elaborate stage setup. Accompanied by a six piece band/dancer group, her show was a performance event that spoke to her experience as a live performer. Like Charlie XCX, it was stadium pop no doubt, but she brought a bit more class and articulation than some of the other headlining acts. 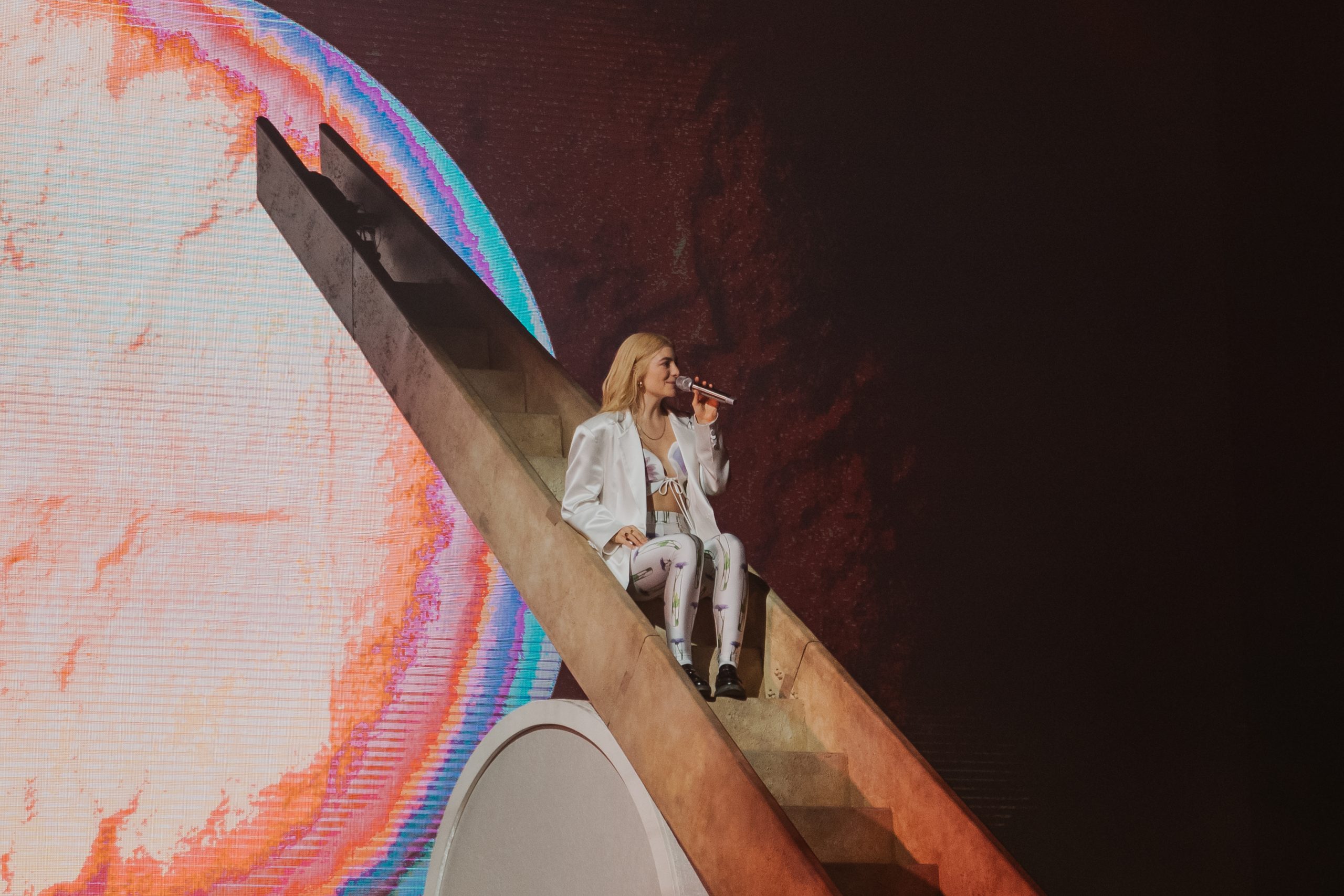 Rifflandia 2022 was exactly what it said it would be. It’s hard to review or describe a festival with over 50 musical guests. One’s individual Rifflandia experience is dictated by the viewing schedule they create themselves.

Overall, I thought that the sound quality and production was consistent. There were only a few times when I noticed mixing or monitor issues and even then it only affected a song or two. Likewise, lighting and stage dynamics never distracted from the artists, only complimented them.

The festival’s energy was confusing at times because of the myriad of genres and artists; the audience represented a fusion of musical cultures and subcultures. Millennial patrons wandered vendor stands and the beer garden like lotus-eaters. EDM and DJ fans jumped from set to set in colorful festival garb and punk attendees quietly mourned the revocation of Pussy Riot from the lineup.

One final note on the overall feel of the festival: Rifflandia seemingly had no concern for the environmental sustainability of their weekend event. Plastic utensils were used by most, if not all, vendors. Simple fixes to address this basic issue would go a long way in having the festival represent a step towards sustainability in music.

If asked to sum up my Rifflandia experience in one word I think I would say “satisfactory.” As someone who is typically not a fan of music at such a scale, which is so absorbed with a consumer narrative, I was surprised by some sets and really enjoyed others.

My advice to any future Rifflandia attendees is to allow yourself to be exposed to newer, smaller, more local artists. Be willing to be surprised.