Of course it was after a night clubbing, because that’s all he did. His girlfriend was with him — she was always with him, even though he never asked if she could move in —and they were yelling.

Now, this wouldn’t even count as eavesdropping because the insulation in the house was shit, but from what couldn’t be blocked out by the walls, I could gather that he (let’s call him Grunt) was yelling at her (let’s call her Wobbly) for inviting some drug-dealer that had a crush on Wobbly to a party. Good job, Wobbly.

But then the tables turned. Turns out Grunt tried fighting the drug dealer and then before you know it Wobbly was yelling at him. And I mean really yelling. She yelled at him to the point where he pleaded and pleaded, “Baby, I’m fucking sorry. Baby, I love you!”

I almost felt bad for him, but it was two in the goddamn morning. Clean up your acts, Grunt and Wobbly. 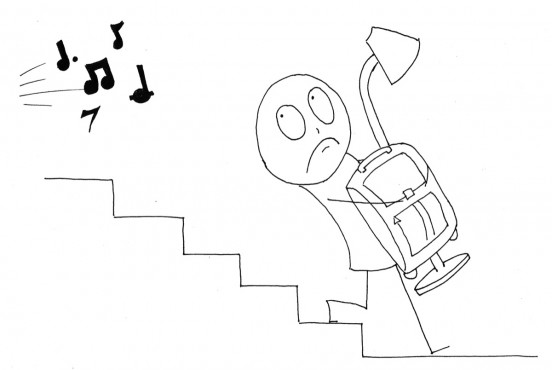 No Me Gusta Fiesta

Returning to my hometown one summer, determined not to live with my parents, I subletted a room that they had scoped out. I didn’t know what to expect except that it was “right downtown,” and my mother thought it had “bad feng shui.” The roommates were all from the same small town, knew all the same people, and had lived together for years. They each had boyfriends from the same town too, and even worked at the same bar — a Mexican-themed place that I loved.

By July, I mostly slept at my parents’ or friends’ places and barely saw my roommates. When I quit my job, I needed out by the end of the month, but put off telling them, making things even more awkward. I just started sneaking possessions out slowly. Before I knew it, it was the last day of the month and I still hadn’t said anything. I carried a huge lamp and my last suitcase down the stairs and I could hear someone in the shower. I thought, “Like hell if I’m going to wait around just to say, ‘Hey, by the way, I’m moving, like, right now…’” So, I just scribbled a note on some paper towel, left my keys on the counter, and never came back.

The rest of that summer I mostly spent avoiding the restaurant where they worked. The real tragedy: I’ll never feel safe around Mexican food again.

Have a story to share anonymously? Email opinions@martlet.ca  or use our Tumblr askbox.