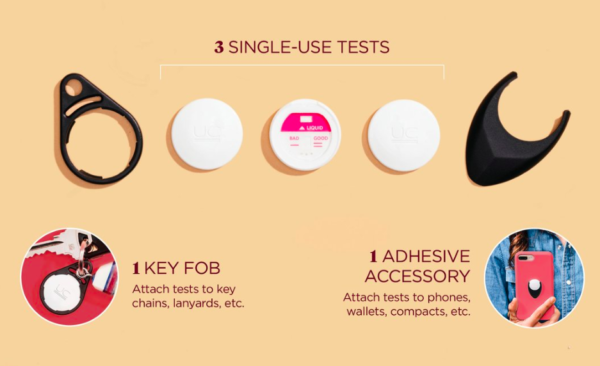 One U.S. startup company is looking to revolutionize drug tampering and campus safety systems for schools in Canada and the United States with the introduction of a new portable test for decreasing the risk of being drugged and sexually assaulted.

Undercover Colors, based in Raleigh, North Carolina, offers people the option to use a handheld tablet to detect if their drink has been spiked.

“Undercover Colors is a double impact mission-driven business that protects both women and men from being taken advantage of via a spiked beverage known as DFSA (drug facilitated date rape),” CEO Barbara Cook said in May to Family Office Insights.

An individual looking to test if their beverage has been tampered with can receive results within 30 seconds — with only a single drop of the drink used for testing. If the drink has been spiked, the test will show a single purple line indicating the drink is harmful. The tablet will respond with two lines if the drink is safe to consume.

This scientific breakthrough comes after news about a rape culture spreading across universities nationwide.

“It has a science that is unique … that identifies a series of drugs in a wide range of drinks in under a minute,” said Cook.

The team is led by scientist Dr. Nick Letourneau, whose previous work experience include the likes of pharmaceutical giants Pfizer and Zoetis.

The tablet’s technology relies on the concept of lateral flow; a technique that can test anything from placenta hormones in pregnancy tests to date-rape drugs in drinks.

In drink testing, droplets on a piece of paper will unlock a code of colours on the sheet. If there is any trace of a rape drug, such as Flunitrazepam (Roofies”), chemicals will prevent the pink dye from spreading across the paper. That’s how a single line lets the consumer know it has been tampered with.

The test can also detect the drugs Alprazolam (Xanax), Diazepam (Valium), and Temazepam (Restoril), and can be placed in over 100 different liquids, including craft beers, vodka, and margaritas.

Hot beverages, such as coffee or tea, are the only kind of liquid the Undercover Colors test cannot work in, because of high temperatures.

“We’ve made a product that is easy to use and works for everybody in simple accessories — it can either adhere to the back of a phone or be used as a key fob,” said Cook. “To date, we haven’t had any scientific fails and we’re still continuing to test if more broadly for extra measure.”

Although Undercover Colors does not address the greater issue at hand — rape culture — it does address some more immediate risks.

At the time, the idea was hugely popular, with Mark Cuban, Dallas Mavericks owner and Shark Tank investor, calling the idea “brilliant.”

Four years later with over $8 million in investor funding in hand, the company decided to ditch the nail polish plan for their current tablet method.

This scientific breakthrough comes after news about a rape culture spreading across universities nationwide.

University of Ottawa hockey players were charged with sexual assault during a trip to Thunder Bay in 2014, while disturbing rape chants were heard at both Saint Mary’s University in Halifax and at Vancouver’s UBC campus in 2013 during frosh week.

Around the same time that these events occurred, the B.C., Ontario, and Manitoba provincial governments passed separate mandates in 2017 requiring all post-secondary institutions in their respective provinces to create their own sexual violence policy.

UVic created their own policy in May of 2017 in the wake of the province’s legislation, which defines terms related to sexual violence, expectations for those who engage with the policy, and the policy’s jurisdiction.

Although Undercover Colors does not address the greater issue at hand — rape culture — it does address some more immediate risks.

Undercover Colors’ drink spiking tests are available on their website at www.undercovercolors.com