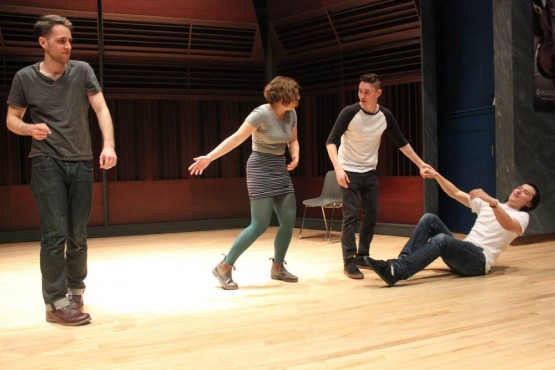 For some, standing in front a big crowd and performing is a nightmare scenario. To add to that nightmare, there is no script and nothing is planned; all you have to rely on is your quick thinking and the wit of your fellow performers. Welcome to the world of improvised comedy. To learn what sort of people are drawn to this nerve-wracking hobby, I recently sat down with Dylan Floyde, Brett Hurley, and Daniel Belkin, who are just a few performers of the local Vikes Improv group.

Through frequent workshops and practices, the Vikes Improv group develop the ability to be funny in the moment.

“We try and find interesting characters and follow those characters, instead of trying to make up premises and follow jokes. The jokes and the funniness fits into finding an interesting character,” says Belkin. Most of the time the storylines are light and humorous, but sometimes they take a darker journey into the territory of black humour. During one show, they found themselves talking about puppy farms and the making of puppy soup.

“Just to be clear, we do not condone the eating of puppies,” said Hurley.

“I would never eat a puppy,” clarified Floyde.

The Vikes Improv group had humble origins. “I started a little group called Res-Prov. We did two shows that year in residence,” said Belkin. However, they quickly gained momentum. “Each week we had more and more people coming out. “

“Now, the last show we did, we moved to David Lam [Auditorium]. We had one hundred and fifty people show.”

As the group continues to expand, their ethos remains the same: “What we want out of it is something we had even when we were just four people in a basement, which was community.” Belkin said. “We wanted a community at UVic that comes together through improv.”

Floyde, who had recently moved from Winnipeg around the time the group began, attended one of their workshops, and recalls that “everybody there was so supportive and so welcoming . . . I think it really solidified me in university, and gave me a solid group of friends to fall back on.”

Over time they developed a system that catered to novices and experienced improvisers alike. Belkin comments that once people learn, it begins to resemble a sports team.

“When you’re on the team and you’re playing, you’re just kind of feeding off each other . . . We call it the group mind, and the group mind is just thinking as one.” The group did not have to look far for inspiration when it came to establishing their system; they all took classes with local improv guru Dave Morris, who had turned his hobby into a full time business. “He’s got his own studio downtown called Paper Street Studio,” says Belkin. “We’ve all been students of his style of improv.”

Floyde admits that when he first joined he was “just awful.”

“I think everybody has a little bit of funny in them,” he says. “You’ve just got to learn by doing.”

Hurley continues, “There’s people that are just not funny in real life, but then they get on stage and they become more comfortable and it’s just like wow, this person’s hilarious.”

When asked which stars of comedy they would like to perform with on stage, they mentioned Key and Peele, Mike Birbiglia, and Amy Poehler. Belkin had one surprising addition: Stephen Harper. “People take him as a serious guy and stuff. I think behind all that evil, there’s probably a lot of funny.”

Vikes Improv encourages everyone to come out for a performance or a workshop. “You can expect to laugh” says Hurley. “Maybe cry.”

Belkin concludes, “It’s a good Friday night starter because it’s right in that time when you come down, before you go out, 7:30 to 8:30 p.m. If you’re looking for something to get you going, this is the perfect appetizer.”

Vikes Improv will perform on Oct. 23 at 7:30-8:30 p.m. in the David Lam Auditorium. Their performance schedule and more information can be found at facebook.com/VikesImprov or vikesimprov.com.