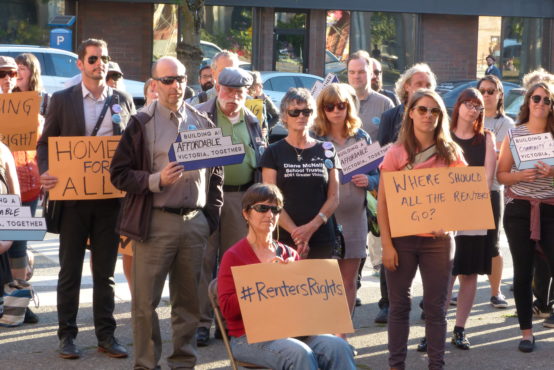 A small crowd of supporters rallied outside Victoria City Hall just before a key council meeting on Sept. 6 to show support for changes to Victoria’s building laws that would make affordable housing units mandatory for all future developments.

The rally was hosted by city council candidates Sarah Potts and Laurel Collins, renters who are both a part of the “Together Victoria” slate for the upcoming municipal election on Oct. 20.

“Today, council is actually making a decision on two important policies: inclusionary zoning and community amenities contributions. So we wanted to mobilize people,” said Collins, who teaches Social Justice Studies at the University of Victoria. “We were getting together with housing advocates; we’ve been having a number of meetings with people about how we actually create municipal policies that will ensure affordable housing.”

The purpose of the rally was to encourage city council to improve requirements for community amenity contributions—in kind cash contributions from property developers when granted development rights—and for 15 per cent of units within any given future development to be ‘affordable housing’ as it is legally defined. 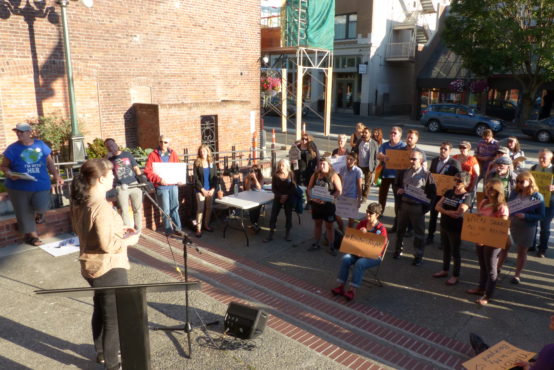 “Right now, the way the policy is worded, it means it will only apply to a few projects, which won’t actually create the affordable housing that we need,” said Collins, adding that other municipalities such as Saanich and Langford currently have higher community amenity contribution requirements than Victoria, as well as “more robust” inclusionary zoning policies for affordable housing.

In the end, Victoria City council that day did make amendments to the bylaw for new construction and how affordable projects are required to be, but not to the extent advocated for by Potts and Collins, nor to the satisfaction of city councillor Jeremy Loveday who also joined the crowd at one point to show his support.

“I’ve been pushing for inclusionary zoning for the last four years, and it’s been frustrating how long it’s taken to get to today,” said Loveday. “I’m happy that we took the step today that we did in terms of implementing a policy, but it doesn’t go as far as I would like to see.”

There were two amendments that did pass, however: now, any project of more than nine units will need to include affordable units (where before the threshold was 40 units), and a deadline of March 31, 2019 was implemented for when this new law will take effect. 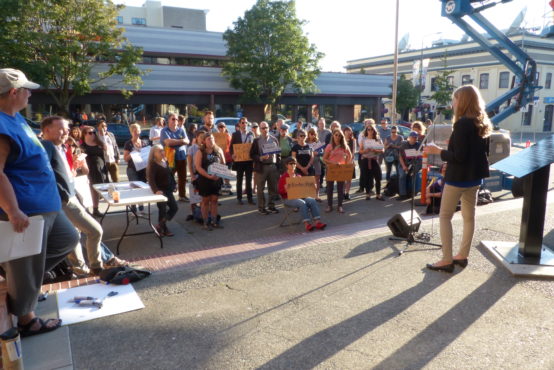 Laurel Collins speaks to the group about Victoria housing outside of city hall.

The definition of “affordable” for this policy will be 80 per cent of the average rent for the given neighbourhood, as per the Canadian Mortgage and Housing Corporation.

Under Mayor Lisa Helps, the current city council has advanced several housing initiatives including the formation of an Affordable Housing task force, permission to build and rent out detached garden suites, and the implementation of the “Regional Housing First program” which secured $90 million from a combination of the CRD, the B.C. Housing organization, and the federal government. Helps says that this latter initiative will come to fruition over the next five years and will include 2 000 units of purpose-built rentals with 51 per cent priced below-market value, and 20 per cent at a shelter rate of $375 per month.

“I think it’s really important for us to let people know—let the community know—what, where, and how the city does impact housing and what we can do as a community to address the affordability crisis,” said Potts at the rally, who currently works for Our Place Society.