Sex and the (Univer)City | Great sexpectations and the UVic student

Do you miss Sex and the City, but wish it had been more diverse and woke? You’ve come to the right column, kid. 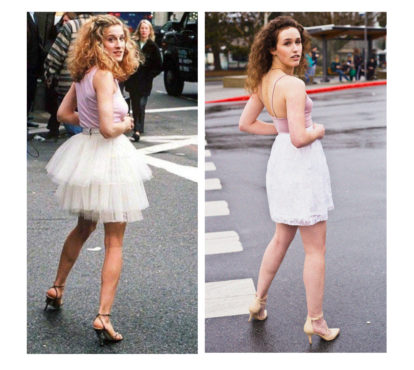 Carrie Bradshaw may have claimed New York as her turf, but did you know we have our very own sex columnist right here at UVic?

There are some who’ll tell you that your twenties are the best years of your life. You’re bright-eyed and bushy-tailed, and you’ve got your whole life ahead of you. Plus, you’re hot and single, and if you choose to be sexually active, then this is apparently your prime.

No one spends 99 per cent of their time singing in an acapella group, we can’t all be neighbours with Seth Rogen or fight for our fraternity while looking like Zac Efron, and no one is having choreographed movie-sex — unless you are, in which case, good for you! Instead, we have 81 things to do before breakfast, UVic has no Greek life, and required readings are what take up 99 per cent of our time.

With all this going on, it’s not surprising that most people feel like they’re failing in some aspect of their life. So why does this extend into the bedroom, a place that is supposed to be for you and whomever you choose to partake in the fun with? How, in 2019, did the deed (and all things associated) become something we feel the need to perfect?

The perfect, movie-style sex that we’re so often exposed to can make us feel like there are certain expectations about the ‘how’, the ‘when’, the ‘how often’, and the ‘with whom’.

The media creates an image of perfect sex and perfect relationships. This likely isn’t news to you, but we often gloss over the effects that this image can have on our individual lives.

After winter break, I caught up with the best sources a sex columnist could have — my friends. We talked about the great sexpectations that we feel as young people in 2019. I found myself wondering, why are we letting something so personal be influenced by public opinion?

In the era of sex positivity, why are there so many people out there feeling alone in their experiences? Why is there so much pressure to have these stereotypical (and often heteronormative) sexual experiences?

I met Luna* on the bus last year after a night of dancing at Upstairs. She’s a Computer Science major and just turned 20. After a lovely (and religious) Christmas break at her parents’ house, she decided she wanted to lose her virginity. She was ready, she was in love, and “everyone else had already done it.”

Luna and her love made a night of it, candles and all. But unfortunately, when it came time for the main event, they ran into some trouble when it came to penetration. Luna was upset because she had finally felt like she was ready. We talked about the things she could try next time. But she said she’d done the obvious and no amount of warming up had helped that night.

After an internet search, Luna decided to see a doctor about a potential case of Vaginismus.

With Vaginismus, the muscles of a person’s vagina involuntarily contract, despite the fact that they may want to have sex. According to Rosemary Basson, a clinical professor at the UBC Department of Psychiatry and Director of the UBC Sexual Medicine Program, Vaginismus can “[make] sexual intercourse or any sexual activity that involves penetration painful or impossible.”

Vaginismus often presents itself when a person with a vagina has sexual intercourse for the first time, says Basson. However, it can also develop later on in life. Fear and anxiety can stem from past experiences, a painful first time, or from sources unknown. But the emotion of fear causes the muscles to contract and this makes the pain worse.

Sage* — an undeclared major who Luna and I met back in a first-year Anthropology class — mentioned that they had a similar experience. They hadn’t talked with anyone aside from their doctor, who had belittled the situation. Sage was surprised that anyone else had dealt with this. In hearing Luna’s tale, they began to think that maybe their struggle with identity and the fact that their significant other had had more experience may have made them uncomfortable at the time.

After talking with Luna and Sage, I couldn’t help but wonder, in the era of sex positivity, why are there so many people out there feeling alone in their experiences? Why is there so much pressure to have these stereotypical (and often heteronormative) sexual experiences?

After a gentle pelvic exam and a careful discussion about her past sexual experiences, Luna’s doctor agreed that it could be Vaginismus. The doctor recommended that she look into some of the treatment options, as Vaginismus is a manageable condition.

Bailey*, a friend from high school and a proponent of sex therapy, is always available for a candid chat about sex — in all forms. Over the past year, the Sociology major had embraced his bisexuality and had also begun to explore open relationships with his boyfriend of three years. I’d known him for quite a while and I’d never seen him happier.

I began to realize that navigating sex, and all things associated, was kind of like navigating university. No matter how prepared we think we are, or how much we preach self-love, there will always be times where we feel like we’ve fallen short of our own high expectations.

As our resident sexpert, Bailey met us for a round of cosmopolitans (okay, so we had craft beers, sue us). After talking to Luna, Sage had decided to seek help again. They told us about their recent foray into sex therapy — which Bailey was thrilled about. Luna mentioned she’d made an appointment with a physiotherapist and had brought up Vaginismus with the counsellor she sees regularly too.

Suddenly, I began to realize that navigating sex, and all things associated, was kind of like navigating university. No matter how prepared we think we are, or how much we preach self-love, there will always be times where we feel like we’ve fallen short of our own high expectations. Sex and the City may have missed the mark when it comes to diversity (as #wokecharlotte reminds us), but the great Carrie Bradshaw’s openness about sex is encouraging. We need more sex positivity in the media and we need diverse experiences portrayed more often.

How can I, a sex-positive young woman in 2019, have never heard of Vaginismus until a distressed friend did a Google deep dive? Of course, as it would happen, the moment I learned what it was, it was featured in a storyline in Netflix’s new show that I was watching, Sex Education. (You can read my review about it here).

It seems to me like we’re heading in a good direction. The more open we are about the diversity of the sexual experience, the better it will be for those who come after us.

And as for me? I think if the details of Carrie and Mr. Big’s sex life can stay a mystery, then so can mine. I’ve gotta respect my own Mr. Big and he would not be impressed if I spilled that tea. You feel ripped off? Well, too bad, it’s my column!

*Names and details have been changed to respect the individuals’ privacy.