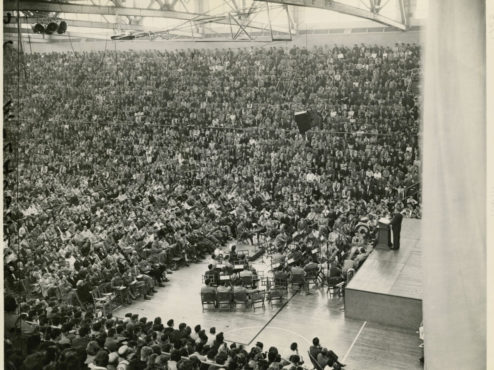 It’s rare to understand the historical significance of an event as it’s being lived, but that’s the opportunity that Dr. Rachel Cleves and the students in her Sex and Power in American History course have in front of them.

The course tackles some early events in human history — Cleves says she talks about the role of sex in the first European colonies — yet it is noteworthy because of what’s happening right at this very moment.

As the #MeToo movement continues to capture headlines and public attention, students are taking the course as a way to understand the historical moment they’re living in.

“I feel like the last time I taught it there were students who were taking it because they were concerned about what was going on, politically in the public sphere,” Cleves says, speaking in her office in early December 2017.

“I would guess that that would be heightened this time.”

History 306, or “Sex and Power in American History,” is a third-year history course that explores the intersection of sexuality and power hierarchies that have existed in the USA since the 1500s. A historian of sexuality, Cleves started teaching the course four years ago; first, she co-taught it with Sara Beam under the topic of “Sex and Violence.” But Cleves, a New Yorker, soon began teaching her own course with a distinct lens on American history.

“I think that the testimonies of women reflect changing sensibilities over time, about what are acceptable and unacceptable intersections of sex and power,” she says.

The class is open to students in all faculties with no other course requirements. As a result, it attracts a wide variety of students for a class that covers a wide variety of topics: commercial sexuality, body prostitution, body reform, LGBTQ+ history, urbanization, and popular culture.

“We read about the history of rape and slavery, or rape and colonization, and various themes that are difficult. Really difficult,” Cleves says.

In the United States and Canada, that’s a long, brutal, and recent history, and discussions often centre around noteworthy news stories like the Stanford Rape Case back in 2016. But, Cleves continues, there are the positives — positives like the #MeToo movement.

“We don’t only talk about sex and sexuality through the lens of victimization,” Cleves says. “We’re also talking about social movements and expressivity and sexual expression, sexual pleasure. Other topics that can be fun and funny. So I think it’s a mix.”

#MeToo is one such example of a social movement — a trend, started partially by Hollywood actresses, of sexualized violence survivors publicly naming their abusers and inspiring others to do the same.

Cleves expects the movement to be at the forefront of the conversation from the beginning of the semester. #MeToo is a noteworthy campaign — both in terms of its scope and its response — and Cleves considers its resonance to be a sign of the changing times.

“I think that the testimonies of women reflect changing sensibilities over time, about what are acceptable and unacceptable intersections of sex and power,” she says.

The change is evident even in the age gap between Cleves and her students.

“Being a generation older than the students, I grew up with a certain set of expectations—not how I liked the world, but what the world was like,” Cleves says. “That sexual harassment was commonplace, that there wasn’t much you can do about it, that it was to be expected. And now we’re in this moment of transition where I think a lot of younger women are saying this is unacceptable and it doesn’t have to be this way.”

It’s a new state of affairs, and the students in Cleves’s class will begin to understand just how momentous the campaign could be — how the #MeToo movement has begun to dismantle institutions of power that have been erected in our society since the early days of colonization.

“It demonstrates how not only do sex and sexuality shape power hierarchies,” Cleves says, “but that can change.”