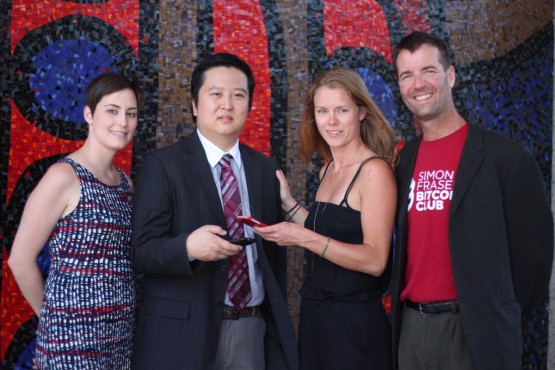 From left: Lauren Shandley, Mike Yeung, Laurie Macpherson and Scott Nelson. Yeung and Nelson have made the first Bitcoin virtual currency donation to Simon Fraser University. The money will be used by Shandley and Macpherson for a humanitarian co-op project in India this fall. –Provided(photo)

The donation marks the first acceptance of Bitcoin at a Canadian post-secondary institution, as well as the first step for the Simon Fraser Bitcoin club towards getting the crypto-currency accepted at SFU.

Yeung told the Peak, “We thought that making a pledge to SFU in Bitcoin and to use it to do good, especially on an international basis, would be a really good way to get SFU to be more accepting of Bitcoin and would also fit in with SFU’s engaging the world mission.”

The $6  000 will be used by SFU students Laurie Macpherson and Lauren Shandley for their humanitarian co-op project in Kolkata, India. The two will spend the fall term working for Destiny Reflection, a social enterprise that helps provide livelihood opportunities for vulnerable and rescued women who have been victimized by human trafficking.

“Bitcoin is an avant garde platform enabling us to directly impact a wider community with our humanitarian efforts,” said Macpherson in an SFU press release.

In line with SFU’s mission of “engaging the world,” Mark McLaughlin, SFU’s executive director of Ancillary Services, feels that Bitcoin is particularly important in enabling transactions in less-developed countries, especially for people who don’t have access to currencies or bank accounts. “People in the developing world don’t have access to bank accounts like we do, so now Bitcoin is enabling them to do [more] commercial transactions,” he said.

Concerning what this project means to the Bitcoin club, Yeung believes the initiative shows that Bitcoin is “actually something that’s tangible, that can be used towards a good cause.” He also hopes that this will provide Macpherson and Shandley with another talking point, as both have been given one Bitcoin — worth approximately $550 each — to spend during their trip.

McLaughlin confirmed earlier this month that the university is considering the instalment of Bitcoin ATMs in its bookstores, as well as acceptance of Bitcoin in its dining services.

“It’s an ongoing process where we’re looking to install some ATMs on campuses, as well as to get the bookstore to accept Bitcoin and to reward users of Bitcoin with perks,” explained Yeung.

The university has also added a Bitcoin donation option to its “Ways to Give” website page.

“We can’t be afraid of change. We have to look at these new technologies and learn,” said McLaughlin.

While McLaughlin and Yeung admitted that “all of this is still in beta-testing mode,” Yeung expects some of these features to be seen on campus in the fall.