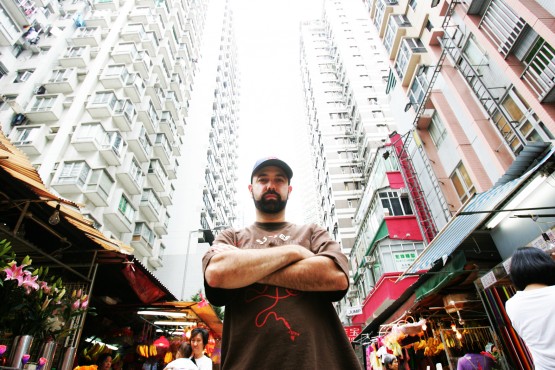 Before my first trip to Shambhala last year, I was leery. Not of the EDM mecca itself — legendary in music-loving circles all over B.C. and beyond — but of the music. I was repeatedly assured that the roots of electronic music lay in the genre closest to my heart, hip-hop, yet I still failed to the connection.  I mean, I understood the connection, but I didn’t feel it. When I think back to the Shambhala experience, those artists and sets that championed hip-hop’s place in the EDM pantheon were the most memorable. It’s nice to know that even a world-class DJ like Nu-Mark (he of the mighty Jurassic 5) had the same fish-out-of-water type moments as I did.

“The first time I played Shambhala, I thought I was at the wrong festival. I saw the line up and was a bit freaked out because they were all playing dubstep . . . Hey?! remember that — dubstep?” recounted Nu-Mark in an email. “Anyway, I keep coming back because it seems as if I’m the only one not playing electronic music.”

None of this is to discount electronic music or its cultural importance. Quite the opposite. Nu-Mark, or Uncle Nu as he is affectionately known, is a student of music, no matter where it comes from. His tracks, albums, and sets are consistently fresh nods to the past, to the roots of the tunes we love today. As we progress further into the Age of No Boundaries, where musical genres fornicate endlessly, historians like Nu-Mark are of the utmost importance.

Nu-Mark is no hip-hop iconoclast, though. He pays attention to the entire world of music, creating a live experience that will undoubtedly stand out from what his counterparts are dropping at the Farm in Salmo, B.C.

“I enjoy playing a variety of genres from soul to funk to reggae to hip hop and oldies. They give me room to express myself and I rarely get the hippie chick yelling, ‘Hey can you play some Persian anthem trance?’ I bounce from genre to genre because I listen to almost everything.  I enjoy slowly moving the crowd between different musical styles so they know that there’s more out there both new and old.  I would have loved to bring my toy set out there but there’s never enough room on stage at Shambhala.”

With the rise of computer-driven DJ-ing, vinyl-flippers like Nu-Mark are increasingly important links to the roots of the movement — an artisan DJ, if you will.

“You know there’s a problem when lead singers from rock bands, rappers, and Elijah Wood are becoming DJs. Computers have probably given all [DJs] a bad name and what I mean by that is everyone has become a DJ because of the easy access to the art. There’s something to be said about staying in your own lane,” says Nu-Mark of the increasingly crowded DJ world. “Saturation is really what I’m speaking about here. I’m truly the last person you’ll hear complain about my craft. I treasure being a DJ and there’s a lot of DJs that have been doing this for a long time that deserve proper credit for their grind!”

Follow all things Nu-Mark at www.unclenu.com and check his SoundCloud page at https://soundcloud.com/unclenu