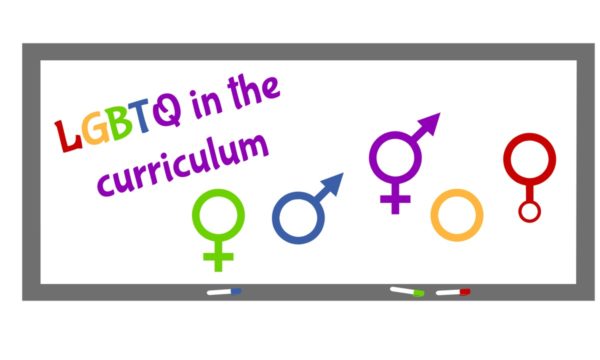 The red floral pattern of her dress mimicked the spring weather as I gingerly opened the door to Georgina Hope’s Family and Gender Studies class at Victoria High School. Her smile was as warm as the sun that shone through the windows, and the classroom was buzzing with energy; purple sheets of paper asking “Why do we still need International Women’s Day?” littered the desks.

“We’re going outside today,” said Hope. “It’s the day before spring break. Why not?”

As the students ran around the community surrounding Vic High, Hope explained how this course came into being, and her desire to create a Gender Studies curriculum for B.C. high school students.

“During my time as a teacher, I’ve felt the need for a Gender Studies class . . . There are no Gender Studies courses in B.C. for high school students . . . I want to create a curriculum for it, there is a real need for it, but, because there’s no curriculum, I’ve had to teach it under the tag of Family Studies,” explained Hope.

Hope chuckled as she told me her concentration is in art and post-colonial English. She explained that she’s not formally trained in Gender Studies, but she has a lot of experience through her work subbing in for Women’s Studies courses.

Purple flyers successfully taped to walls of local businesses and the community centre, the students returned, and as we made our way back to Vic High, the warm breeze refreshed us, making it impossible not to smile. 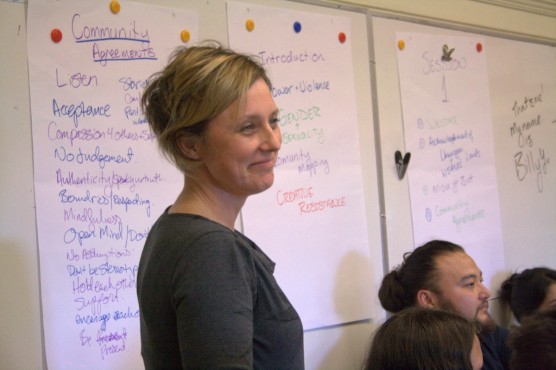 I think it would be great if sex ed became more open. I have a younger brother who has asked me many questions about gay couples and how someone would know [if they are gay]. Having that kind of topic taught at school would be really helpful to make that lifestyle normalized. If from a young age every type of lifestyle like LGBTQ was taught in class, the children would be more accepting of it when they’re older.

Fingers type and the abyss grows. Forums, tweets, and pornography circle the minds of youths in sexual minorities searching for answers. The misinformation festers, and the guilt grows, while thoughts of “how do I ask my teacher?” and “I’m too ashamed to ask my parents” plague their minds. Images of over-sexualized and misrepresented LGBTQ (lesbian, gay, bisexual, transgender, and questioning) relationships create a veil of shame, shielding youths in sexual minorities from the reality of healthy relationships.

Representing LGBTQ relationships and sexual health strategies is vital in sexual education curricula in British Columbia. Without proper sexual health education, students that belong to sexual minorities, whether identified or not, are at risk of unintentionally spreading or contracting STIs to or from their same-sex partners.

A further danger of an inadequate LGBTQ sexual education is a flawed view of healthy relationships for youths. If healthy relationships are only shown through a heterosexual lens, sexual minority couples/partners do not get a view of what a positive relationship would look like for them. Under-representation of sexual minorities in sexual education may also lead to youths who identify with that community to feeling isolated and as if they do not belong in their school; this may lead to bullying and harassment.

The BC Teachers’ Federation and the Greater Victoria School Board

The BC Teachers’ Federation’s guidelines for sexual health education indicate that LGBTQ relationships and sexuality should be represented in B.C. schools’ sexual education curricula. Specifically, they believe that B.C. schools’ sexual education classes should consider and respect “the diversity of individuals and their families, (including students who are LGBTQ-identified, students from LGBTQ-headed families, or those who engage in sexual activity with others of the same sex, regardless of self-identification).”

In addition to respecting the LGBTQ community, the BCTF believes that the curricula must acknowledge contraception, STI/HIV prevention, sexual orientation, gender identity, and the prevention of abuse and exploitation for both heterosexual students and students in sexual minorities.

Students and teachers in Victoria and Saanich high schools have been concerned with LGBTQ issues in their sexual education curricula since at least 2002 when the Greater Victoria School Board received a recommendation to “deal with safety issues for sexual minorities.” The recommendation calls for an increase in LGBTQ representation in schools’ curricula, a restructuring of codes of conduct to prohibit homophobic attacks (whether physical or verbal), and an increase in support for LGBTQ students.

The sun was streaming through the windows of Shawn Boulding’s office. As I reached to shake his hand, a rainbow-beaded necklace on the shelf caught my eye — a remnant of Mount Douglas Secondary’s once-a-year celebration of the LGBTQ community. Although spacious, Boulding’s office had an air of comfort as I took my seat.

Mallory Roughley, a Grade 11 student at Mount Douglas and member of the cheerleading team, had a different perspective on LGBTQ representation in her school’s sexual education class.

After moving from Seattle, W.A. to Victoria, Roughley was disappointed in the lack of mandatory health classes with full course loads in B.C. schools. Mallory commented, “We don’t even have a health class at Mount Doug. I think they should.”

Although Roughley did get some sexual education in her Planning 10 class last year at Mount Douglas, the class was “only a day long rather than a course load.”

When I asked Roughley if the sexual education that she did receive covered LGBTQ sexual relationships, she replied, “Not really, no. It was mostly sexual talk and ‘be safe,’ and all of that, but they didn’t incorporate [LGBTQ].” With a burst of passion, Roughley added, “But they should have.” Roughley continued by saying that the safe sex talk centred around heterosexual means, such as condoms and birth control.

Last year, Mount Douglas Secondary had a large number of students in their Gay/Straight Alliance club. According to Boulding, 15 students out of approximately 1 100 were members of the club last year, but this year has not been as successful. This poses an issue as they only have “a couple of kids who don’t meet on a regular basis,” and, in Boulding’s opinion, “when the club is a little bit smaller the kids feel more . . . precarious, if you will, like the spotlight is on them a little bit more.” 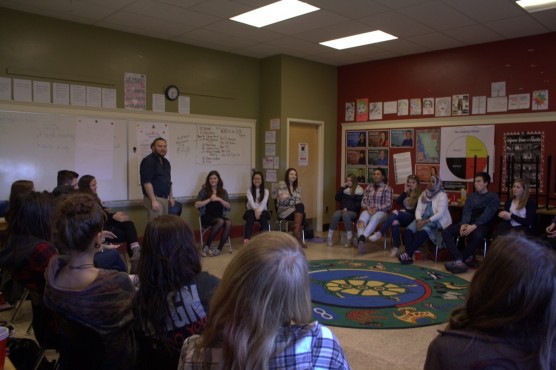 The Family and Gender Studies Class at Victoria High. Photo by Sarah Allan

I think that sex ed should teach a wide range of things. The “sex lady” that comes to our school teaches the different ways to have sex and different sexualities. She also doesn’t shame anyone who is already sexually active. When I first had her for my planning class in tenth grade she helped me realize that I am asexual. I just used to think I was a screw up, because sex had no appeal to me. But she explained that it is entirely normal to be asexual, and I think her way of teaching is how sex ed should be taught everywhere. Her way changed my life for the better and I hope other people can be taught that too.

The Greater Victoria School Board and Planning 10

The Greater Victoria School District’s approach to LGBTQ representation in Victoria Schools is more identity-driven than Mount Douglas’s avoidance of gender pronouns. Deb Whitten, the District Principal of the Greater Victoria School Board, specified the board’s commitment to following the 2002 recommendation to the letter. The board created their Gay/Straight Alliance following the recommendations to give the LGBTQ community an identity in sexual health curricula and in the schools’ communities.

In addition, the schools that fall under the jurisdiction of the Greater Victoria School Board were encouraged to support age-appropriate activities to promote understanding and reduce discrimination against LGBTQ members in their communities. This understanding would go beyond the students to also “increase parental awareness of the needs of [LGBTQ] students and families.”

Many activists believe that glossing over LGBTQ relationships in sexual education and healthy relationships curricula leads to the obscuring of sexual minorities, a kind of erasure. As stated by the Greater Victoria School Board, this leads to “individuals who are dealing with or are perceived to be dealing with issues of gender identity, gender expression, intersexuality or sexual orientation, as well as their families” to be frequent “targets of homophobic, transphobic, or heterosexist behaviours.”

Reading the Planning 10 Integrated Resource Package published by the Ministry of Education in 2007 leaves many questions about LGBTQ sexual safety strategies. The resource package does incorporate “promoting respect for diversity (e.g. race, culture, gender, sexual orientation, age, socio-economics, [and] mental or physical ability),” but that is the full extent of LGBTQ representation in the Healthy Relationships unit. The Planning 10 curriculum also has no explicit mention of contraception. The only sexually transmitted infection (STI) mentioned in the resource package is HIV/AIDS.

Maja Finnsdottir, a graduate from Oak Bay High School in 2012 and member of the LGBTQ community, expressed her disappointment in the Planning 10 curriculum: “The instructor just stood at the front and talked about general contraception. Everyone spent the entire class just trying not to look at her.”

Finnsdottir continued by saying that the curriculum mostly discussed contraception, and did not discuss relationships much. In her opinion, the curriculum lends itself to shaming people who have sex with multiple partners, because it focuses so much on the increased chances of getting an STI.

While the Planning 10 curriculum leaves much to be desired, the B.C. Ministry of Education released a draft of a new K-9 Physical and Health Education curriculum to cover sexual health topics and LGBTQ relationships by including “concepts and content on individual identities, including sexual orientation, gender, values, and beliefs.”

In this revised curriculum, Grade 9 students receive information about “practices that support healthy sexual decision-making; strategies for building and maintaining healthy interpersonal relationships, including respectfully expressing personal identity and sexuality; skills for avoiding or responding to unhealthy, abusive, or exploitative relationships; short- and long-term consequences of unsafe sexual behaviour; practices that reduce the risk of acquiring or passing on sexually transmitted infections and other serious communicable illnesses; and safe use of the Internet and social media.”

This draft of the Physical and Health Education curriculum goes beyond Planning 10 to provide students with information about sexual minorities and means in which they can plan safe sex strategies in their relationships.

The sensitive subject of LGBTQ identification in high school curricula leaves many teachers, and therefore, students, unsure of the best way to tackle the issue. Victoria, Esquimalt, and Saanich high schools realize the importance of the inclusion of LGBTQ issues in both their schools’ community and curricula, but whether or not to specifically refer to each type of relationship sparks debate. 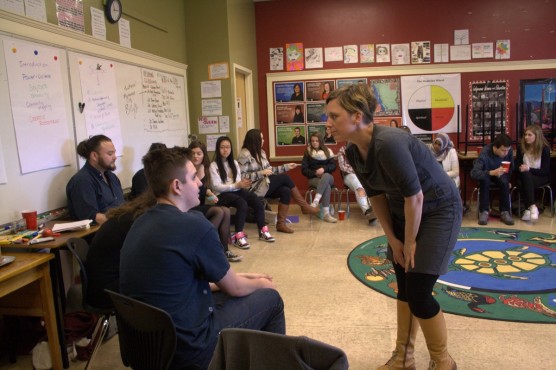 Following Hope back into the Family and Gender Studies classroom, the words “Sexual Consent” written on the board caught my attention.

“It’s time for word of the day!” said Hope excitedly. As the student’s took their seats at the horseshoe desk configuration, one student began to explain the definition of “sexual consent” and what it means to her. Following the presentation, the classroom discussion centred around a drunken ‘yes’ actually being a ‘no.’

Upon my departure, Hope gave me letters her students wrote in response to the changes in the K-9 curriculum. These students want to make their opinions heard to hopefully promote inclusion of sex and gender diversity in B.C.’s sexual education curricula.

Sexual education is when people are educated on sex. In order to educate people on sex, all types of sex must be discussed.

Sexual education is necessary and needs to be done correctly in order to help ensure people are safe and informed.