Smokers speak out about the stigma surrounding cigarette addiction 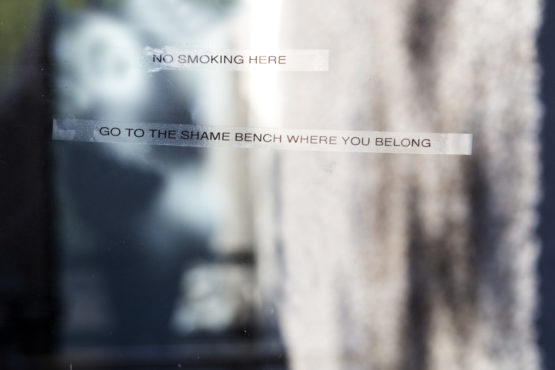 There is a place inside Ring Road, in the shadows of the Clearihue clocktower, where aside from an official UVic sign reminding smokers to clean up their cigarette butts, seems like a world untouched by the university’s smoking policy.

Enclosed by hedges on two sides, it’s a private place, away from other members of the UVic community — an ample location to catch up with friends, have a moment alone, and sneak in a quick smoke break between classes.

Until one day in mid-September, when two stickers appeared.

“No smoking here,” the stickers read. “Go to the shame bench where you belong.”

There are 14 designated benches for cigarette smokers on campus, in addition to two new ones for cannabis smokers. These benches are the only places on campus where UVic’s official policy permits smoking.

“I don’t know exactly who put that up, but it’s not cool,” said Moe Ezzine, a third year engineering student who encountered the signs while smoking with his friends.

Ezzine has often been called “disgusting” by students walking or biking past him as he smokes.

It’s not the first time Ezzine has experienced harassment for smoking on campus. He has often been called “disgusting” by students walking or biking past him as he smokes.

“I once had someone yell at me through the window of one of the buildings I was taking classes in,” said Bret Enemark, a student in Gender Studies who has smoked on campus for the last seven years. “I feel like smokers are looked down upon, either by being given dirty looks or passive-aggressive comments.”

Both Enemark and Ezzine identify as being addicted to cigarettes, although Enemark recently quit in August. As someone in long-term recovery from substance abuse, Enemark relied on cigarettes for a long time to get her through the early stages of battling with other addictions.

Nearly all of the smokers that she knows are addicted to the cigarettes they smoke, Enemark said. For her, the addiction to cigarettes was just as much psychological as physical, if not more.

“There’s a ritual to it and I felt it gave me the freedom to excuse myself from conversations or interactions that I didn’t want to be in,” said Enemark. “It allowed me alone time. Going outside to smoke in the morning gave me a quiet five minutes to start my day. It became a part of my identity.”

“I don’t think people should make fun of addiction.”

However, she made an effort to hide as much as possible when smoking at designated areas on campus, because the anxiety and embarrassment from being shamed began to negatively impact her feelings of self-worth.

“I don’t think people should make fun of addiction,” said Ezzine. “I would appreciate if someone [took] the effort to come talk to me [about quitting smoking], cause that’s very nice of them. But then if someone’s gonna be calling me disgusting and putting up signs like that, I think it’s just [not good].”

Ezzine makes a point to adhere to provincial law by smoking away from minors and at least six metres from building entrances.

He typically smokes inside Ring Road, which is against UVic’s smoking policy. But many of the designated benches where he is supposed to be smoking at, Ezzine notes, are along walkways and near bus stops that many non-smokers have to travel past.

Campus Security officers regularly patrol the campus to ensure the smoking policy is being upheld. For the last two years, this has included redirecting smokers to designated smoking benches, although Campus Security is not authorized to give out tickets or strongly enforce this policy.

Additionally, student smoking ambassadors work four to six hours per week to raise awareness about the university’s smoking policy and politely make smokers in violation of the policy aware of the smoking benches.

On average, Ezzine smokes about half a pack per day, and for him, a 10-minute break between classes is simply not enough time to bother detouring to a designated smoking spot outside Ring Road. Instead, he finds discreet areas away from students, like below the Clearihue clocktower.

Ezzine suspects … whoever placed the signs attached them from inside the glass wall, which is adjacent to a locked door that Ezzine has only ever seen accessed by university employees.

But not all students keep their smoke to themselves. Walking along the quad, it’s common to see people vaping on the way to class, or find cigarette butts scattered around bike racks.

“[Being] stuck [behind] a long trail of smoke is absolute torture,” said Lila DeTreaux, a student who is currently taking some time off. “[Inside Ring Road is] a designated smoke-free area for a reason—smoke is toxic. When I am trying to walk between classes, it’s important that the fresh air clears my head.”

For DeTreaux, secondhand smoke impacts her ability to study, focus, and recharge between classes. She values the university’s decision to prioritize clean air inside the Ring, especially since it’s normal to encounter smoke downtown and in other areas of Victoria.

But Ezzine suspects it wasn’t a concerned student like DeTreaux who put up the signs. Whoever placed the signs attached them from inside the glass wall, which is adjacent to a locked door that Ezzine has only ever seen accessed by university employees.

“We need to have an open conversation [about smoking] as long as everyone is civilized.”

The Martlet reached out to Kane Kilbey, Associate Vice-President of Human Resources at UVic, for comment. Kilbey, who was not previously aware of the signs, said they will definitely be removed.

“We would encourage the smoking ambassadors in particular, when they’re doing their walkabouts, to ensure that only official university signage is in place,” said Kilbey. “Because that’s the kind of consistent message that we want to send to our campus community.”

At the time of writing this article, the signs remain in place. In the future, Ezzine hopes that a more thoughtful and constructive discussion can arise from this issue.

“We’re mature people,” he said. “We need to have an open conversation [about smoking] as long as everyone is civilized.”