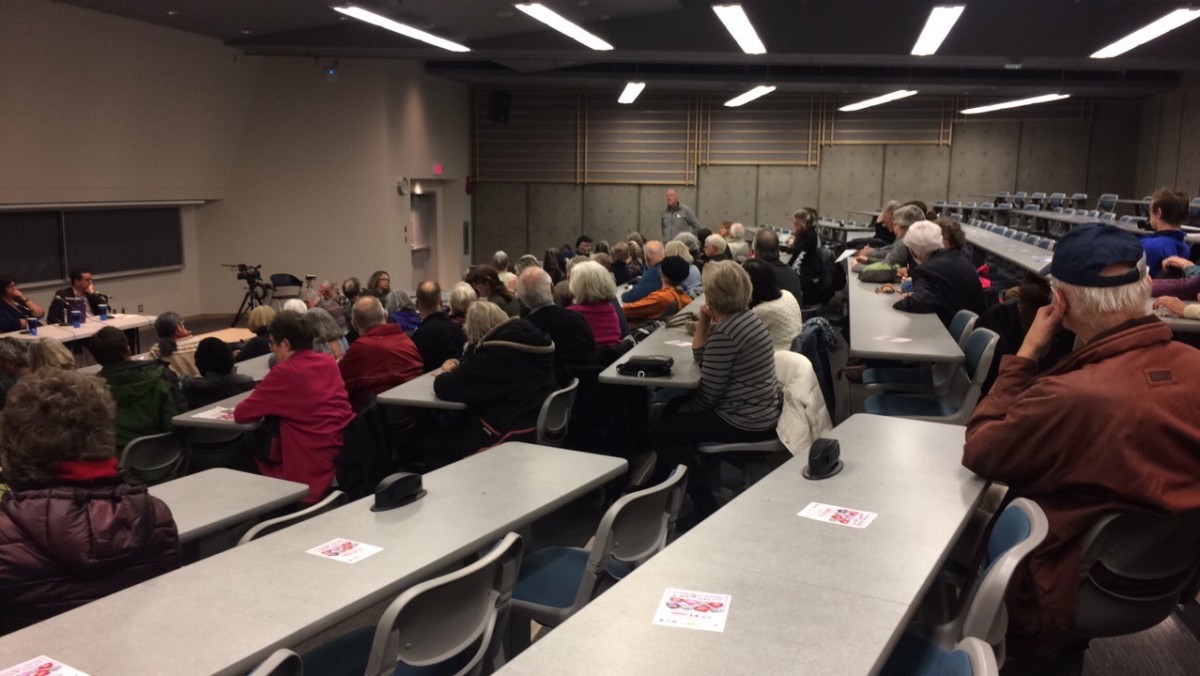 A panel on the Site C Energy Project drew a number of community members to UVic on Feb. 9. Photo by Kaitlyn Kokoska, Staff Writer

Over 130 community members gathered in the David Turpin Building on the evening of Feb. 9 for “Save the Peace, Protect the Future,” a panel event on the possible outcomes of the Site C Dam project.

The project has been hotly contested since its original proposal in the 1950s, but the provincial government decided it was no longer necessary in two separate decisions in 1982 and 1989 after the energy created from two other dams in the Peace River region surpassed the demand.

Site C was put on the table again when then-premier Gordon Campbell resurrected the project in 2010, and it has remained a political talking point ever since.

The first panelist, Dr. Harry Swain, is an associate fellow at the Centre for Global Studies at UVic. He spent two years as chair of a federal-provincial joint review panel in charge of evaluating the Site C Dam, and was the author of a 2014 report that green-lighted the project, though he now opposes it.

While writing the report, which was completed in a hasty eight months, Swain and his team were only allowed to look at the project itself, and not offer any alternatives. During the forum, he discussed the economic gains, or rather, minuses if the estimated $9.9 billion project goes through.

“If there isn’t a big plus on the economic side, there’s no need to spend time assessing the environmental and First Nations downsides,” said Swain.

“The price of electricity in British Columbia was essentially flat since 1970 through to about 2013, or 2014,” said Swain. “It was so low that none of us have essentially been paying attention to it.”

Judith Sayer, a board member of Clean Energy B.C., and adjunct professor of Environmental Studies at UVic, also spoke strongly against the project and the current provincial and federal governments that are pushing it forward.

“Can we really have politicians that are so unvisionary [sic], way back in time, that they would approve Site C?” said Sayers. “There’s so many different ways to produce power in

this day and age, and how short sighted it is that they would do this.” The final speaker of the night was John Gailus, a member of the Haida Nation and a lawyer with DGW Law Corporation, who spoke to the frustration that projects like these cause when the province is considering treaty rights.

The provincial government “acts as though they can take up lands to effectively extinguish the [treaty] rights, and that’s what’s going to happen here,” said Galius.

“Given . . . the cumulative effects [of the dam], [they] need to consider whether or not by approving this project [they’ve] crossed the line. [They’re] going to breach the treaty.”

Following the panel, the floor was opened up to the crowd for a Q&A period. The resounding feel of the night was that the B.C. Liberal-majority

government would need to be voted out in the next election in order for the project to be halted. But the last question of the night was from a community member that wasn’t so on board with the idea.

“I’d like to talk about promises, because we’ve talked a lot about that, and we’ve talked about broken promises from the federal Liberal government. What assurances can we get, if we vote the Liberals out, that the NDP are going to any better?” they asked. “What can we do to hold their feet to the fire?”

Sayers only acknowledged the challenges presented by leaders who say one thing during a campaign and do another, and said voters have to put their faith in individuals to do what’s in their constituents best interests.