It seems like every week that new contentions arise surrounding the controversial Site C Energy Project.

The project, a proposal to dam the Peace River in Northern British Columbia, has been flooding headlines for nearly a decade, and taking up provincial budget plans for three more.

And while newspapers and political pundits talk about the dam as if we all know the long, arduous history behind it, the truth is that few truly understand the story behind and around the Site C Dam. 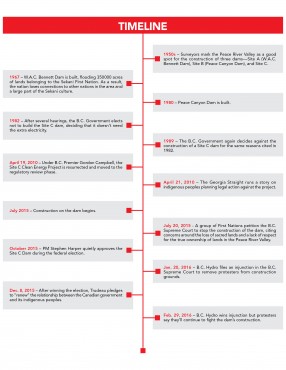 Click the image to see a full timeline of the Site C Dam.

First, the facts. The Site C Dam site lies within the Peace River Valley, just a few kilometers southwest of Fort St. John. It was first proposed in the 1950s along with two other Peace River dams, but while the W.A.C. Bennett (Site A) and Peace Canyon (Site B) dams were built, an electricity surplus postponed construction on the third dam until former B.C. premier Gordon Campbell resurrected the project in 2010.

The dam is slated to be completed in 2024 and is projected to produce 5 100 gigawatt hours of electricity each year — the amount of energy needed to power about 450 000 homes per year in B.C.

But for all of the promises made by both B.C. Hydro and the B.C. government that the dam will help meet the energy needs of the province over the next few decades, critics are concerned that the project is not as squeaky clean as it seems.

The project’s cost has ballooned from $5 billion to $9 billion in nine years. B.C. Hydro calls the Site C Dam a clean energy project, but critics argue that emissions from the construction of the dam outweigh any benefit. B.C. Hydro also says the dam will create jobs — and crowded job fairs in Alberta and B.C. prove their point — but critics point to the destruction of farmland as a loss that’s too great to bear.

Protesters have camped out on the steps of B.C. courthouses and on the banks of the Peace River for several months now, but it appears as though B.C. Hydro is winning the war. Construction on the dam began in the summer of 2015, and on Feb. 29, B.C. Hydro won an injunction allowing the company to remove protestors from the site of the project.

Opponents of the dam are preparing to continue to fight in the B.C. courts as well as call on Prime Minister Justin Trudeau to intervene in the construction of the dam. Trudeau’s comments upon being elected suggest he takes First Nations land claims a lot more seriously than the previous government, but whether this one is willing to be intimately involved in provincial affairs is yet to be seen.

Unfortunately, it seems whichever side wins — whether the dam is completed or not — the results will be devastating. If the dam is constructed, First Nations land treaties take a huge blow and several nations risk losing traditional lands. If the dam is stopped, the government will have wasted several billion dollars from generations of taxpayers and will most likely turn to fossil fuels to fill the energy gap left by the dam.

The outcome will likely depend on what British Columbians favour more – short-term and long-term job creation and a move towards (dubiously) clean energy, or sustainability, self-efficiency, and the respect of First Nations land claims.

But if the history of the project so far is anything to go by, don’t expect a simple or easy solution.