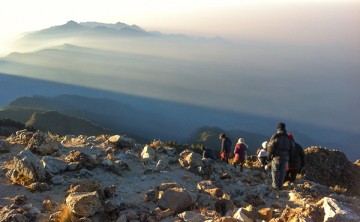 View from Tajumulco, the highest mountain in Central America at 4 220 metres above sea level.

I arrived in Guatemala last December with a backpack and the Spanish word for cookies. Galletas. I’d learned that one from the stewardess during the in-flight meal. That and a couple phrasebook niceties were all I had. The goal then, to learn Spanish in four months, appeared rather impossible.

I had picked Guatemala purely for practical purposes. It is cheap and the accent is one of the clearest in Latin America. Its language schools are famous for their efficiency; foreign travellers with rudimentary Spanish are up there with cardamom and coffee as the country’s greatest domestic products.

The technique is simple. One teacher for one student, four hours a day, five days a week, as much Spanish as humanly possible. English is only used to explain the basics, if at all, and then it’s Spanish from there on. Students usually stay with a local family, an excellent way not only to practice but also to learn about Guatemalan culture. Many people only take a couple weeks at most, electing to acquire a base in the language for a journey through the rest of Central America. Others stay longer to learn the language out of interest or for professional reasons.

My first month was one of hapless gestures and repeated mistakes. Putting together even the simplest of sentences made my head hurt, and everything anyone said was indecipherable. But slowly, my Spanish became more fluid and I began picking words out of this new world of sound. Learning a language is like solving a huge organic puzzle. Bit by bit, a mess of pieces begin slotting themselves into place: a new name for everything. By end of the second month, I felt confident enough to leave school and tour Guatemala.

The school I had chosen was in the tourist hub of the country: Antigua, a city of first-world priced coffee, mouldering church ruins and looming volcanoes. It’s a fantasy town, a place where the dirt and poverty hover around the edges. Upon leaving, I found myself confronted with the “real” Guatemala — a place I perceived as an incredibly poor country with a host of serious problems: malnutrition, rampant corruption and violent crime ad nauseam. While the country suffers, multinational corporations gorge themselves on its abundant natural resources.

But the diversity of the place is stunning. In the south lie the highlands, including some of the highest peaks in Central America. In the north, the port town of Rio Dulce harbours yachts riding out hurricane season and the hot, flat jungle plains around Flores hide the magnificent Mayan ruins of Tikal and El Mirador. Guatemala caters to whatever kind of tourist you want to be. Want to party? Lago Atitlan. Want to volunteer? Xela.

The people are another of Guatemala’s joys. Residents exhibit a friendliness that is baffling simply because it is contrary to the relentless dirge of bad news. They become all the more affable when you make an effort to speak their language. Outside the major cities though, Spanish is uncommon; in fact it is a second language, at best, for 40 per cent of the population.

Guatemala is home to 21 indigenous Mayan languages, and these are very much in use. The abrupt glottal stops of these languages stand in sharp contrast to the smooth flow of Spanish, emphasizing the alien nature of the European language that took over here so long ago. That conquest still has its echoes; the Spanish-speaking population — the Ladinos — arguably make up the ruling class, and racism still exists against the indigenous. The separate languages of the diverse ethnic groups may make it difficult for them to unite to fight for their rights.

After a month of touring the country and practicing my Spanish in local bars, I returned to school loaded with Spanish slang and swear words. I was now speaking Guatemalan. I finished learning the grammar, and so, on April 9th, I left Guatemala with a machete, a backpack and the ability to converse with 406 million more people. I am far from fluent — I need to continue to train my ear and expand my vocabulary, but those four months are among the most rewarding learning experiences of my life. I came to love that beautifully dirty country and hope to give something back in the future in return for all it’s given me.