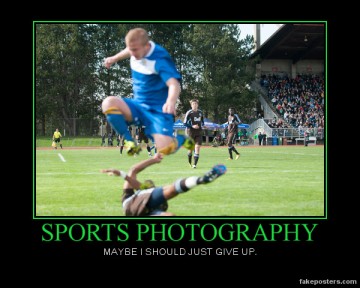 If you think sports photography is hard, that’s because it is. The technical considerations are crucial yet difficult to master, and the equipment can be more expensive than the car it’s thrown in. However, the best sports pictures are the simplest ones. They make concise statements that can describe a two-hour game in 1/1000th of a second. Every extraneous element is judiciously cropped out, leaving only the decisive moment. I had the opportunity to put some of these philosophies to work last Saturday at the exhibition match between the UVic Vikes and the Vancouver Whitecaps, and some were more effective than others, to say the least.

Early on, I made it my mission to capture a complete game, which included action shots as well as shots of the crowd. I could do this because I was not shooting alone. An able volunteer, Elaine Vallis, agreed to help cover the game, so that gave me the freedom to explore the stadium while she concentrated on the action.

One thing I learned is the importance of packing carefully. It’s not about bringing every lens, just the right ones. For soccer, my super wide-angle lens was absolutely useless. I brought it to use while wandering through the crowd, but the wide field of view gave me two equally unappetizing options: either violate the personal space of a single audience member and wait for a compelling reaction to the game, or try to take in the entire crowd, which would probably not yield a concise enough idea. Instead, I should have chosen a midrange zoom like a 24-105mm, but I’d left my midrange zoom at home thinking I wouldn’t need it because it’s known as the “bad picture lens,” one that yields uninspired photos due to its sheer “normalness.” It’s true to some degree, but keeping one of those in your back pocket, especially on a sunny day, is not a bad idea. I ended up shooting some of my audience shots on film with the 50mm lens parked on my Nikon EM, which is probably a blog post on its own. 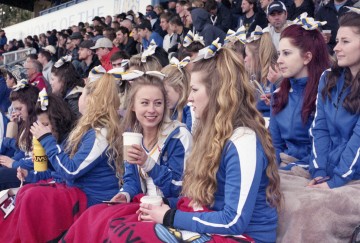 UVic Cheerleader Krista Lowe watches the game with her teammates.

During my time on the field, I tried to isolate the players, but with a 70-200mm lens, my reach was limited, even with the 1.5x crop of my D300 factored in. Without the benefit of a longer lens, I had to wait for the action to come to me. Trying to shoot action on the other side of the field is an exercise in frustration and is just a waste of time. The players will be extremely small in the frame without a serious crop, but the cropped images still won’t look as good because they will lose sharpness and immediacy. Through perspective, it’s easy to tell the difference between a cropped image of faraway action versus action that is almost on top of you. I prefer the latter. Wait until they get close before shooting. 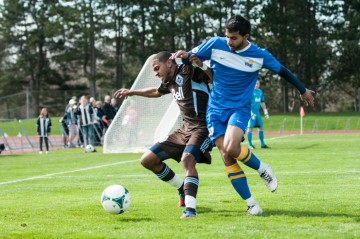 Ethen Sampson of the Vancouver Whitecaps battles UVic’s Cam Hundal for the ball during the Vikes vs. Whitecaps exhibition game on March 16th.

I also had to resist the urge to move. It sounds counterintuitive, but staying put for a good long time is necessary. Do not fear monotony in your pictures, because if you keep moving, you won’t get one to begin with. Sooner or later, the action will come to you, and when it does, you will be ready and waiting. When you do get something, feel free to move, but stay there at least twice as long as you think you should. Unless one team is clearly dominating the other and the vast majority of the action is occurring far away from you, stay put. 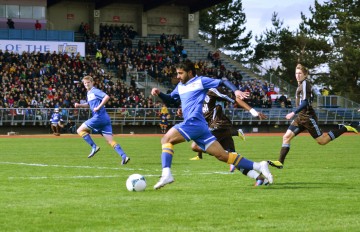 In an email, Elaine Vallis explained her technique. “I like to find one location with a good view of the game, and let the action come to me . . . that way I can just constantly shoot without having to worry about missing the shot because I’m moving or resetting my camera.”

Keep the audience in your background if possible, especially if it’s a big crowd. Flagpoles and stadium lights don’t usually make for very good backgrounds. If you’re close enough to the crowd, their enthusiasm just adds to a good action shot.

Getting low to the ground can be nice so it makes the players look more heroic (many pros will shoot from a crouching position), but I will get off the ground from time to time to vary the look of the shots and to give my knees a rest. Speaking of knees, bring kneepads. Specifically, those gel-filled ones that floor layers use. If you’re spending a lot of time like this at any sporting event, these stupid-looking things will keep you comfortable. I’ve got to thank author Scott Kelby for that tip.

Kneepads aside, I’ll admit that this is sounding a little expensive. However, the two best sports pictures I’ve ever taken were shot with a Nikon 80-210mm f/4 manual focus lens that I got from someone’s basement for free and my D90 body. As long as you have any kind of telephoto (even a 30-year-old one) and a half-decent digital SLR body, you still have a hope of shooting outdoor sports. I’m sure you’re not afraid of a little more legwork, or in this case, manual focus work. 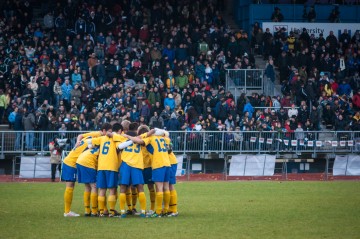 The Vikes men’s soccer team huddles just before the second half of the CIS Gold Medal game at Centennial Stadium on November 13, 2011. 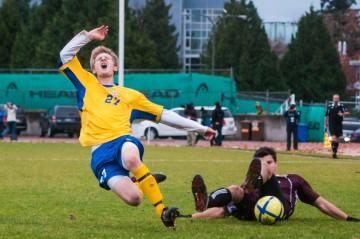 Craig Gorman (27) of the UVic Vikes trips during the CIS Gold Medal game at Centennial Stadium on November 13, 2011.