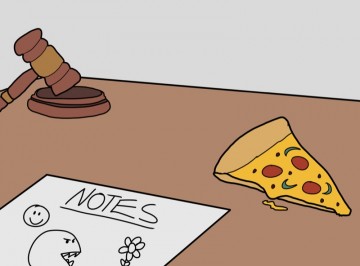 Humour — This afternoon Stephen Harper addressed the public on behalf of the entire Parliament to apologize for actions in yesterday’s budget meeting. “I’m deeply sorry for our actions yesterday,” stated Harper in the address. “We didn’t want to mislead anyone and we were not responsible for our actions.” In yesterday’s meeting of Parliament, an odd turn of events unfolded. The meeting was to address the country’s budget outline, but it quickly turned in a different direction. It started with NDP leader Thomas Mulcair who, according to sources, rose up to object with well plotted-out points to Harper’s proposal of education budget cuts, but instead only ended up stating, “That’s just like, your opinion man,” after a long pause, and suggested the speaker should ask Harper to “chill out.”

According to sources, an odd silence of the entire Parliament resulted from Mulcair’s statement, followed by small amounts of giggling by members from different parties. Harper reportedly rose in response to Mulcair’s statement, but instead of speaking, looked at his open hands for an undisclosed period of time. The speaker requested Harper state his response or sit down so the meeting could continue, to which Harper replied solemnly, “No man, you’re right. I’m sorry, Tom. Just sometimes I get wound so tight. It’s hard being prime minister . . .” Reports indicate that Harper then stepped out of his seat, walked into the open floor and asked Mulcair to “Come ‘ere and give me a hug!” Mulcair complied, stating “I love you man.” The entire Parliament reacted by flooding the floor and giving hugs in massive amounts.

This action was followed by the passing of two new bills: one to give free pizzas on Fridays across the country and one to allocate funding to all the nation’s community centres to be spent on bean bags and bouncy castles. Unfortunately, investigations that followed the suspiciously large amounts of hugging during the Parliament session showed that weed brownies had been snuck into the lunch entree carts before the Parliament meeting. It is estimated 80 per cent of all members in session partook in those brownies before the call to order. A deeper investigation has begun, but no suspects have been found yet. “We aren’t sure who did it or why,” states Michaelangelo Sheppard, head of the investigation. “But we will get to the bottom of this. Never again will we have a horrific Parliament hugging incident.”

Due to Parliament being under the influence of the “wacky tobaky” during their last meeting, all ideas and statements suggested at the time have been dismissed, including the two bills and budget suggestions. According to sources, major headway had been made in regards to the country’s budget. One witness recounts, “. . . everyone just stopped arguing and started focusing on the major issues.” Within two hours, Parliament had reportedly balanced Canada’s budget. Finishing early, Parliament then spent the last two hours voting on which pizzas to order for dinner, finally deciding on meat lovers’.