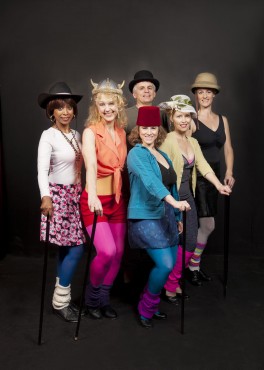 The talented folks at Langham Court are grooving to a new beat in their fresh rendition of Richard Harris’ Stepping Out. At once witty and resonant, this comedy delves into the joys, sorrows, and limitations of eight oddball tap students, their poised but world-weary instructor, and the cantankerous woman who accompanies them on the piano. Full of rich, witty dialogue and exaggerated body language, this production is sure to make you chuckle, even as you find yourself more and more immersed in the compelling and fully realized lives of these painfully relatable misfits.

I’ve spent a lot of time in dance studios, so Bill Adams’ set design immediately evoked the conflicting feelings of comfort and anxiety that I associate with the dance classes of my past. His minimalist setting contrasts brilliantly with Chris Stusek’s exuberant costume design, which quickly and effectively defines each of the play’s central characters. Some, like Sylvia (Suzanne Bell) and Maxine (Elizabeth Brimacombe), shamelessly flaunt their brightly coloured ensembles, while others, like Andy (Keeley Teuber) and Geoffrey (Michael Romano) — the only man in a class full of rambunctious women — persistently but unsuccessfully endeavour to melt into the background.

Even though the play is female-dominated and focuses on an older age group, it has enough quirk to keep everyone interested. Each scene presents a wide range of human interactions, and the story progresses with a fragmented, class-by-class structure that allows the audience to learn about these characters as they learn about each other. For this reason, Stepping Out feels more like a slice of life than a full-blown comedy. In fact, I would have settled into its undertones of tragedy much easier if I didn’t go in expecting a comedy. 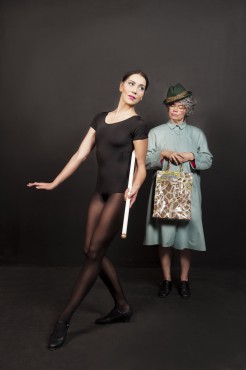 Toeing the line between introspection and extroversion, Stepping Out offers something different to everyone, even if you have never taken a dance class. As far as I’m concerned, Langham Court Theatre is the place to go when you have a hankering for live entertainment.

Tapped out! Stepping Out is now sold out, but if you still want to get your theatre on, just visit langhamtheatre.ca/boxoffice/calendar to see what else is in store this season.