Correction: The article was originally published with a graphic that did not accurately represent the new research, and has been removed.

Researchers at the UVic Division of Medical Science asked why diabetics are more vulnerable to stroke damage than non-diabetics. In their research, they found cancer drugs improve stroke recovery in mice, a promising breakthrough that will hopefully improve the recovery of stroke patients with these risk factors.

Dr. Craig Brown, along with other UVic medical science researchers, just submitted a paper for peer review with new microscopic imaging showing that diabetes (a common risk factor for stroke patients) leads to an abnormal increase in blood brain barrier permeability and brain dysfunction after stroke. The blood brain barrier is primarily composed of special endothelial cells forming the walls of the arteries and capillaries throughout the brain.  After stroke, these endothelial cells allow proteins and other material, normally kept out, into the brain. How can the barrier be tightened in these patients, preventing inflow of toxins?

Remarkably, his lab has shown that administering an existing cancer drug to diabetic mice can reduce blood brain barrier dysfunction and improve stroke recovery. Dr. Brown thinks that treating lingering circulatory or “plumbing” issues of the brain after stroke should improve patient outcomes. “In order to reduce, say, cognitive dysfunction in various conditions, you can try and treat the neurons but if there is still this problem with the blood brain barrier it’s provbably not going to matter if you save these neurons if the blood brain barrier is still dumping a bunch of toxic stuff into the brain.” 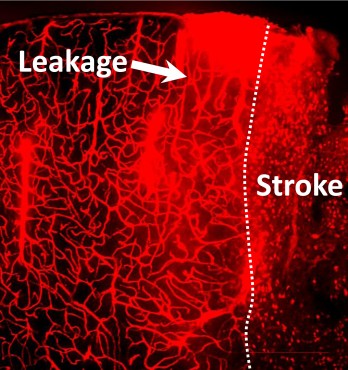 In lab experiments, UVic researchers injected fluorescent red dye into mice. During a stroke, the dye leaks into the brain in an area known as the dead zone. Brown’s research seeks to reduce this permeability, which harms the brain and impedes stroke recovery. –Provided (illustration)

Microscopic images help communicate the research in greater detail. “After stroke, the blood brain barrier becomes permeable,” Brown explains. “The cells that line the blood vessels, the endothelial cells, are taking up proteins and bits of stuff from the blood plasma and transporting it across the so-called blood brain barrier.” This is a problem for the brain because blood from the body contains many things that are toxic to it, including bacteria, hence the reason a blood brain barrier exists in the first place.

According to Brown, the brain loses 1.9 million neurons per minute after a stroke. When the arteries that supply oxygen to neurons stop flowing with blood, the neurons diminish in capacity, and this spreads like a wave cascading through the vast oceans of connected arterioles, eliminating as many as 14 billion neural connections—synapses—per minute. Neurons die over the first four hours and may continue to weaken for weeks afterwards. In spite of this, Dr. Brown points out that recovery is still possible long after injury.

Dr. Paul Zehr, a UVic neuroscientist and kinesiologist agrees that the blood brain barrier is more than a simple sieve; it is a biological barrier that is more dynamic than is generally understood. “Trying to get a handle on stroke, regardless of the diabetic piece; that in itself is important so we can understand better strategies for recovery of blood flow and what it is really going to do . . . I think if we can gain a better appreciation of what is actually happening in the stroke frame and all the cascade of events we have a better way to try think about what kind of strategies can be applied right away to [brain] injury, regardless of the source.”

Getting medical assistance immediately by recognizing the symptoms is important to a successful recovery. Five main symptoms include: weakness, slurred speech or language difficulties, visual problems, headaches, and dizziness. Keeping blood pressure down by minimizing salt intake, eating a heart-healthy diet, staying smoke-free, and exercising will reduce the risk of a stroke.