Students a major part of UVic’s impact on the local economy, but who supports students? 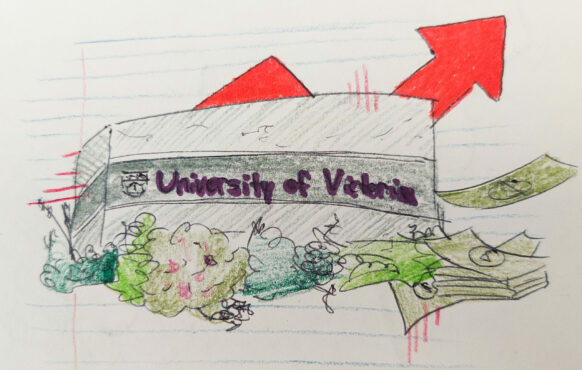 On June 20, a report was released detailing the economic impact of the University of Victoria on the provincial and local economies. The independent report by Emsi Burning Glass (now Lightcast) revealed that the total economic impact of the university was $1.9 billion for Greater Victoria in 2020–21, or one out of every nine jobs in the area. The analysis took into account numerous factors, including student spending which added $158 million to the local economy.

“UVic is a proud partner in the Greater Victoria and BC economy,” said President Kevin Hall in a statement released by the university.

“The investment in our students, research, and operations creates benefits for local businesses, community partners, taxpayers, as well as society as a whole by creating a more prosperous economy. Without a doubt, our ability to make this impact relies on our partners and supporters.”

While the numbers are jarring at first, it’s no wonder that the approximately 22 000 students studying at UVic are such an economically powerful demographic within the Greater Victoria community. The housing crisis and rising cost of living are making student life in Victoria more expensive, less accessible, and generally more difficult.

The vacancy rate in Greater Victoria has dropped to just one per cent, and in 2021 the average cost of rent increased by three per cent. Saanich, a popular area for students, saw a rent increase of 5.6 per cent in 2022, the largest in Greater Victoria. It’s a problem Canadians are facing around the country, and Victoria is no exception, especially for students, as many are renters.

After the initial release of the report, President Hall wrote a commentary for the Times Colonist titled “UVic is a major part of Greater Victoria.”

According to Hall, 2 500 places will be available on-campus for students this fall. Although it’s more housing than UVic has provided in the past, the other 19 500 students are in for a challenge.

“Finding housing for all 22 000 UVic students requires support of legions of local landlords and housing providers who we count on as community partners,” said Hall. “UVic’s economic impact is directly related to the people in our community who make sure our nearly 30 000 students, staff, and faculty have a place to live.”

Some of us are lucky enough to find landlords who rent to students for less than market value or with no references, but it’s mostly students who make sure we have housing. We go over our budgets, take out bigger loans, and accept long commutes or basement suites with mold. We’ve all heard stories about people deferring their studies because they couldn’t find a place to live, living in vans, or breaking the maximum occupancy laws.

Despite how much of the rental market students make up and the contributions we make to the local economy, we’re at a disadvantage. According to the report, UVic students lost $399.5 million between 2019 and 2020 while completing studies instead of working. Yet we’re competing for limited housing against people with full-time or dual incomes and who aren’t discriminated against for being ‘reckless students.’ A lot of us are also new to renting, with fewer references than other applicants.