Looking for a place in Victoria’s packed rental market can be a hell of a grind: the monotony of trolling endless rental postings, going on repetitive tours of dingy suites, and stressing out about whether one can afford rent can all make for a miserable experience.

All that aside, nobody goes through the process expecting to receive racially discriminatory comments from a prospective landlord.

That’s exactly what happened, however, when Natalia Carranza, a third-year microbiology student from Colombia, told a prospective landlord that she wouldn’t be renting a basement suite five minutes from UVic listed on Places4Students.com 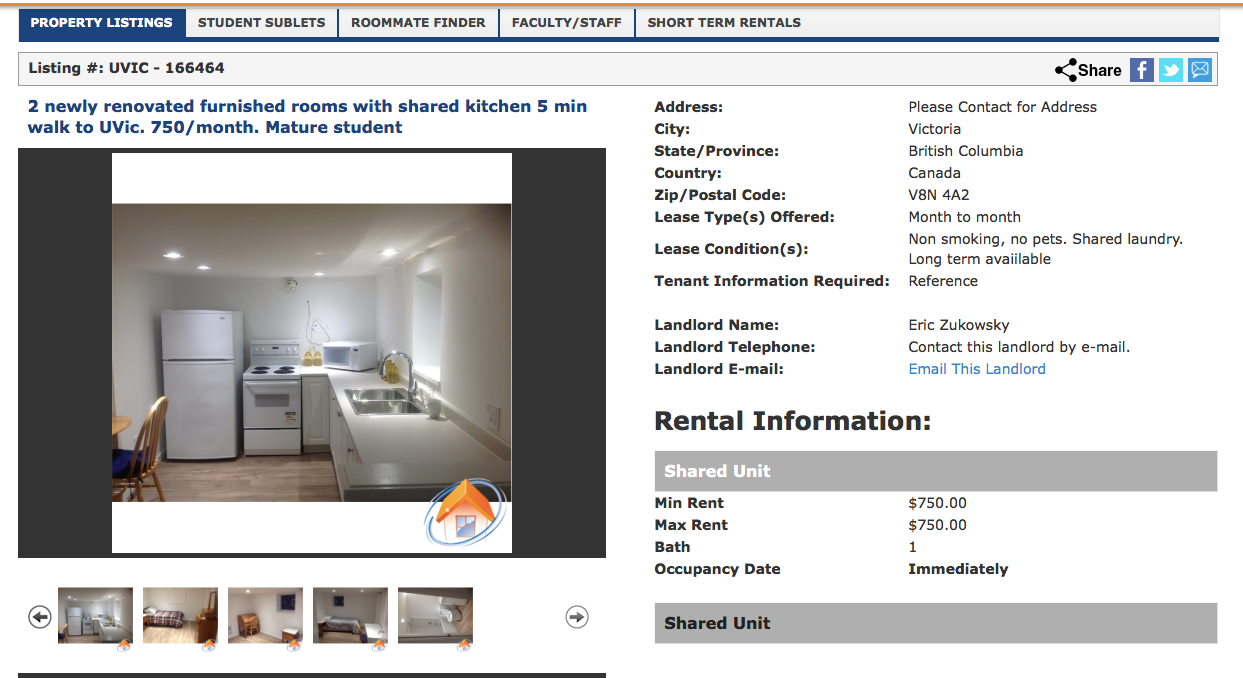 On Friday, Feb. 17, Carranza posted a screenshot on a UVic housing Facebook page of a text message conversation she had with Eric Zukowsky, who Places4Students.com names as the landlord.

On Facebook, Carranza explained that she couldn’t take the room because her queen-size bed was too large, and she told Zukowsky that she can’t buy another one. When Carranza said she was going to decline, Zukowsky responded by thanking Carranza for her interest and wishing her luck in her search.

But Zukowsky then sent a second text message, meant for his daughter, in which he said, “After all that, she is no longer interested because she supposedly has a queen size bed she wants to use. Latinos are off the list for consideration. Koreans and or Japanese students only.”

Carranza provided the Martlet with screenshots of Zukowsky’s subsequent texts after she called him out.

“My apologies for my earlier comments,” Zukowsky wrote. “I do not disparage the Latino community or any nationality for that matter and I shouldn’t have used any qualifier in addressing prospective tenants.

“However,” he continued, “I must admit I was disappointed with your approach in expressing interest when you can have simply said at the beginning of our dialogue that you had your own furniture. That would have ended the discussion.”

Zukowksy then asked Carranza to refrain from contacting him further, “as our business relationship is now over.”

Screenshots of the conversation provided by Carranza are included below.

Speaking with the Martlet over the phone, Carranza said that she was looking for a place for mid-April/May, and that she had been in contact with Zukowsky for a few days prior to Friday. But she said she never gave a firm commitment to Zukowsky one way or the other, and after being shown a video of the room, she realized it wouldn’t work.

When Zukowsky responded the way he did, Carranza said she was shocked. “I was extremely mad about it,” she said. “I have the right to say no if [the room] doesn’t fit my needs.”

When asked for comment, Zukowsky told the Martlet via email that he was led to believe Carranza was interested in the room, and that “being more candid upfront would have saved both of us a lot of time.”

Zukowsky said the text written for his daughter was meant “in jest,” and was “a poor choice of words to express my frustration.”

Laurie Snure, general manager of Places4Students.com, told the Martlet that they had reached out to Carranza and take discriminatory matters “very seriously.”

“The landlord has been blocked from our service and will no longer be able to advertise his rental vacancies to students through our website,” Snure said. The rental posting has since been removed.

“Just because I choose not to have [the room], you don’t have to blame all the Latina community,” Carranza said. “That’s what I was really pissed about.”

CORRECTION: A previous version of this article spelled Colombia with a ‘u,’ as in ‘Columbia.’ We regret the error.