EDITORIAL: Super InTent City is just the tip of the iceberg 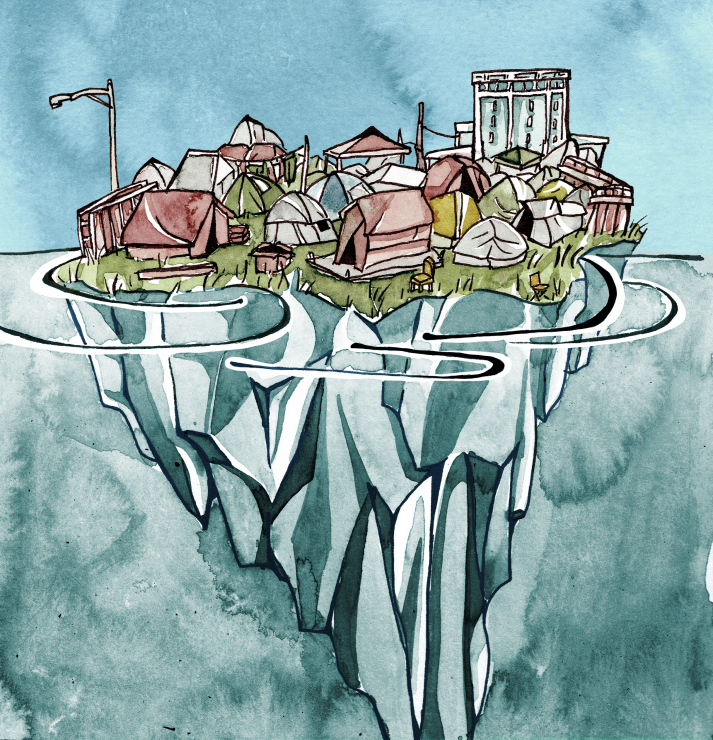 More so than ever before, the last few weeks have been a trying time for residents and neighbours of Victoria’s Super InTent City. On May 27, one of its residents was arrested for assaulting a CTV cameraman — one of two instances of reported violence in a 24-hour period. And now the province has filed a second injunction, the court date for which has been set for June 27–28, in an attempt to evict the campers.

And Mad As Hell, a community group advocating for the tent city’s removal, has all the while been raising their voices louder and louder, calling for the city and province to take action. But what could have been a productive and reasonable initiative built out of concern for all involved has instead turned into an open forum for the haves to call the have-nots “garbage,” “freaks,” “criminals,” and any other sort of derogatory remark you can think of.

Surely we’re better than this, right? These sentiments demonstrate a blatant and wilful disregard for the circumstances that put the city’s homeless in such a dire and desperate situation in the first place. You’re familiar with these circumstances, no doubt: lack of affordable and low-income housing here (and elsewhere), reduced wages and increased unemployment rates due to economic recession, lack of adequate support for those living with mental illnesses and people with disabilities, reduced medical and pension benefits, the increased cost of living, fleeing domestic abuse, single parent incomes, and so on. These causes of homelessness have all been well documented; indeed, B.C.’s own auditor general, Carol Bellringer, has stated that the current provincial healthcare system underserves highly vulnerable patients, including those “suffering from an acute mental illness with a long history of hospitalization and substance use issues,” and that those gaps in service are made worse by lack of resources for discharged patients. On top of that, Victoria has the lowest apartment vacancy rate — 0.6 per cent — of any major city in Canada. And on top of that, Vancouver and Victoria have some of the highest costs-of-living in North America. And on top of that . . . well, you get the idea.

To ignore these facts in favour of arguing that those living in the tent city “deserve” what’s happened to them, and that we should ship ‘em off (or let the “bleeding heart liberals” host them in their own backyards), is foolish at best and actively harmful at worst. But it’s so easy for Mad As Hell and other detractors to point to the recent incidents of violence and say “this is what happens” and to damn the many based on the actions of the few. Not to mention that there is a lack of evidence to implicate any residents from tent city in these crimes anyway, with the exception of the arrest for the assault of the cameraman already mentioned.

Ultimately, dismantling the tent city and forcing its residents back onto the streets or into overcrowded shelters without proper top-down solutions in place will do more harm than good. Chief Justice Hinkson echoed this in his original ruling in April when he said the benefits of the tent city for its residents outweighed any perceived inconvenience for its neighbours, and that they should be allowed to stay where they are until there’s accommodation elsewhere. Perhaps the organizers and supporters of Mad as Hell should consider that sentiment: being uncomfortable at the state of someone else’s existence does not mean that you can just force them out of being.

Since the original injunction, B.C. housing minister Rich Coleman said that Victoria will have 140 more affordable housing units by the time of the next hearing, though he still has yet to disclose where these units are located. He has also stated that “anybody that’s there that is legitimately in need of housing that’s homeless [sic] will have a place to go along with support and meals to help them.” Again, no details have been provided as to what these supports will look like beyond providing adequate nutrition, entirely missing the point that much of homelessness is intersectional and that solving the problem over the long term requires more than just a roof over someone’s head (not to mention the questionable notion that there is “legitimate” and “illegitimate” homelessness). We need look no further than Medicine Hat to see that it is to everyone’s benefit when our homeless population is provided with the multi-faceted supports that they require in order to make housing security a long-term result.

Yes, the tent city has its share of problems, and there will be conflict when issues like this come to the surface as strongly as they have. But that’s what happens when the invisible become visible; you have to take notice. So rather than calling for authorities to force the tent city residents off the land they have occupied, maybe instead show some compassion, and call upon the powers that be to act in the best interests of the disenfranchised among us.