Ten days with the Honduran Resistance: A social movement enters the political arena 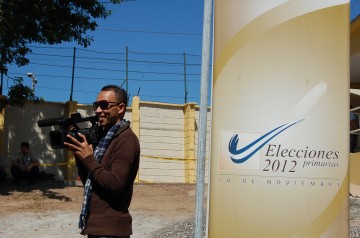 In November, I spent 10 days with people who are in the midst of changing their nation’s history. In the face of deeply entrenched corruption, repression and violence in Honduras, they are nurturing the tender shoots of revolution. They are choosing, for now, the peaceful route.

I travelled to Honduras with a group of human rights activists who were mainly from the United States. We were human rights observers in the context of the Honduran primary election. The delegation was organized by the Alliance for Global Justice and Rights Action. About a dozen of us were in the country for 10 days to meet with members of the resistance movement and to observe the election. Approximately 10 more people joined us for the four days surrounding the election. That group came from El Salvador, the University for Peace in Costa Rica, Ohio and North Carolina.

Our group went to Honduras as human rights observers after an invitation from the coalition for the families of the disappeared (the Comité de Familiares de Detenidos Desaparecidos en Honduras, or COFADEH). Another group of election observers from the Organization of American States, including four Canadians,  also came to the country for the primary election, but were not affiliated with us.

Life felt vital amid the dizzying cacophony of Tegucigalpa, the capital of Honduras. The warm air was thick with the exhalation of the city — exhaust fumes, cooking smells and dust. The constant noise soon became a background hum of yells, laughs, screams and motorcycle engines. 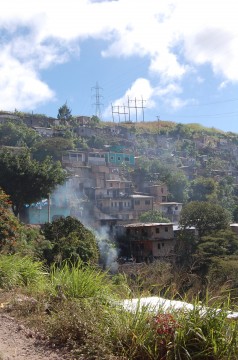 The outskirts of Tegucigalpa

The statistics are frightening when it comes to violence and death in Honduras — it has been dubbed the murder capital of the world by the U.N. —  but the spirit of the people shines through in their smiles and warmth in the face of oppression.

We braced ourselves for the possibility of violent repression or fraud surrounding the primary elections, but voting day was largely peaceful. The day after votes were cast, we visited the final counting locations, where we were given a tour and assured of the transparency and fairness of the process despite some loud criticism.

Our days leading up to the election were filled with meetings. Feminists, politicians, teachers, indigenous people, activists, socialists, farmers and an ex-police officer spent time with us, telling us their stories. A common thread running through all the testimony we heard was the desire for change. The people we spoke to want an end to the type of violence that has Honduras listed as the murder capital of the world. They want an end to what they see as exploitative practices of trans-national companies in their natural resource sector. And they want to reform the laws and power structure of their country.

What is the resistance?

On June 28, 2009, Manuel Zelaya, president of Honduras, was removed from power in a semi-military coup. In the days that followed, the streets of Tegucigalpa were flooded with people protesting the coup. There are also reports of pro-coup rallies in the turbulent weeks surrounding the event. The National Front of Popular Resistance (Frente Nacional de Resistencia Popular, or FNRP) grew from the anti-coup spontaneous demonstrations as individuals and groups of people joined together. Following the general election in November 2009 that brought National Party presidential candidate Porfirio Lobo to power, the FNRP decided to create a political party, Libre, to represent the broad social movement opposed to the current regime and power structure in the country.

The struggle for indigenous community radio

A day into the trip, I stood on the second floor of our hotel in La Esperanza looking down at the courtyard. Two of the delegation organizers stood next to me with our translator recapping the trip so far.

We had driven for about four hours on the Pan-American Highway to get to La Esperanza from Tegucigalpa. Our destination — Utopia — is a centre that COPINH runs in a rural area near La Esperanza for training and meetings within the resistance. COPINH holds the licenses for three community radio stations that it operates in the region. The stations are a platform for the voices of indigenous people who live in and around La Esperanza.

Another arm of the resistance movement involves small-scale farmers, or campesinos, who are fighting for land rights and have organized into the Unified Peasant Movement of the Aguán (MUCA). Joni Rivas is a Libre congressional candidate and the general secretary for MUCA. At a meeting with our group in a safe house in Tegucigalpa the night before the primary elections, Rivas told us the campesinos’ current struggle involves the occupation of lands in the Aguán region — lands Rivas says the campesinos have title to, but are now prohibited from farming as larger landowners set up plantations (fincas) there.

Click here for more on this section. (Contains a graphic image that may disturb some readers.)

Fear underscored the lead-up to the primary elections in Honduras. Fear of fraud. Fear of violent repression. Fear of lining up for the party you really want to vote for and then being ostracized, or worse: losing your job. One of the Spanish-speaking delegates read a notice in a daily newspaper the day before the election warning government employees that if they voted for Libre party candidates, they would be fired. And this wasn’t an idle threat: to choose the presidential, congressional and mayoral candidates for each party, voters had to line up and vote at clearly marked party tables. Your party choice was visible to any co-workers, bosses or neighbours who might be voting at the same time.

I flew back to Canada after a challenging and rewarding trip. Teguciglapa is an intense whirlwind, and the element of danger I was prepared for seems to hang in the very air. Most of the people my group met with told us stories about attempts on their lives or the lives of people they knew and the sight of armed men — military, police or private security — were commonplace. Many questions remain in my mind about the future of the people I met, the cause they are fighting for and a country that is mired in corruption. Will the people I met be alive to see next year’s general election? What will the election look like? Will the peaceful resistance turn to violence in the face of potential defeat in the political arena? I plan to return to Honduras next year to see first hand the unfolding of the next chapter in the country’s history.