Ten days with the Honduran Resistance: The campesino movement

(Contains a graphic image that may disturb some readers.)

After staging occupation of their traditional lands since 2006, the campesinos won back the rights to about 11,000 hectares in 2011, but have been unsuccessful in having the new terms implemented. The group has met with government officials and has brought cases against the landowners to court, but has not resolved the land rights issues. MUCA is now pressuring the government to reform agrarian and land use laws.

Rivas’s account of the current situation in Honduras is much the same as other sections of the resistance. He talked about violence and death threats against the farmers and killings related to their involvement with the Libre party. He said they can’t be physically present in areas where they are campaigning “because there are laws favouring those who carry weapons — the military.”

Our delegation leader, Karen Spring, relayed her own experience with the campesino movement in the Aguán. She showed us pictures of the body of a 69-year-old campesino from the Aguán Valley who was murdered and buried on the plantation of a rich landowner.

Spring said the man disappeared in July and his family began looking for him immediately, fearing the worst because he was a community leader and community leaders are increasingly being targeted.

According to Spring, during their search, the family noticed private guards standing in one area of the plantation. They asked for police accompaniment, and when the guards left the area, the family began pulling back the palm fronds from the ground to find a shallow grave. They dug the campesino’s body up. Spring’s photos show a medical examiner on scene, but she said no investigation has been conducted into the murder. 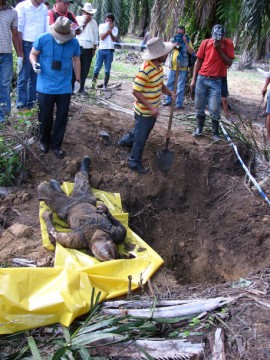 Karen Spring’s photo of the body of a campesino that was found on a plantation.

knee bent toward his chest. A striped plastic bag has been pulled back from where it was covering his face. Was he suffocated? “We don’t know,” Spring said. “The autopsy results weren’t released for a long time. I haven’t seen them.”

The man’s son stands in another picture, his bright blue t-shirt pulled over the lower half of his face, obviously in distress.

There were photos of the community flooding the streets after the family brought the body back in the bed of their truck. Some of the faces are contorted in anger, and some fists are in the air. Spring said the people were shouting, “Justice! Justice!” in Spanish. She added, “Before this, they weren’t politically organized, but they are now.”

She flicked through the photos. Back and forth between a wide shot of the body and a close-up of his head, dirt worked into the farmer’s face, one ear damaged. Have many people she knows been killed? 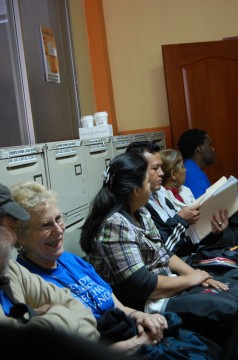 Campesinos wait with human rights observers to give their statements at the public prosecutor’s office.

On the second-to-last day of the trip, our delegation went with nine campesinos to the public prosecutor’s office. The campesinos had been called there because of the ongoing land use issues in the Aguán. Originally, the group thought they were attending court to be sentenced for alleged crimes involving their land occupation, but were told to show up at the prosecutor’s office instead, where they gave statements in response to new allegations that they had threatened a local landowner. They all said the same thing: that they had no knowledge of any threats. They were informed that their sentencing had been stayed until February.

A recent dispatch from MUCA sums up their continuing fight. “We condemn the attitude of some of the repressive state apparatus, pursuing and jailing farmers fighting for an equitable distribution of land.”