Ten days with the Honduran Resistance: The struggle for indigenous community radio

The drive up to La Esperanza offered a glimpse of Honduran life: men on horseback leading loaded-up pack horses, dogs running into traffic, roadside stands and a strong military and private security presence everywhere we went.

We arrived at Utopia and had lunch with members of COPINH. There were no uniforms and no weapons. Instead, there were an open-air kitchen, meeting rooms and bunk beds. As the mist rolled in over the forest, the little facility seemed safe and cut off from the rest of the country. 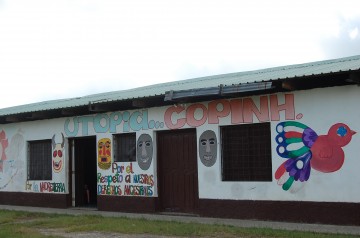 Exterior of the main building at Utopia.

The members we spoke with are from the Lenca indigenous group, who are from the southwest of Honduras and extend into El Salvador.  Salvador Zúñiga, a COPINH spokesman, gave us a brief recent history of Honduras and the political situation and several times referred to Honduras as an economic colony of the United States. Zúñiga said they are resisting the violence and oppression of the regime, which they believe is propped up by the United States government. 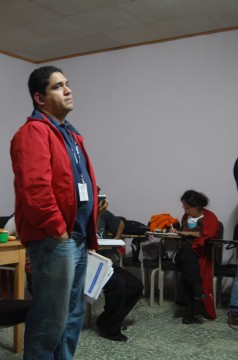 Raúl Canales from Conatel speaks to members of COPINH.

During our meeting with the group, a representative from the National Telecommunications Commission (CONATEL), Raúl Canales, arrived to talk to the group about their community radio stations. Canales was given coffee and a bun when he arrived at Utopia and walked to the front of the room, groaning at the presence of the international human rights observers. He seemed mildly amused at COPINH’s strategy of insisting he speak in front of us.

Canales explained the operator of the 97.5 frequency made a complaint in 2007 that COPINH was operating on a 97.3 frequency and interfering with his signal in La Esperanza. Canales also said COPINH were not allowed to use that frequency and had been assigned another. As a result, COPINH was in danger of having its radio equipment seized. He suggested community radio stations should not operate in the cities, but only in rural communities, something that was met with outrage from Berta Cáceres, a COPINH leader. “Why shouldn’t our voices be represented when we are the dominant group in the area?” asked Cáceres.

Another COPINH representative stood up to point out that the UN Declaration of Rights of Indigenous People and the International Labour Organization Convention 169 protects their means of communication. Rights Action delegation leader Karen Spring pointed out that Honduras is a signatory of both and they should be recognized.

This charge regarding station interference was dismissed by COPINH as trumped-up — the group insists it has the correct licence and that the complaints against the group are part of a scheme intended to silence them. Before Canales left, Spring and Dale Sorensen, director of the Task Force on the Americas in Marin County, California, spoke to Canales on behalf of the human rights group.

In the end, Canales ate dinner with the group and went on his way. He said COPINH had 10 days before their equipment was seized, but insisted Conatel was not trying to shut down the radio stations. He advised the group to hire a lawyer if they want to appeal. He said that if the UN agreement protects their rights, then the lawyers can work it out.

Reporters without Borders has written an open letter to Conatel about this issue with COPINH.