Ten days with the Honduran Resistance: What is the resistance? 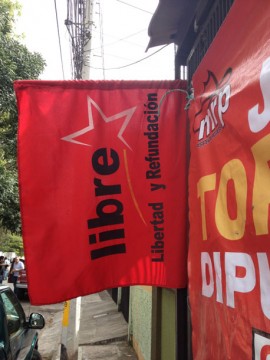 Libre party flags were set up outside polling stations for the primary elections.

In the lead-up to the primaries, we met with a number of Libre Party candidates who outlined the goals and platforms of the party. Land reform, representational congress, transparent government and pushing back against encroaching U.S. economic influence were among the main themes of the meetings. On a day full of meetings for us and campaigning for her, María Luisa Borjas met with us in our hotel. Borjas is Libre’s mayoral candidate for Tegucigalpa, and the former police officer’s platform is focused on a major clean-up of the police force and prosecutor’s office in Honduras. She told us she was kicked out of the police force in 2001 after sending multiple officers to jail for corruption and since then has faced threats and persecution for her continued denunciation of police corruption.

Borjas is worried about increased militarization of Honduran police and society. She explained that the police force is now firing senior officers, some who are corrupt, but many who, she says, are not. She suspects they will be replaced with members of the military, strengthening the military’s influence on police work. 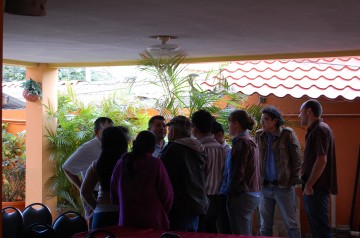 Delegates and Libre Party members talk after a meeting.

Borjas also fears for her life. She said an attempt was made on her life in early November when four armed men in balaclavas and bullet-proof vests got out of a vehicle with no licence plates and held the driver of a car that resembled hers at gunpoint. Borjas said when the gunmen realized the car was not hers, the person was allowed to drive away. Despite the safety risks and a warning from a former colleague that she and her husband should leave the country, she won’t leave Honduras because her family and life are there. “How can I protect myself? I think I am in the hands of God,” she said.

In another meeting, Libre congressional candidate and teacher Yanina Parada recounted the reaction of Honduras’s teachers after the coup. She said the teachers’ union took to the streets along with other protestors against the “breaking of constitutional order.” Parada told us they were victims of physical and sexual assault during the demonstrations, and several hundred were fired or suspended from their jobs for taking part in the protests. She said in most cases, the teachers were informed of the termination by ads in the newspapers. The formal process was only initiated after they had been publicly fired.

She, like many in the resistance, is upset with the distribution of wealth and power in her country. “The rich that own this country and are holding us hostage are the same people that carried out the coup and carry out neo-liberal policy,” she said.

Parada said the teachers’ pension funds have been taken over by private banks. She said that previously, the teachers managed their own pension funds that they paid into on a monthly basis, but now the money is out of their hands and investments are managed by the banks.

Parada is highly critical of new laws that are decentralizing education in Honduras. “The municipalities don’t even have the capacity to provide potable water. If they can’t do that, they will privatize education. It’s already happened with water in San Pedro Sula,” she said, referring to a 30-year contract for water services with private company Acea y Otros in the economic centre of Honduras.

Not everyone in the resistance is in favour of political participation. Members of the feminist movement are skeptical of Libre — not only of the party’s chances in the election, but also of internal positioning of certain candidates within the party. They say they’ve been silenced to some degree when it comes to candidates. They’ve denounced some candidates in the past for aggression toward women, but say other segments of the party advised them to put that aside while the political process is underway. 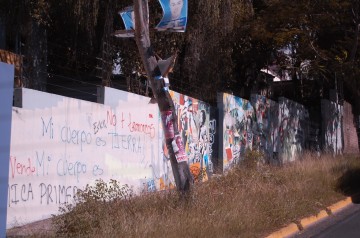 The indigenous group COPINH (The Civic Council of Popular and Indigenous Organizations of Honduras) has also expressed skepticism about the political arm of the resistance. Some complaints stem from the fact that FNRP has stopped mobilizing people into demonstrations while it focuses energy on its political campaigns. Other arguments against taking part in national politics come from a lack of faith in the system itself and the general belief that it will be impossible to win a rigged game.

Libre’s proponents say the creation of the political party is part of a deliberate commitment to a peaceful revolution. Gerardo Torres Zelaya, national co-ordinator for the FNRP and no relation to the ousted president, explains that many people are afraid of the word “revolution” and the violent connotations it conjures. He is somewhat apprehensive of the November 2013 election. “If [the oligarchy] don’t let us win, it’s going to be really hard to ask [the people] for more time and more patience.”

Regardless of apprehension surrounding next November’s election, the enthusiasm of the people involved with the resistance is infectious. They believe in what they are doing, and despite death threats and attempts on their lives, most of the Libre candidates continued to campaign in the lead-up to the primaries.