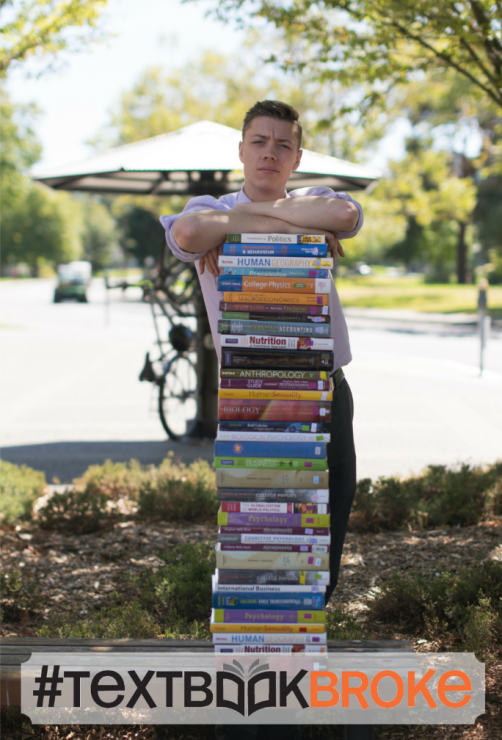 Tired of spending obscene amounts of money on textbooks you hardly use anyway? On Tuesday, Aug. 30, the UVSS announced the start of the TextbookBroke campaign, which hopes to ease the burden on UVic student’s wallets during the back-to-school crunch.

The campaign’s goal is to help save students money through the promotion of cost-saving measures, but the ultimate solution they’re advocating for is professors to adapt their current textbooks to Open Educational Resources (OER).

OERs include open source textbooks available for free online (or printed off at just the cost of the paper), as well as supplemental resources such as online quizzes, videos, and PowerPoint slides.

“We’re advocating for anything to promote textbook affordability, such as more used textbooks on campus and asking the professors if you can use an older edition,” said Nicholson. “There’s a lot of changes that can happen now that can be part of a short-term solution.” Meanwhile, he says the UVSS will be working behind the scenes to push for OERs with faculty and administration.

The B.C. Open Education Project reports that 64 per cent of students don’t purchase a book at some point during their degree due to cost, and 24 per cent will choose to do a course without one. According to their website, making the switch to OERs has saved each student upwards of $1 900 with the 544 open source textbook adaptations already online.

Recently, Earth and Ocean Sciences professor Lucinda Leonard has adopted the textbook she uses for EOS 120 in the hopes that students won’t forego a full education based on textbook cost.

“I’ve heard stories of first-year students choosing courses based on how expensive the textbook is, or whether they will really need it for the course,” said Leonard in a news release. “We’d like to remove any obstacle to students being introduced to earth, ocean, and atmospheric sciences.”

However, some fear that a professor’s abilities to change the content of OERs can create a Wikipedia-style conundrum where the information isn’t always accurate.

Nicholson assures that the campaign is advocating for more affordable options, not options that would jeopardize a student’s education, and will push for government grants for professors to review content to ensure accurate information in the online textbooks.

Another route that 30 per cent of students has taken is illegally downloading online versions of textbooks to cut costs. While the Textbook Broke campaign does not advocate for illegally downloading textbooks, Nicholson says this statistic is a significant sign that the publishing industry isn’t working for students.

“I see that as proof that there’s a failure in the market — that the textbook industry is sort of broken,” said Nicholson.

OERs have already made their way onto some UVic course booklists, though the campaign hopes at least five courses make the switch by the end of school year, particularly for first- and second-year classes in which the information is more generalized.

“The main goal at the start of the year is to really get the conversation going,” said Nicholson.

More information about the TextbookBroke campaign can be found at uvss.ca/campaigns/textbookbroke.