The Martlet often judges the success of a story on how well it resonates with the UVic community. Since it’s hard to gauge the reaction of each person who picks up a newspaper, sometimes, the easiest source of community feedback comes from social media websites like Facebook, Twitter, and Reddit.

We had plenty of stories this year that captured attention on those sites — here are five of the most memorable.

Stories regarding the housing crisis in Victoria definitely resonated with our online readers (check out our top opinion pieces story on page X), and this unique story about a racist landlord was no exception. In February, the Martlet broke the story of Natalia Carranza, a Colombian student who turned down a prospective landlord and, in return, received texts from the landlord that said Latino students were “off the list.” The texts, apparently meant for the landlord’s child, said that only Korean and Japanese students would be considered for renting.

The landlord later sent an apology to Carranza via text, while others on Facebook shared the story and recounted landlord horror stories of their own. 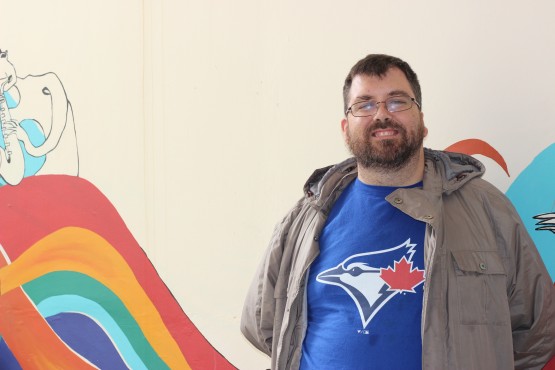 Nathan Bodie, a UVic student with autism, was the subject of media attention after a petition was started asking the university to allow him to participate in convocation. Photo by Sarah Lazin, Staff Writer.

April brought a much more feel-good story to UVic. The story was that of Nathan Bodie, a UVic student with autism who attended classes through a national program named STEPS Forward. At other universities in Canada, students finishing STEPS Forward attend their university’s convocation ceremonies, but this wasn’t the case at UVic. A petition was struck up by Bodie’s friend Julia Templeman to allow STEPS students to convocate, and soon thousands had signed.

The UVic Senate passed a motion allowing Bodie and other STEPS Forward program members to attend convocation and cross the stage. Representatives from the university said they’d been working on making it happen, but the strength of the voices behind the petition surely helped speed up the process.

Bodie was flattered by the attention, but he said it wasn’t why he spoke up.

“I did it to change a policy that so badly needed to be changed,” he said.

In what was one of our most viewed posts on Facebook and Twitter (3 000 views on Facebook, 3 500 on Twitter), the Martlet broke the news that UVic and Sitka had partnered to release a limited line of crew neck sweaters and t-shirts, which replaced the “I” in “UVIC” with the famous Sitka Spruce tree that adorns many of the local business’s products.

The sweaters and shirts became a hit, with many UVic students snapping them up quickly. Other students, however, took issue with the prices: $100 for a sweater and $40 for a t-shirt.

“I have an existential crisis every time I consider buying a $3 avocado at the grocery store,” wrote Miki Wnzi on our Facebook post. “How are students supposed to afford a $100 hoodie?”

In September, screenshots from a Snapchat story came to the forefront of campus discussions. The story showed two students in residence using slurs and derogatory actions against Indigenous communities in Canada.

A select few defended the posts a joke, but most were outraged — including UVic’s president Jamie Cassels, who made a statement condemning the photos and promised a full investigation.

Eventually, the university concluded its investigation and reported that the two students in the photos were engaging in a “restorative process” that would be enforced by the offices of Equity and Human Rights, Student Life, and Indigenous Academic and Community Engagement. 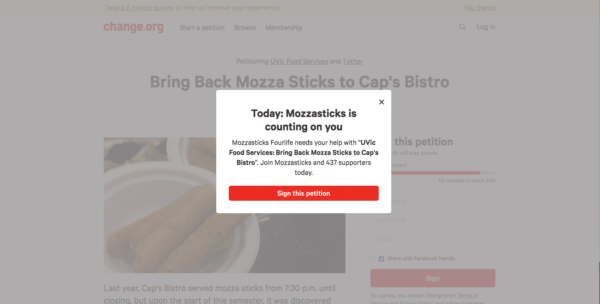 Yes, that’s right. Counting on you. Screenshot via Mozzasticks Petition

There is a small community of UVic “meme groups” on Facebook, posting both UVic-relevant and unrelated joke photos and posters. Sometimes, this loose band of procrastinating students can do great things.

They demonstrated this in September, when UVic Food Services removed the popular Mozzarella Sticks from their residence menus. Students retaliated with a speed and fervour that could only come from cheese deprivation by creating a petition that called for the return of the deep-fried favourite. When the university promised to bring the mozza sticks back (charging a few extra bucks, mind you), students were overjoyed.