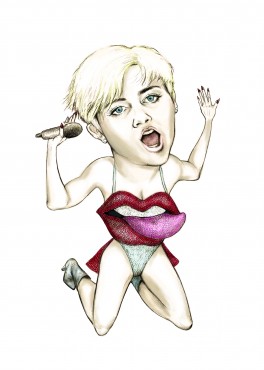 In a haze of essay-writing near the end of term, I bought a ticket to the Dec. 14 Vancouver stop on Miley Cyrus’ Milky Milky Milk tour. I’d hoped that Cyrus, better than anyone, could teach me a thing or two about letting loose and not taking life so seriously. But after a listen through a few of the songs on the Miley Cyrus & Her Dead Petz album, I panicked: not only did the songs sound disjointed, they were boring. When I failed to sell my ticket, I was determined to at least get a scathing rant out of this horrid mistake.

Alas, that rant will never see the light of day, because while there were definitely hits and misses in her show, overall I had a great fuckin’ time.

Upon arriving at the theatre, the first two things that hit me were the colours and the variety. Concert-goers were decked out in unicorn and giraffe onesies. Someone wore tights plastered with Miley’s face on them; another wore a latex leotard a la Miley’s 2013 VMA stunt, matched with a fur shrug, fishnets, and sandals. Others flaunted multi-coloured hair made of small tubes, rainbow helicopter hats, rainbow tutus and one even carried a baby bottle.

As I waited in my seat for the guest of honour to arrive, it suddenly hit me that I was about to see my childhood idol in person. So yes, I did scream my heart out when Cyrus appeared onstage.

Before she started the show, though, Cyrus brought B.C. conservationist Ian McAllister to denounce the current wolf cull planned in B.C. Miley filmed us yelling “Fuck the wolf cull,” “Fuck trophy hunting,” and “Fuck yeah B.C.!” for her to post on social media to raise awareness. “Last time I checked, trophies don’t have a pulse,” she said. With that, my respect for her quickly grew. It reminded me that there was a person under all those sequins and pasties.

The intro to “Party in the USA” played after this sentimental beginning, and I was stoked to let loose to an old-school jam. But it soon morphed into her new single “Dooo It!” instead. As Mylar balloons danced over the crowd, Cyrus happily gyrated in a gold miniskirt with balloons in the shapes of the letters “DO” over her tits and “IT” over her skirt, tongue wagging. A girl dressed as a pot leaf in a rainbow jumpsuit partied alongside Cyrus, while the eight-foot-tall Amazon dancer Big Ashley twerked loyally by her side, attired in moneybag pasties and a rainbow afro.

Following that opening spectacle, the Bangerz hit “Love, Money, Party” sustained the energy of “Dooo It!” if not increasing it. But energy in the room diminished a bit while Miley sang some forgettable Dead Petz tracks. These included “1 Sun,” a tune urging us to save the Earth, for which she dressed as a cardboard-and-tissue-paper sun, and “The Floyd Song,” a musical elegy to her deceased dog. While her vocals were unarguably strong, they could not compensate for the boring melodies or lazy lyrics.

Soon Cyrus changed into a giant baby costume, though, and all was well with the world. If nothing else, I appreciated her ability to make fun of herself. Her lighthearted spirit made everything fun. She performed “BB Talk,” a song complaining about her disgust for PDA, then led up to her next track “Fweaky” by joking: “There’s a first time for everything, but I hope this is the first time you’ve seen a baby strip.”

Her performance of “Fweaky” was definitely a crowd-pleaser. In a low, sultry voice, she crooned, “Shit’s ‘bout to get real freaky” as the light shone on her sexy-dancing in that baby costume. She took her time sensually disrobing in a cage, until eventually she was down to nothing but a high-waisted, pink, crotch-grabbing bikini bottom, pink mushroom-shaped pasties, and a pink wig. And, I never thought I’d say this, but holy shit, she was hot.

The one casualty of the night showed itself during the next song, “Bang Me Box.” I became painfully aware that a mother and her daughter (who couldn’t have been more than 10), dressed in matching green sequined mini-dresses, were standing in the crowd in front of me. It was especially troubling since there were two naked girls running around on the screen behind Cyrus. The mother had her arms wrapped around her daughter, gently swaying, apparently attempting to coax her into having a good time. I wanted to physically pull them out of the theatre. However, they left after a couple of songs, so I was able to enjoy the rest of the show without too much queasiness.

Just when Cyrus’ antics were getting a little old (such as, during her song, “Slab of Butter,” she screamed “I feel like a slab of butter” dressed as a literal stick of butter), crew members dragged a piano onto the stage. From YouTube videos I’d watched of her concert beforehand, I knew that, coupled with her silver sequined jumpsuit and the silver disco ball overhead, there was a high chance she was about to sing “Twinkle Song.” I’d heard her passionate live version on SNL, and was beyond excited about the prospect of hearing it live.

However, she played “Pablow the Blowfish,” a lament to her deceased blowfish Pablow, instead. While it wasn’t the wondrous screaming manifesto I’d hoped for, the song was still emotional, and showed a softer, less in-your-face side of her. By the time she ended the song with an impassioned slam of keys, I’d almost cried from the emotion of it all. The disco ball above reflected white lights all around the theatre, which made for a really special (if mildly visually assaulting) moment.

Her encore started with “Karen, Don’t Be Sad,” a remake of a Flaming Lips demo. Now, you can say a lot of things about Cyrus, but you can’t say that she’s not talented — especially after hearing her sing that song live. Her high notes are fucking heavenly. Her voice filled the Queen Elizabeth Theatre with surprising soul. Even wearing a prosthetic dick and boobs, topped with rainbow hair and a unicorn horn, she managed to look and sound angelic. I think Miley is the only person I will ever be able to say this for.

“We Can’t Stop,” the last song of the night, brought with it a flood of memories and nostalgia. And after an evening of songs about her deceased furry friends, it was a nice way to end the show: a good old-fashioned pop song about drugs, partying, and not giving a fuck, like the tongue-wagging, pot-smoking, twerking Miley we all know and love. With Wayne Coyne, lead singer of the Flaming Lips, shooting confetti out of a cannon from underneath her vagina, Cyrus ended the show with a bang.

My impression of Miley after the concert definitely changed. I admire her not only for her verve to do whatever the hell she wants, but for trying to change the world for the better. And while the new album did not blow me away musically, I wouldn’t trade that Vancouver night for the world. Because for one night, I had a taste of what true freedom felt like.