The results are in: consent is sexy

From the 289 participants of this year’s sex survey (comprised of 284 online, and five who bravely handed theirs in person), we learned about the sexual behaviours of our peers—in some areas, their attitudes and experiences varied greatly, however a few were common.

Of those surveyed, 160 identified as female/women, and 90 as male. Others identified as non-binary, male-fluid, genderqueer, transmasculine and one, of course, as a ‘Polyamorous Attack Helicopter Unicorn.’ The largest demographic (58.7 per cent) surveyed was 19 to 21-year-olds.

Almost half (48.8 per cent) said that they would comfortably have a conversation about sex in public, depending on the place. “Talking about sex as an academic thing is easy for me,” wrote one online participant. “Talking about my personal experiences is a little harder for me to do.”

“The more you talk about it the more normal it becomes, “ advised a 23-year-old female participant. 34.5 per cent of participants said “no” to to talking about sex in public, and 16.2 per cent said they were comfortable in most to all situations.

On the issue of how many times one gets down per week, results were varied. A number of the respondents were in committed, long-term relationships that affected their day-to-day activity stats. “Current partner lives overseas,” one participant explained, “but when together we go at it like rabbits.” According to the comments, sexual activity is very much congruent to relationship status. 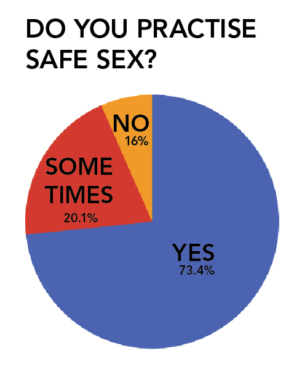 The consistent practice of safe sex continues to be an issue: 72.7 per cent practise safe sex, while 20.5 per cent reported they ‘sometimes’ do, and 6.8 per cent said no. Again, the comments revealed that this is congruent to the relationship status and built on trust.

“Definitely with new partners, but as time goes on and trust increases sometimes be silly and unwrap the willy,” someone wrote. Another said, “My partner and I are fluid bonded.” Almost unbelievably (but not actually unbelievably), the pull-out method is still used among Martlet survey responders. One admitted they know they should use protection but don’t, while another wrote it’s a “non-negotiable.”

Love in sex? Not as much as you’d think

When asked ‘What is the most important quality in seeking a new sexual partner?’—compassion, compatibility and trustworthiness rated high, and physical attractiveness low. Willingness was a high priority: “Consent is pretty sexy,” wrote one. “They want to fuck,” said another. 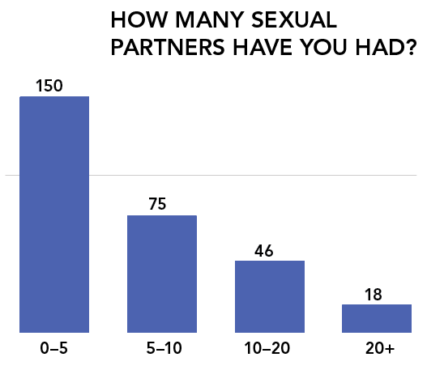 Interestingly, only one respondent answered with “Love.”

Roughly a third of participants have chosen to abstain from sex for a period of time for various reasons: religious beliefs, break ups, mental health care, illness, and recovery from sexual trauma.

Some participants had never engaged in intercourse for reasons ranging from holding out for the right partner to just being “an anxious human.” One respondent said he is looking for a partner with “emotional intelligence and compassion toward an inexperienced male.”

Overwhelmingly the survey group asserted the need for understanding and trust in a partner, and clear communication—the word “consent” kept appearing. Also mentioned was the desire to discuss sex openly—the good, bad, and the kinky in-between—in safe spaces.

But four-fifths love themselves 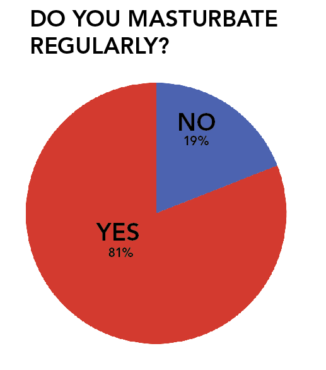 Thank you to all who contributed your candid (and at times, humorous) insights.