The Martlet’s ‘music to make love to’ playlist

It’s Valentine’s Day. You and your significant other come home from a dinner that comforted your stomach and distressed your wallet, and decide to open a bottle of wine. The mood is right, the feeling’s mutual, and all that’s left to do is dim the lights and throw on a playlist.

With dimmable light bulbs for $9.99 at your local Home Depot, the only thing you’ll really have to worry about is the music. So what do you play when you’re in the mood to play?

Like the superhero you never knew you needed, the Martlet is here with some recommendations to turn a night of regret into one you’ll never forget. 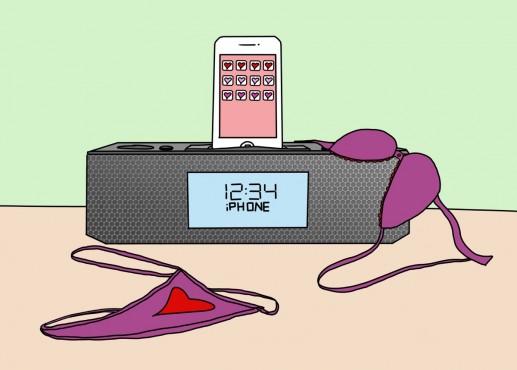 Author’s warning: This is a very subjective list and every person is different with different tastes; if your partner loves the sound of “Yakety Sax” in the bedroom, then all the power to them.

First thing’s first: don’t pick anything too wordy. While rap songs aren’t necessarily out of the question, you’re going to want to pick songs based on atmosphere rather than lyrical relevance. There’s nothing weirder than dead silence interrupted by Eminem talking for 30 seconds at a time.

That’s why something like “Gooey”, from Oxford-based band Glass Animals, is perfect. With warm pads, lots of reverb, and a wicked drumbeat, it sets the mood in all the right ways. Songs like “Drops” and “Beauty Surrounds” by Jungle and Houses, respectively, also play to these strengths. With muted melodies and lots of sustained keyboards they keep the mood mellow, but not too dull.

There is nothing wrong with lyrics all the time, though. Take Chet Faker’s “Talk is Cheap”, for instance. With lyrics like “I wanna make you move with confidence / I wanna make you move alone,” it’s easy to imagine bumping to it in the bedroom. The song is still tastefully done and possesses a thumping bassline that makes it easy to move and groove to.

For something a little bit more up-tempo, check out the Ben De Vries remix of Alt-J’s “Tessellate” or “Captured” by the young Australian singer Olivia McCarthy, otherwise known as JOY. “Tessellate” starts off slow but has a terrific ending, while “Captured” fits perfectly on the edge between pop song and underground dance track. Both songs add some variety to the drum-and-bass feel of the other songs, and both feature lovely vocals.

While original songs are great, there are a couple covers that work well too. Chet Faker’s cover of “No Diggity”— originally by Blackstreet— is a cool and composed tune, with throbbing keyboards and nice choral vocals.

Next in the playlist is another Glass Animals song, this time a cover of Kanye West’s popular song “Love Lockdown”. Featuring the typical Glass Animals groove, it’s probably one of the sultrier tracks on the playlist—and that’s saying something.

But if one song perfectly encapsulates the mood represented in the songs listed above, it’s James Blakes’ “Retrograde”. Recorded on the similarly titled second album, it’s a masterpiece that deserves to be on every bedroom playlist across the globe. Featuring a beautiful hook sung by Blake, the piano, set against the drum pattern, perfectly mimics the romantic but rhythmic tone throughout the playlist. It’s the perfect bedroom song—not too fast, not too slow, nicely atmospheric, and, musically speaking, is a joy to listen to.

Finally—and this is definitely a case of saving the best ‘till last—we have Marvin Gaye’s “Let’s Get it On”. It may seem a little out of place compared with the rest of the playlist, but I’m pretty sure that there’s a law somewhere that requires a Marvin Gaye song on every bedroom playlist.

So before you head into the bedroom completely unprepared, remember that your friendly neighbourhood newspaper is here to help with a 15-song, hour-long playlist that you can find a link to online. Check out the songs that weren’t mentioned in this article, and enjoy.

Let’s Get It On – Marvin Gaye