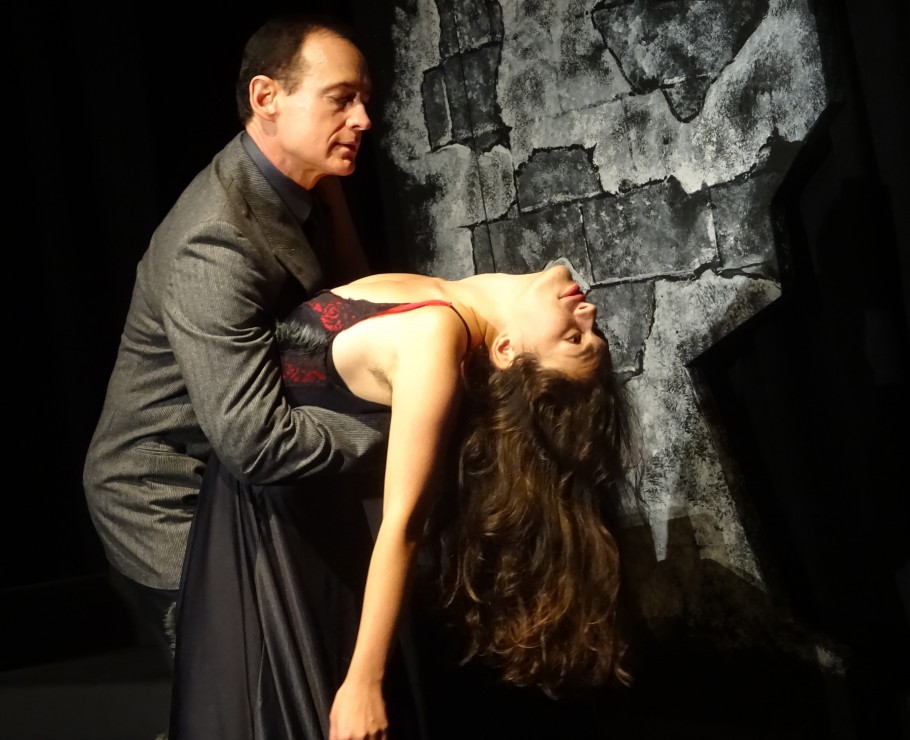 It was with trepid anticipation that I attended a performance of The Mating Dance of the Werewolf at the Innconu Theatre, written by Mark Stein, directed by Wendy Merk and Lorene Camiade. Despite a few stumbles, I found I was pleasantly delighted with the performance.

The play begins by introducing us to Ken (Wayne Yercha), a detective with a mysterious stalker, as he’s questioned by his boss, the leather-coated Raul (Andrew Pirie). The play sets out the conflict from the first line but doesn’t really pick up the pace until later on, as it’s not until the second act that tensions begin to escalate. The plot follows Ken in his strange fascination with new girl in town Abby (Leilani Fraser-Buchanan), whose erratic behaviour has both Ken and the audience questioning her character.

To complicate matters further are Ken’s delightfully dry ex Pam (Renee Yakemchuk) and her unraveling husband Allen (Justin Guthrie), who is also Ken’s partner at the police station. It is amidst the jealous, doubtful and incredulous opinions of these characters that Ken begins his ill-fated romance with the mysterious Abby. What could possibly go wrong?

The actors worked well together as an ensemble, a highlight being a scene at the policeman’s ball. While there were moments of hesitation and stumbled lines, the transition between scenes was smooth. Yercha exuded just the right amount of perplexed earnestness, while Yakemchuk and Fraser-Buchanan crackled with charm and hints of wolf-like ferocity.

The set, props and audio elements of the production also deserve a shout-out. The entire play had the feel of a noir film, from the terse dialogue to the classic backdrops of police stations and midnight cityscapes. Recordings of police radios used throughout also helped move the action along, and reminded us in the audience of the impact the law has over the characters. There is one gloriously surprising, yet inevitable, scene of bloody gore, where props were used to great effect to elicit horrified giggles and groans. These props got the desired effect, and helped highlight the ever-present danger amid the humorous one-liners.

Thematically, the play covers considerable terrain, including the nature of infatuation and the ever-evolving conversation on female sexuality. The humour of the play surprised me, but was also the part I enjoyed the most. The amusing moments were played well to comedic effect, and made fun of the play’s own outlandish premise.

In conclusion, The Mating Dance of the Werewolf is a story of love in a modern age and grapples with the eternal problems of societal expectations and self-discovery. This play is for anyone who has ever been in the torturous grasps of infatuation, jealousy, animal hunger, and even human indecision. It’s a play for anyone who has dated out of their league, or even out of their species. It is for anyone who has had to deal with friends, bosses, exes and everyone else who has something to say about your unconventional relationship. It’s a play that deals with the supernatural but ultimately asks the very human question: Who am I? And what will it cost me to be my true self?