It’s up to 100 times more powerful than morphine, and contributed to 60 per cent of illicit drug deaths in B.C. last year. But why is fentanyl really dangerous?

In the second season of A&E’s Intervention Canada, we met Aimee Parry, a 26-year-old blue-eyed bookworm from Ottawa, Ont.

As per the show’s premise, Parry agrees to be filmed for a documentary on addiction that invariably leads to her intervention.

The audience could be forgiven for thinking the camera is on loop as Parry divides her time between chain smoking and reading volumes of poetry, her eyes rolling into the back of her head, and shuffling her emaciated frame downtown, piecing together the coins, by any means necessary, for her $250-a-day fentanyl habit.

Her addiction narrative feels familiar — from friend’s couches to stranger’s beds and eventually the street. But Parry’s drug of choice at the time seemed foreign.

Viewing the episode five years later, Parry’s story is an eerie foreshadowing of the fentanyl crisis gripping Canada, with fatal overdoses linked to fentanyl in B.C. and Alberta rising from 42 in 2012 to 418 in 2015.

No longer is fentanyl a mystery, as it was in 2012, but the deadliest opioid in Canada.

The history of an epidemic

Fentanyl is hardly new; in fact, the opioid epidemic has been mounting for decades.

Heroin was first refined from morphine in 1874, and fentanyl was developed in the 1959, but it’s OxyContin, a highly addictive painkiller, that is seen as the spark that ignited the opioid crisis. Promising “smooth and sustained pain relief,” as per its label, OxyContin’s 12-hour “relief” soon made its way into the black market.

Since the 1990s, millions of OxyContin pills have been crushed and snorted, dissolved and injected, resulting in an unprecedented number of ‘oxycutions’ — death by pills.

When OxyContin became near impossible to obtain, an entire population was left with opioid habits bigger than their chemists, doctors, and dealers could supply.

Up to 100 times stronger than morphine and available at the street level, fentanyl became the answer for many, including Parry.

“ . . . the Oxy stopped working, I did the fentanyl, and the first time I was hooked. It was stronger, much cheaper and easier to find,” Parry told the Ottawa Sun in 2012, a few months after her story aired.

If you imagine the opioid family as a nuclear one, in terms of potency, fentanyl is the grandfather, and morphine and heroin, the sons (or daughters). Over-the-counter codeine pills would be a second cousin.

Fentanyl is the last stop for chronic pain relief, created for those with an existing opioid tolerance, like a cancer patient that has grown immune to morphine, for instance. Fentanyl’s potency puts first-time users, the ‘opiate naïve,’ at a high risk of fatality, and if one should survive an overdose, their chance of acute brain damage is great.

As with most illicit drug epidemics, regular fentanyl users are adversely affected by the change in the supply chain. By consuming different amounts from different batches, regular drug takers are unable to calculate their tolerance level.

For the regular drug user and first-timer, the drug market has never been more unpredictable. Health experts warn that fentanyl has increasingly been found in non-opioid drugs, including cocaine and methamphetamine, at times unbeknownst to the consumer. In a recent study published by Harm Reduction Journal, clients at 17 harm reduction sites across B.C. voluntarily submitted a urine sample, to which 30 per cent tested positive for fentanyl, despite 73 per cent not reporting have used it.

According to the British Columbia Coroners Service report, fentanyl was detected in 60 per cent of the 914 fatal overdoses from illicit drugs in B.C. last year, an 80 per cent increase from 2015.

Without community intervention, health experts warn, the toll will continue to rise.

A 2015 investigation by The Globe and Mail found that China manufactures variations of fentanyl to service one of the biggest consumers of opioids in the world: Canada, and fentanyl black market continues to expand to service the “new class of drug addict.” 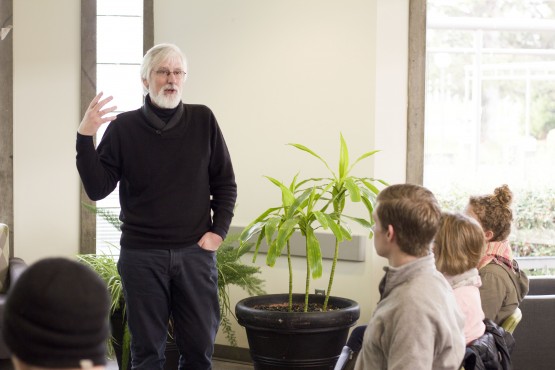 Dan Reist from the Centre for Addictions Research of B.C. speak to attendees of “Fentanyl: Fact and Ficton?” on Jan. 19. Photo by Myles Sauer, Editor-in-Chief

On Christmas Day two years ago, Sgt. Conor King, from the Victoria Police Department, sat at his kitchen table and counted three overdose fatalities in the past 24 hours across Greater Victoria, including Miranda, the 22-year-old daughter of his colleague.

In a reflection published in the Times Colonist, the 16-year police veteran shed the ‘big city problem’ tag of opioids.

“Her death is like so many in this crisis. Miranda wasn’t addicted to drugs. She liked the thrill,” King wrote. “But fentanyl kills indiscriminately. It doesn’t matter if you’re a longtime addict living on the street or an experimenting kid growing up in the suburbs.”

Operating out of a transformed shipping container placed in the courtyard of Our Place Society, a community shelter in downtown Victoria, the site saw 320 people use the facility, manned by a paramedic, mental health and peer workers to manage overdoses.

This temporary pop-up injection site is in operation while an official facility awaits Health Canada’s approval. In January, CHEK News reported that Island Health was “one step closer,” albeit months — and many more lives — away from approving a federal site.

Until the health industry can catch up with the epidemic, the fentanyl problem is left for Victoria’s communities to manage — something that UVic is proactively tackling.

On Jan. 19, as a part of UVic’s Mental Health Week, Dr. Judy Burgess, the executive director of UVic Health Services opened ‘Fentanyl: Fact and Fiction’ at the Student Union Building, an open forum discussion on fentanyl and other drugs.

The 80-plus crowd included academics, health care providers, students, and members of the wider Victoria community who unpacked the opioid crisis from its origin to today.

From the presentation and discussion, one point resounded: the answer to the opioid crisis lies within the community, and that harm minimization is vital.

Understanding the potency and risk of fentanyl is not stopping overdoses in record numbers; the problem is already on Victoria’s doorstep, so what now?

“Everyone is going to make their own decisions. Opiates are highly addictive; that’s beyond our control,” said Laila, who declined to give her full last name, a youth substance dependence worker who takes a harm-reduction approach in her role.

“At the end of the day, we all want to know that we are cared for, that we are safe, and that we belong,” Laila said. “Actions speak louder than words, and providing services like overdose prevention sites, opioid substitution therapies . . . and harm reduction tools, like Naloxone, are one way of delivering that message to the individuals that are being most affected by and are at most risk due to this crisis.”

Naloxone, also known as Narcan, is an opioid blocker that can ‘reverse’ an overdose by a simple injection, similar to an Epipen. Naloxone kits are becoming increasingly available and are on hand at safe injection sites. Take home Naloxone kits are now available without prescription from B.C. pharmacies.

Harm-minimization advocates advise that people who use drugs never use alone and to begin with a small amount. If an overdose is suspected, 911 should be called immediately. Symptoms of a fentanyl overdose include severe drowsiness, slow heartbeat, shallow breathing, cold and clammy skin, and issues walking and talking. Even if Naloxone is administered, you should still call 911.

Harm minimization strategies aside, Laila said that to tackle this issue long-term, we shouldn’t focus solely on the drugs or the addicted but the reasons behind drug use.

“We need to understand why people are using: childhood well-being, trauma, mental health, loneliness and disconnection,” she said. “Mental health in general hasn’t be prioritized as an essential primary health care component. We need to shift the focus and conversations that way.

“Some are using a substance that they know could kill them. Why are they are trying so hard to escape a particular feeling that they take that gamble?”

B.C. may be in the middle of a crisis, but there’s still hope; for those who are addicted, for the families and friends of the overdose fatalities, for the kid who buys the wrong pill this weekend. Aimee Parry, a former fentanyl addict, is proof.

We meet Aimee again in a follow-up special for Intervention Canada filmed when she’s 27, sober and living in a recovery house in Victoria.

Parry appears to be a full-colour version of her previous self, strolling the docks and pausing to feed seals fish. “My life today . . . feels free,” she says.

Since the initial episode and follow-up story aired in 2012, Parry has been focusing on recovering and raising her son. In a Facebook post from June 2016, she wrote: “I have put myself in some horrible places over the years . . . But I know what I deserve.”

Finally, she credits her community. “Thank you guys, you have been my strength.”

With files by Kaitlyn Kokoska

The Vancouver Island Crisis Line offers 24-hour counselling on 1-888-494-388. In the event of a medical emergency, even if Naloxone has been administered, call 911.