In the SUB Upper Lounge last Thursday, Jan. 18, Margo Goodhand addressed students about her recent book Runaway Wives and Rogue Feminists. The talk was presented in conjunction with UVic’s Gender Studies Department and addressed the history of Canada’s women’s shelters — the topic of Goodhand’s book.

The book tells the stories of the women who founded women’s shelters in Toronto, Aldergrove, Edmonton, Saskatoon, and Vancouver in 1973. As Goodhand explained in her talk, Runaway Wives and Rogue Feminists asks, “What kind of social spontaneous combustion produces five different shelters for women in four different provinces all in one year?”

“What does it take for five different groups of women — they were all different ages — to go from deciding something needs to be done to creating a brand new social service?” Goodhand asked at Jan. 18’s lecture, “and how did they manage to talk anybody into paying for these sanctuaries when violence against women wasn’t even an issue? It wasn’t even on society’s radar.”

The event was organized at UVic because the history of Canada’s women’s shelters is not covered in any of UVic’s gender studies classes. Dr. Laura Parisi, the Chair of UVic’s Gender Studies Department, invited Goodhand to talk about her book as a segway into the conversation. 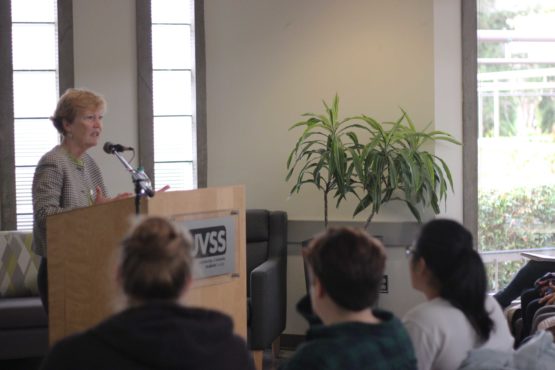 In speaking to Goodhand, you get a sense of someone genuinely drunk on life and passionate about their work. A former editor for the Edmonton Journal and Winnipeg Free Press, Goodhand got the inspiration for the book from her sister, Joyce, who helped found the first women’s shelter in Swift Current, Sask., in 1989 and has worked there for 15 years.

In 2012, the Goodhand sisters quit their jobs and embarked on a cross-Canada road trip to track down these female pioneers.

“[It was] an amazing year for both of us,” Goodhand said. “We talked in this big red van for hours and [my sister] told me stories that I’d never heard before. Plus, I learned a lot about what courage it takes to do this kind of work.”

Runaway Wives and Rogue Feminists is a captivating and interesting piece of long-form journalism — an oral history of sorts. It’s filled with touching first-hand accounts of Canadian feminism’s dark history — a history of violence against women that needs to be confronted if we are to move steadily into the future. It speaks to a quiet revolution that began with these women and continues on today — manifested in the #MeToo and #TimesUp movements.

Because of the female founders’ early advocacy work, both in the media and in their communities, Canada was a world leader in the women’s shelter movement for about 20 years (from the 70s to the 90s). The way Canada tackled violence against women inspired other countries and the United Nations to do the same.

Goodhand summed it up perfectly in her talk.